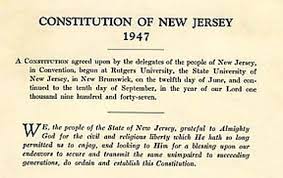 This September marks the diamond anniversary of the New Jersey Constitution Committee (1947) and 235 years since the creation of the United States Constitution. The story behind each text carries a deep historical legacy combined with outlining the goals associated with the ideal functions of national and state governments alike. In research terms, each charter has provided extensive scholarship opportunities for the public that the Seton Hall University Libraries has supported over the past several years.

The United States Constitution is the recognized law of the nation which outlines how the government is required to function. It makes provisions for three distinctive divisions of authority – Executive, Legislative, and Judicial. Since 1787, the Constitution proper has been amended 27 times (with the first ten constituting the United States Bill of Rights created on September 25, 1789 and ratified in 1791) through its history and is devoted mainly to individual liberties.

Combined with the abovementioned overview, Articles III-VII principally cover State-focused governance issues. New Jersey was the third state to ratify the United States Constitution in 1789 and in large measure this helped to inspire the content found within the New Jersey Constitution and its two post-Revolution versions. This document is based on the previous State Constitution of 1776 and the first major revised manuscript in 1844 which highlighted such freedoms as religious practice, speech, and related liberties. After a century, the need for an updated State Statute was facilitated through the creation of Governor Alfred E. Driscoll’s Committee on Preparatory Research in early 1947.  (“Convention Proceedings Record,” State of New Jersey Constitutional Convention of 1947, v.1, iii-1) 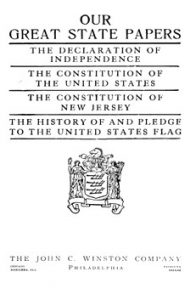 Between June 12th and September 10th of 1947 (a deadline of September 13th for close of the Committee Hearings was set ahead of time and met), the Delegates produced a final draft of the newly updated State Constitution. This document was ultimately ratified via a majority vote on the referendum presented to the citizens of New Jersey during the Election of 1947 held on November 4th of that year. (“Convention Proceedings Record,” State of New Jersey Constitutional Convention of 1947, v.1, 923)

During the 1940s-60s, Students in New Jersey Were Presented With a Copy of the volume – “Our Great State Documents” as part of their study on Citizenship

There are numerous study prospects for both the United States and New Jersey Constitutions and user friendly access points available through the Seton Hall University Libraries including the following leads and links highlighted below . . .

For more information on the history of constitutions please feel free to contact Alan Delozier, Humanities Librarian at Alan.Delozier@shu.edu or by phone at: (973) 275-2378