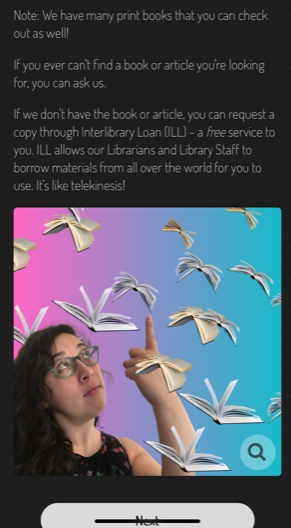 Did you know that all first-year students enrolled in University Life complete our app-based library scavenger hunt for course credit? See below to check out some highlights.

The app, created by members of our Library Instruction Committee (Brooke Duffy, Gerry Shea, Chelsea Barrett, Kaitlin Kehnemuyi, with consultation from Archivist Sheridan Sayles), was conceived in 2019 by Brooke Duffy, Coordinator of Instruction Librarian and Hezal Patel, Assistant Dean of the Center for Academic Success. Prior to 2019, first-year students took a librarian-led group tour of the library as part of University Life.

This self-guided, app-based scavenger hunt allows students to learn at their own pace about all of the many resources the library offers and to become comfortable in the space. Students are also asked to complete small tasks and answer questions to check their knowledge along the way. Last year we added a theme to the scavenger hunt loosely based on the Stranger Things television series on Netflix. This year we offer both an in-person version of the app and an entirely virtual version.

Here is the “trailer” for the Scavenger Hunt, introducing our team of instruction librarians!

Below are some screenshots from the scavenger hunt app, which is hosted by the ActionBound platform.

The Fall 2021 Edition of ‘The Whipstitch’ Newsletter Now Available. View it here. 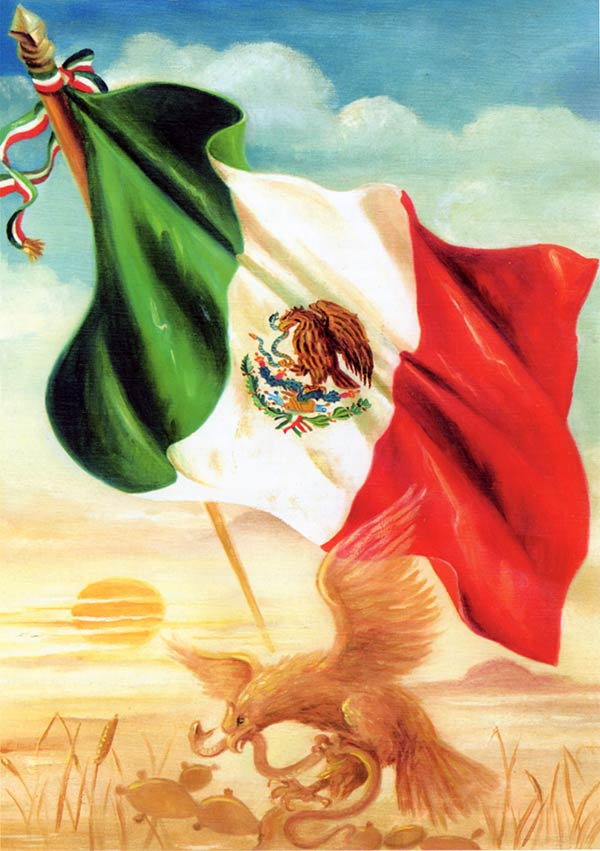 Introduction – Treaty of Córdoba & Cessation of the Mexican War of Independence

This year marks the two-hundredth anniversary marks the conclusion of the Mexican War for Independence (1810-1821) made official by the signing of the Treaty of Córdoba. This particular conflict involved the occupational forces of España and the native citizenry of Mexico which included members of the Mestizos, Zambos, and Amerindian tribes along with sympathetic Mexican-raised Spaniards who rebelled against their colonial overseers. Organized by the first rebel leader Hidalgo y Costilla, a band of revolutionaries invaded the town of Guanajuato which hosted a Spanish-operated central mining center on September 15, 1810. The invasion proved successful, and this date has since become known as Mexican Independence Day. This insurgency led to further skirmishes and battles over the next decade plus which illustrated the inequity found in royal rule.

There were a number of rebel setbacks as they encountered resistance from the better armed Spanish-armed colonial forces, but the Mexicans had strength in numbers featuring 80,000 troops to 14,000 for the Spaniards. By 1813 positive strides were made in terms of geographical and strategic movement when the key cities of Oaxaca and Acapulco were captured by the rebel forces. Inspired by these successes, a “Solemn Act of Declaration of the Declaration of Independence of Northern America” was drafted that served as an important foundation document in the historical evolution of Mexico and her independence that same year.

Armed fortunes turned during the Siege of Cuautla in 1815 when the tide of conflict successes changed as governmental issues both within Mexico and abroad helped to weaken the ruling regime. Thereafter, a series of local and sporadic attacks ultimately led to victory by the native population of Mexico and the conclusion of Spanish rule altogether on August 24, 1821.

Treaty of Córdoba (Copy of the Original Document – 1821)
https://commons.wikimedia.org/wiki/File:Tratados_de_C%C3%B3rdoba.JPG

The Orden Hijos de América (Order of the Sons of America) was founded in San Antonio, Texas on October 13, 1921. In the process the 37 individuals who formed this group were part of the first formal Mexican American civil rights organization active within that state. Their primary mission was to achieve fair access to education, housing opportunities, fair labor wages, and having all the rights outlined within the American Constitution. Additional members would join this movement that expanded into the hundreds as the organization was restricted solely to United States citizens of Mexican or Spanish extraction and over the age of sixteen. The Order obtained a state charter in 1922 and subsequently opened additional chapters throughout Texas.

Our reference librarians are glad to assist with specific works and additional information (along with refreshing links) along with Spanish or English translations as needed. Additional resources on all aspects of the Latino experience are also available for consultation and information sharing. Please feel free to reach out and setup a research appointment via the following link – https://library.shu.edu/library/research-appointments found on the University Libraries Homepage or for unique primary source materials via the Monsignor William Noé Field Archives & Special Collections Center.

Thank you in advance for your interest!