The Fall 2021 Edition of ‘The Whipstitch’ Newsletter Now Available. View it here. 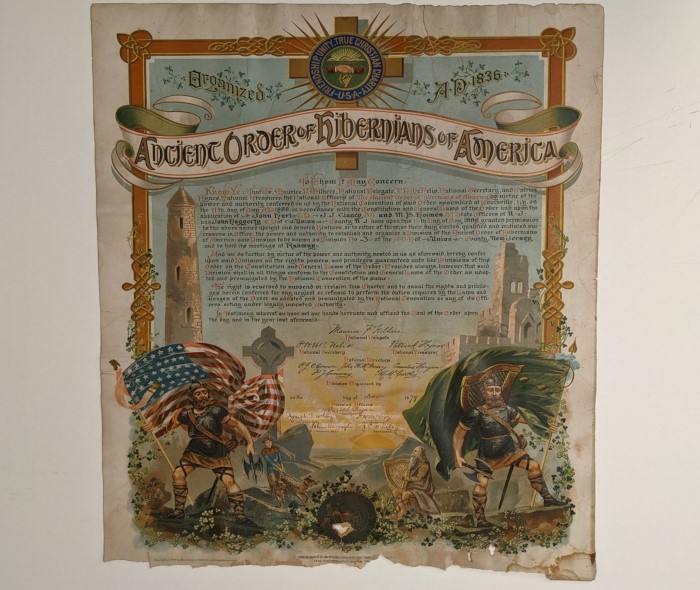 The Monsignor William Noe Field Archives and Special Collections has received a grant from the New Jersey Historical Commission to process its collections documenting Irish immigrant history. The project, titled “Irish Immigrant Solidarity in New Jersey, 1870-Present,” will organize and preserve an enormous collection of papers donated to the archives by John Concannon, the historian of the Ancient Order of the Hibernians, as well as three smaller collections: records of the Montclair chapter of the Knights of Columbus, the papers of James McFarland which document the activities of the Trenton branch of the Ancient Order of the Hibernians, and the records of the Ancient Order of the Hibernians from Bergen County and Rahway. These records build on Seton Hall’s long history of engagement with Irish American culture to illustrate the communal bonds that supported these immigrants as they built new lives in America. Immigrant history is a particular strength of Seton Hall’s Special Collections, and this grant will assist the archives in the preservation of this history for future generations, as well as sharing it with students and faculty today. 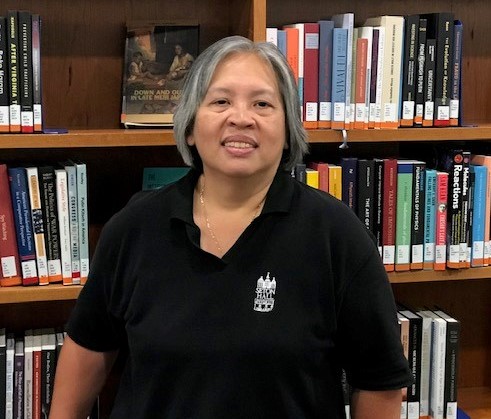 Mabel A. Wong’s friendly and familiar face has been seen at Walsh Library since it opened in 1994. Mabel, the Walsh Library Circulation Supervisor, received her 30-year Seton Hall service award in March. The original ceremony was postponed last year due to the pandemic and held on Teams this year. Associate Vice President for Human Resources, Michael Silvestro, presented the service award to Mabel. University President, Dr. Joseph Nyre, also spoke at the event. Mabel was presented with a certificate and a pin to commemorate her 30 years of service to the University. Mabel has “a whole collection of pins” for each milestone year she has served at Seton Hall. Mabel was also awarded the McQuaid Medal for Distinguished Service in 2010.

Mabel, the longest tenured employee at Walsh Library, started as a circulation clerk at McLaughlin Library in April of 1989. McLaughlin Library preceded the Walsh Library on the South Orange Campus. Mabel said, “I think back to when I started and it’s a world of difference.” There was no automated circulation system and the circulation staff used punch cards to check books out. Mabel also typed out overdue notices that were sent out by mail. The circulation desk was busier because reserves were available only in print and the ten microfilm machines always had people waiting to use them. Mabel thinks things are better now because the library provides easier access to more information. The best part of the job for Mabel is talking to the students. She is still in touch through Facebook with students she knew from McLaughlin Library. Thank you to Mabel for her exceptional and dedicated service. We hope to see her friendly face at the Walsh Library circulation desk for years to come!

#SHU_Libraries is pleased to announce the latest edition of the library newsletter “The Whipstitch” is now available!

View the March 2019 issue of  The Whipstitch.

#SHU_Libraries is pleased to announce the launch of a new library newsletter, dubbed “The Whipstitch”.

View the September issue of  The Whipstitch.

It’s expected to be produced 2 or 3 times a year. We hope you enjoy it!

Check it out here!