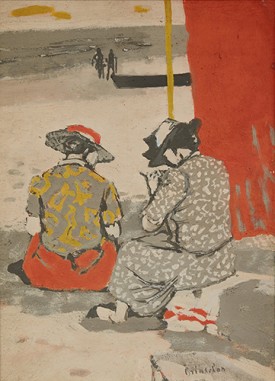 The exhibition examined the public and private lives of husband and wife painters, Maurice Brianchon and Marguerite Louppe, both of whom lived and workedin France in the pivotal time leading up to World War II, through the late 1970’s. The exhibition was curated by David Hirsh and William Corwin.

The program is part of the “Critical Issues in Information and Education” Speaker’s Series by University Libraries. The event is free and open to the University community. Light refreshments will be served.

“The Institute for Communication and Religion is excited to partner with University Libraries for this important discussion,” said Monsignor Mahon. “I hope the event provides attendees with the opportunity to understand how communication and religion are integrally connected.”

Dr Choi, an associate professor of religion, is an ethicist, specializing in Catholic and Protestant moral theology, political theory/ethics, and the political morality of race and ethnicity. His teaching areas also include the ethics of war and peace and the relationship between science (evolutionary theory) and theological ethics. He earned his B.A. and a M.Div. from Yale and his Ph.D. from Boston College.

The University Libraries’ Speaker’s Series, “Critical Issues in Information and Education,” focuses on the intersection of educational and informational issues. Its inaugural event on issues of mass communication featured John Berry III, former editor-in-chief of Library Journal, on misinformation and Dr. Christopher Tienken, associate professor of education administration at the University, on the false narrative surrounding the current educational testing regime and educational standardization. Its second program, Discursive and Demographic Dysfunction, Or, Why It Is So Hard To Decide What The Facts Are, included Rutgers University Professors Marie Radford, Library and Information Sciences, on narratives of information seeking and Julia Sass Rubin, School of Planning and Public Policy, on legal challenges to academic inquiry.

Launched in Fall 2017, the Institute for Communication and Religion provides a nexus for ongoing scholarly exploration of communication topics critically important to religion and society. Under the leadership of Monsignor Mahon and inspired by Nostra Aetate, the Institute enhances the University’s and the College’s sustained leadership in fostering open, clear dialogue and study between religious believers and the broader public in the communication disciplines at the theoretical, professional, and practical levels.

To learn more about the Institute for Communication and Religion, please contact Monsignor Dennis Mahon.

Throughout March, April and May, the initiative, called “South Orange/Seton Hall Connected,” will feature events meant to help South Orange citizens incorporate technology into their daily lives. Dr. Mary Balkun, a department of English professor and chairperson, explained in an email why she and Dr. Marta Deyrup started the initiative. “We were inspired by several things, such as recent political events, especially the importance today of digital skills and awareness for things like voting, news acquisition and evaluation, and communication. ‘Digital citizenship,’ especially how people can become more engaged in their communities via the digital, is also a growing area of interest,” she said. Balkun said that they are interested in helping strengthen the connection between the University and South Orange.

“Digital Humanities as an area of study is committed to the public nature of scholarship and information, and so we decided to reach out to leaders in South Orange to see how we might create a series of events that would explore digital citizenry in a variety of ways,” she explained.

Deyrup said that there will be a symposium held on May 6 to explore the topic of what it means to be a citizen in this age.

“We are calling this being a ‘digital citizen’ since so many of our activities take place online or involve the transfer of electronic data. Does place matter? How do we engage with society if much of that society is now global?” Deyrup asked in an email. “Our panelists will talk about these and other questions as well as give some predictions of what a “technified” South Orange will look like in fifty years.”

Emily Brostek and Claudia Preza, both graduate students in the Master of Arts Museum Profession program at SHU, are the independent curators at the Pierro Gallery of South Orange, which will open on April 19 from 7 p.m. to 9 p.m. The event will run until May 19.

“Since November 2017, the both of us have been researching and preparing ’tech (in)dependent’ which explores people’s personal attachment to devices and an almost universal dependency on them to carry out tasks both ordinary and extraordinary,” Preza wrote in an email.

Staying true to the topic of digital citizenship, Brostek and Preza have selected artists who are portraying the concept in their works.

“The artworks selected from each of the artists deal with the concept of digital citizenship and technological culture through their own unique interpretations and through different mediums (paintings, prints, videos, performance art, and installation),” Preza said.

Alexandra Altramura, a junior biochemistry major, mentioned that senior citizens and individuals from lower income areas can benefit from the initiative.

“People who are sixty-five or older may not be as aware of technology as everyone else because they aren’t as into the media as we are, so I think it’s great for them. And also I think these programs will help people in the low income areas, especially in South Orange become more aware of the resources they have around them,” Altramura said.

Senior Mark Uriarte, an English literature and computer science major, expressed his apprehension about technology.  But his belief is that the initiative can provide new opportunities.

“I’m a little fearful for the future when technology starts taking over society, not in the ‘Terminator’ sense, but in the tasks we have people do now, so that’s where I’m starting to get a little fearful. I’m happy, though, that people want to learn more about technology and want to seek new productivity. I’m impressed that [the Committee] wants to move forward with this initiative,” he said.

Sophomore Patrick Condon, a sports management marketing major, was pleased to hear about the 3D printing program that the South Orange Public Library will be hosting on March 24.

“Personally, I think those kinds of technological things can only help create a better learning environment, especially 3-D printing. I’ve seen people make tables out of an app on your computer and I think that can only be helpful,” Condon said. Balkun encourages any student interested in being involved with the three-month series of events to contact her at mary.balkun@shu.edu or Deyrup at marta.deyrup@shu.edu.

Originally published online in The Setonian by Kaitlyn Quinn on Mar 21, 2018 [link]

Proclaiming a Republic: The 1916 Rising

We are pleased to announce a new exhibit on the 1916 Easter Rising which is being hosted by the Walsh Library Gallery and Archives & Special Collections.

The Easter Rising also known as the Easter Rebellion is perhaps the defining moment in modern Irish history. The Rising set the stage for events that changed the course of Irish history. However, the event itself was hampered by confusion and lack of support. On Easter Monday, April 24, 1916 rebel leader Pádraic Pearse read the Proclamation of the Republic from the front of the General Post Office (GPO) to a small and disinterested group of Dubliners.

To learn more, please visit our exhibit on the Easter Rising, Proclaiming a Republic: The 1916 Rising, on the first level of Walsh Library viewable in the display window adjacent the Walsh Gallery.

You can also learn more by reading The Rising: Easter 1916 by Fearghal McGarry. This book focuses on the experiences of the people who participated in the Rising. McGarry uses eye-witness statements to tell the story of the rebels:

Additionally, the Seton Hall University Libraries provide access to some excellent documentaries on the Rising through our Kanopy streaming service. Liam Neeson narrates 1916: The Irish Rebellion a three-part series on the Rising from the Irish perspective. And The 1916 Easter Rising from the Great Courses series, provides the details of Easter week and its aftermath:

All books and facsimile images for this exhibit are provided courtesy of the Archives & Special Collections Center and Seton Hall University Libraries.

#SHU_Libraries & The College of Arts and Sciences present a talk by Prof. Jorge López Cortina, of the Dept. of Languages, Literatures, and Cultures:

THIS TALK IS OPEN TO THE PUBLIC

Prof. Jorge López Cortina, of the Dept. of Languages, Literatures, and Cultures, will discuss the Cham Heritage Extension Program, a literacy project that ran between 2011 and 2017 and saw the first formal attempts to produce literacy materials for the Western Cham language and train instructors as advocates of Cham literacy to the wider community.

Initially envisioned as a small literacy project for a few villages, the program produced six textbooks and language guides, trained more than thirty Cham teachers, and served over 2,400 students. Most importantly, the program has expanded the scope of use of the written Cham language, producing not only textbooks, but children books, books of poetry, and a monthly general interest publication, Mukva, the first ever Cham language periodical. The program also established the Cham Language Advisory Committee, a body that watches over all these initiatives in order to ensure that the process of normalization of the Cham language is steered by the Cham community.

The Cham are a Muslim minority in Cambodia, an overwhelmingly Buddhist country. The Cham language belongs to the Austronesian family, which includes Tagalog, Malay and Hawai’ian, and is unrelated to Khmer, the majority language in Cambodia. Cham is the first Austronesian language documented, with texts going as far back as the 4th century CE. In spite of the rich history and literature of the Cham language, Cham literacy has been in decline for centuries, as Vietnam gained influence in the region and finally annexed the remains of the kingdom of Champa in 1832.

Prof. Jorge López Cortina is currently the director of the Spanish Program at Seton Hall University. Besides his involvement in Cham literacy projects, he has authored several texbooks in Spanish and coauthored the Khmer textbook used by the Peace Corps in Cambodia.