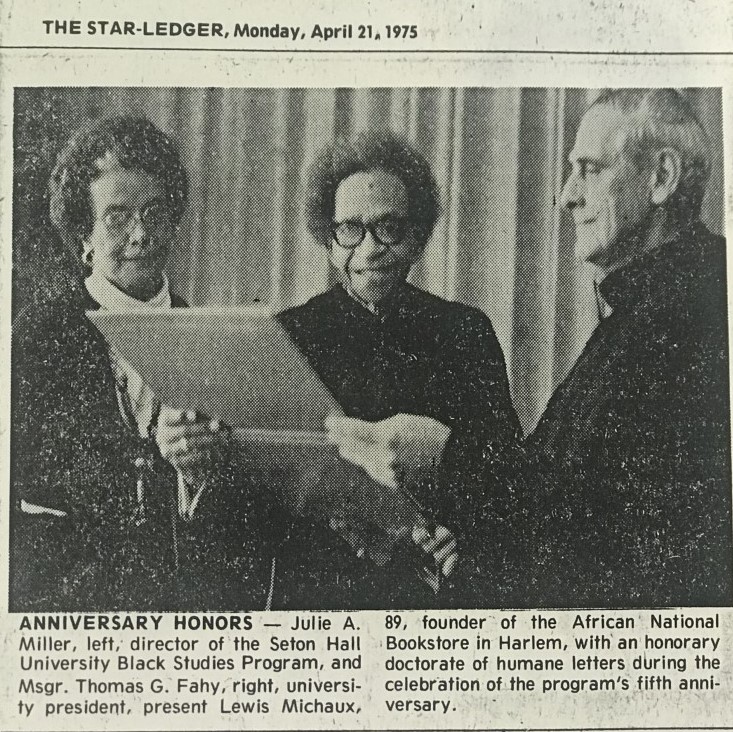 I learned about Monsignor Fahy in the spring semester of 2018. It was at an intergenerational panel discussion at the Walsh Library of former Seton Hall student-activist leaders. The event was organized by the Concerned 44, an activated student group. The panel discussion was a teach-in about the history of protest on Seton Hall’s campus and discussion about the progress of the then student movement. You can follow the Concerned 44 on Instagram. If it weren’t for this panel discussion I would not have learned about President Fahy and I’d still be pronouncing Fahy Hall wrong. As an alumna, I can’t help but be angry that it took this long. I became more interested and invited colleagues into the journey of getting to know Fahy.

Alan Delozier, University Archivist, did the work to uncover the Fahy Inaugural address which is as relevant today as it was 50 years ago. The CORE has integrated the speech as a required reading for the Journey of Transformations course. And this article intends to showcase a digital

communal reading of the text as an activist performance practice. The point of the project is to position the text and its ethos as a cultural imprint on our collective memory. To me, Fahy is a white anti-racist abolitionist ancestor who risked and used his power to benefit others. Social justice is a term we’re hearing a lot. What is it? How do you define it? What does it look like? Everyone will have a different answer. I define it as: righting a wrong. If it doesn’t right a wrong, it is not justice. Not only did Fahy leverage his power to right a wrong with some of the most impactful undertakings of Seton Hall’s history but he acknowledged the problem. Often, we rush to solutions without first doing the self interrogation to name the problem. He used this moment, his inaugural address, when everyone was listening and we’re still listening 50 years later.

The video, this collective recitation, brings many voices together for one message. Faculty and students, separate, but together. It carves a lineage. There are protests now as there were 50 years ago. In the streets and on our campus.

Greg Iannarella offers insight into what moved him to gravitate toward one of the most unwavering parts of Fahy’s speech, “This section always felt really powerful to me. The description, the intentional language, invoking real scenes and real communities, conjuring the people! It’s a moment where he turns the gaze outward and challenges the audience to see what is relevant.”

Participants were encouraged to think about their location as a backdrop. These choices offer additional meaning and subtext. Virtual performance lets us become our own set designers. Brooke Duffy presented her portion outside of a new school. “It is a public elementary school in Teaneck that was recently renamed for Theodora Smiley Lacey, a civil rights activist, ‘living legend.’ The NorthJersey.com website describes, ‘it was because of her efforts that Teaneck became the first city in the United States to voluntarily integrate its public schools.’”

This isn’t the last we’ll hear of Fahy’s address. Jon Radwan describes a new participatory oral history project designed to ensure access, inclusion, and equity in its research process to document and preserve the entirety of this part of the University’s history. “We are confident that the Inaugural Address is only the beginning of learning about Msgr. Fahy’s social justice leadership. Our recent proposal to the New Jersey Council for the Humanities seeks funding for a large scale oral history project. We plan to contact alumni, faculty, and administrators who worked closely with Fahy to record their stories about SHU’s collaboration with Newark activists to launch the Black Studies Center.” To support this project please contact Angela Kariotis and Jon Radwan.

Centering historical figures creates their own mythology. Retrospectives are not without their limitations. But there are so few white allies to look up to for this work. Allies must dig deep, activating themselves, stepping into their consciousness. We can extend the Fahy legacy and course correct. Like 50 years ago, it is a transformative yet fragile time. We must have the will to meet it.