With March upon us an increased interest in learning about the culture, history, individuals, events, and traditions associated with the Irish experience is both evident and welcome!  However, when it comes to finding resources related to both Éire proper and Irish-America alike we offer year-round opportunities to study a wide-range of subject areas related to, and inspired by Ireland proper. 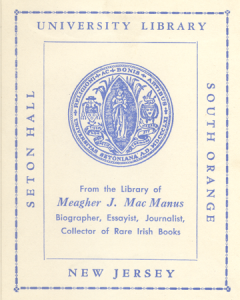 The Archives & Special Collections Center at Seton Hall University features a group of printed volumes from the collection of Irish literary figure and noted book collector Michael Joseph (Meagher) MacManus (1888-1951) who wrote various nationalist-themed books and worked as editor of the Irish Press from 1931 until his death two decades later. This library includes over 3,000 titles dating from the seventeenth century to the present day and covers several different aspects of Irish and Irish-American life including culture, geography, literature, politics, biography, history and religion. Nearly all editions are printed in either English or Irish (Gaelach).  The core of this collection consists of acquisitions secured by MacManus during his lifetime, but arrangements have been made to add latter day works to what has become a continuously expanding bibliography. 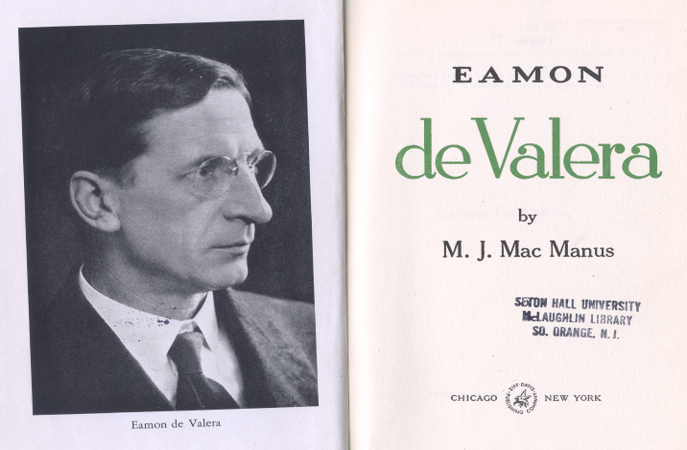 Most of these volumes of the volumes found in the MacManus Collection are housed in our repository, but many non-rare titles featuring a connection to the Ireland and Irish-American experience in some manner are also included via our databases (including the JSTOR Irish Studies Collection – https://www.jstor.org/subject/irishstudies and the digital Irish Times and Weekly Irish Times [1859-2015] – https://search.proquest.com/hnpirishtimes/index?accountid=13793) along with various e-books or print volumes in our Main Collection and assorted Reference Collection holdings.  More information can be found via our Irish Studies Research Guide – https://library.shu.edu/Irish-studies

and complimented by one specializing on Irish Literature: Past and Present – https://library.shu.edu/irishlit compiled by Professor Gerry Shea.

Another collection donated by Rita Murphy (1912-2003), achieved status as one of the first female graduates of Seton Hall in 1937, prior to becoming a long-time director of the Irish Institute at Seton Hall during the 1950s and 1960s.  She also hosted a weekly Irish Music Program on W-S-O-U FM, South Orange and frequently appeared on local television.  Her collection of nearly 1,000 titles are complimented by other important works donated by prominent donors of Irish titles including the recently acquired Emmet-Tuite Library of volumes focusing on varied aspects of the Irish experience printed between from the 16-19th century, noted New Jersey based journalists Barbara O’Reilly; Jim Lowney and noted advocate Jim McFarland whose bequest centers on focused materials related to political issues in Northern Ireland over the past few decades.

Counted among our major subject collections featuring Irish subject matter include the reference papers of John Concannon (1924-2011) former author, publicist and National Historian of the Ancient Order of Hibernians whose voluminous source material on Ireland and Irish-America is especially detailed with particular emphasis on parades, noted political and military figures.  In addition, the Center houses microfilm editions of the National Hibernian Digest (1905-97), Hibernian Journal (1907-69), and Convention Proceedings of the AOH in America (1888-1990).  Various materials including ledgers, documents, and other items representing the New Jersey AOH have also found a central place within our collection. 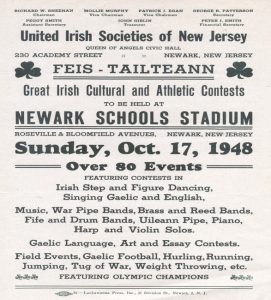 When it comes to family ties and Irish-connected genealogy, the presence of church census data, select religious community information, educational files and various institutional and parish records are also found within this collection. Original and microfilmed nineteenth and early twentieth century sacramental registers from both current or closed parishes and various local cemeteries provide a wealth of data for those conducting genealogical research for their Irish and Irish-American ancestors either on-site or via mail inquiry. Supplementing these distinctive resources are bound or microfilm copies of Catholic Almanacs and Directories dating from 1851 onward. 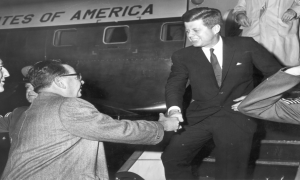 For more information about these, and other resources, and/or to schedule a research appointment please contact Alan Delozier, University Archivist/Education Coordinator via E-Mail:  Alan.Delozier@shu.edu or by Phone: (973) 275-2378