Books by or about Cardinal Newman in honor of his beatification 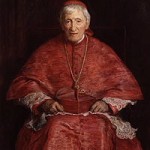 on Sunday, September  19th, 2010, during the Pope’s visit to Birmingham, England. We hope that you will find these books by or about Cardinal Newman  interesting & educational as well as enjoyable!

Newman was the great 19th century preacher and author of “The Idea of a University” and other classic works. He converted to Roman Catholicism in 1845. His 1865 Apologia pro vita sua was a defense of his conversion.

Finals are coming... (pt.1) We have extended hours