The tumor microenvironment (TME) includes a host of cells (mesenchymal, immune, vascular), cytokines, and other signaling molecules that serve to abrogate the innate and adaptive immune responses against the tumor. This is appropriate to maintain tissue homeostasis, and to prevent autoimmunity after the rogue cancer cells have been eliminated. Cancer cells co-opt many of these pathways to terminate the effective immune response so that they are not wiped out, rather, proliferate, invade, metastasize and kill,

The most amount of attention in clinical trials is being directed toward anti-PD(L)1 strategies, which are proving to be extremely clinically beneficial. IDO (indoleamine 2,3 dioxygenase) is an enzyme that catalyzes the first step in the metabolism of tryptophan, which is needed for healthy functioning of CD8+ T-cells in the TME. Cancer cells over-express IDO, thereby reducing the amount of tryptophan in the TME and squelching CD8+ T-cell activity.

Adenosine is another molecule that is present in the tumor microenvironment that modulates the anti-cancer immune response. It is generated in response to proinflammatory stimuli induced by hypoxia or ischemia – release of ATP into the extracellular space leads to its conversion by CD39 to AMP, then dephosphorylation by CD73. There are multiple types of adenosine receptors on cells in the TME – A2A and A2B receptors serve to promote an anti-inflammatory immune response to reduce tissue injury. However, chronic high levels of adenosine in the TME in the hypoxic tumor environment leads to immunosuppression via dysregulation of effector immune cells.

Rapid proliferation of tumor cells in a manner unsupported by surrounding vasculature leads to the development of hypoxic regions within solid tumors. Although hypoxia increases cell death due to oxygen and nutrient deprivation, it also promotes selection of resistant, aggressive cancer cells able to survive in unfavorable conditions. Hypoxia-resistant malignant cells phenotypically possess stem-like features with greater proliferative and migratory capacity. This correlates with increased risk of metastasis, reduced responsiveness to conventional therapies, and ultimately poor prognosis for patients. Hypoxia-inducible factors (HIF) initiate differential transcriptional regulation in response to hypoxic conditions, influencing cellular metabolism and angiogenesis, in an effort to ease oxygen requirements. Identification of HIF1α-driven CD73 (NT5E) and CD39 (ENTPD) transcriptional activation in epithelia and endothelia provides an important link for hypoxia-mediated adenosine production. Modification of the HIF1α binding site situated in the CD73 promoter abrogated transcriptional response indicative of a direct regulatory relationship. Similarly, hypoxia-controlled HIF1α-induced expression of the A 2B adenosine receptor was identified, representing a coordinated response that may contribute to autocrine and paracrine adenosine signaling. 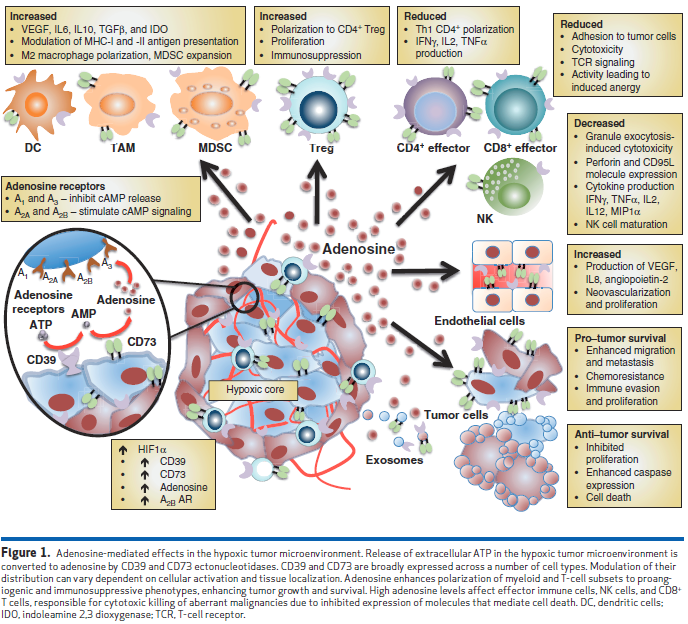 As can be seen in Figure 1, adenosine signaling has a pivotal and central role in the TME, stimulating virtually all pro-tumorigenic heterotypic cellular interactions:

Essentially, adenosine disables cytotoxic effector functions of both NK and CD8 + T cells predominantly via A2A adenosine receptor signaling, enabling tumor immune evasion and escape. Furthermore, signal transduction through the A2A adenosine receptor inhibits the Th1 CD4+ T-cell response, limiting the cytokine environment necessary to support these effector cell types. Adenosine polarizes myeloid cells to develop into immunosuppressive phenotypes such as M2 macrophages and tolerogenic dendritic cells (DC) due to A 2A and A 2B adenosine receptor signaling, respectively. In addition, adenosine enhances proliferation of Tregs and granulocytic MDSCs (myeloid-derived suppressor cells) , which further affect T effector cell proliferation and function. Release of cytokines and immune modulatory factors, such as VEGF, IL6, IL10, and TGFβ, by these suppressive cell types enhances tumor survival via heightened angiogenesis and inhibited immunosurveillance, and thus the majority of evidence suggests that adenosine is favorable to tumor survival. 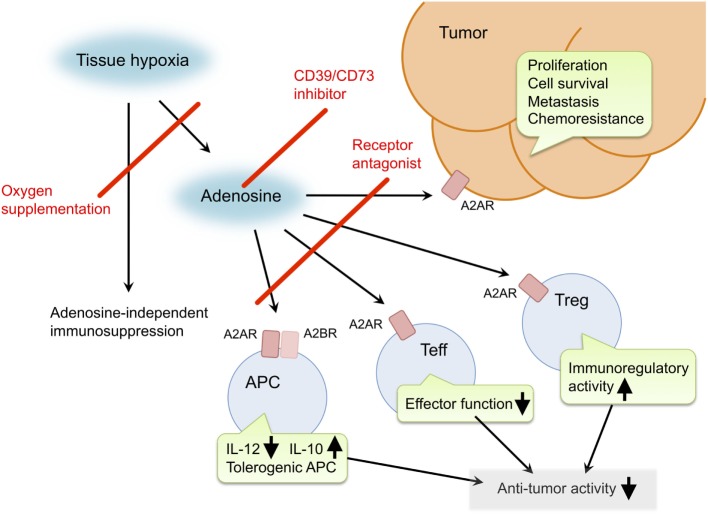 Adenosine is expressed at higher levels in RCC and NSCLC, versus other tumors, including bladder, colorectal, triple negative breast, and prostate cancers, as well as melanoma (see Figure 4). Additionally, atezolizumab leads to increased levels of adenosine in the TME. In Phase 1b trials of CPI-444, clinical activity (partial responses and stable disease) has been seen in single agent and in combination with atezolizumab in RCC and NSCLC. Phase 2 studies are enrolling in RCC (50 patients, single arm, combination with atezolizumab in patients who have failed prior treatment with a tyrosine kinase inhibitor and anti-PD-(L)1 therapy) and NSCLC (MORPHEUS trial – 60 patients, randomized trial of CPI-444 + atezolizumab versus docetaxol in patients who have failed prior treatment with a platinum agent and anti-PD-(L)1 therapy). 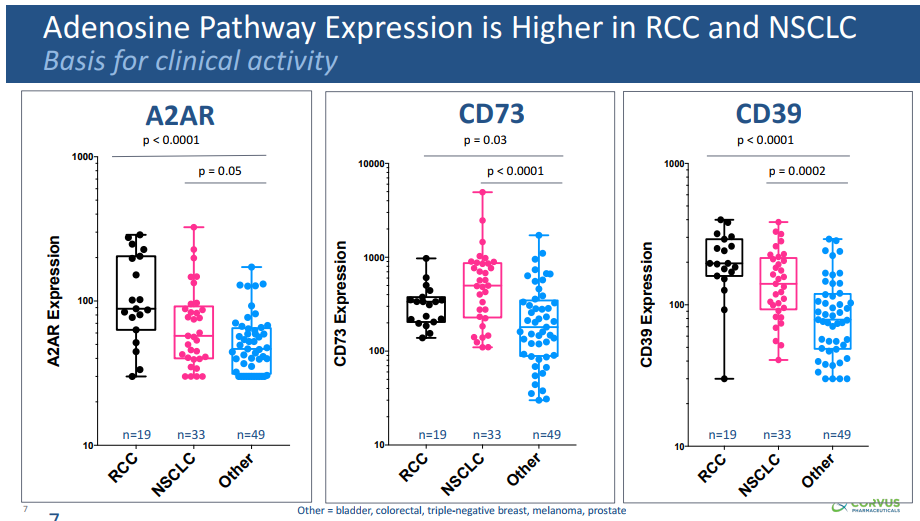 CPI-006 is a monoclonal antibody that binds to the active site that catalyzes AMP to adenosine and inhibits the enzymatic activity of CD73 without receptor internalization (see Figure 5). Other anti-CD73 antibodies in development bind to the ligand-binding domains of the receptor. [Apart from its enzymatic activity, CD73 functions as a co-stimulatory molecule in human T-cells for both proliferation and activation, and also appears to modulate lymphocyte adhesion. Therefore, blocking CD73 signaling may not be desirable.] CPI-006 is being studied alone and in combination with CPI-444 and pembrolizumab (Keytruda, anti-PD1 monoclonal antibody). 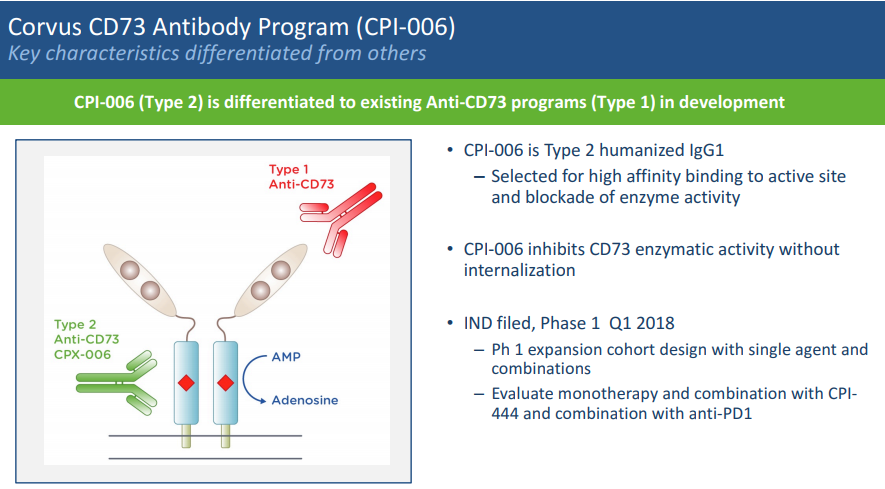 Arcus Biosciences is developing an oral A2A and A2B dual receptor antagonist (AB928), as well as an IV small molecule CD73 inhibitor (AB680). AB928 is in the midst of its first Ph 1 trial.