PD-1 inhibition (Figure 1) has quickly become a front-line therapy for non-small cell lung cancer and melanoma. Moreover, PD-1 and PD-L1 inhibitors are being tested in combination with other checkpoint inhibitors, targeted therapies, cancer vaccines, monoclonal antibodies, and other modalities. But, how does PD-1 blunt the anti-tumor immune response?

PD-1 blocks cell cycle progression in the G1 phase. PD-1 suppressed the transcription of SKP2, the substrate recognition component of the SCFSkp2 ubiquitin ligase that leads p27kip1 to degradation and resulted in accumulation of p27kip1 (Figure 2). Subsequently, T cells receiving PD-1 signals displayed impaired Cdk2 activation and failed to phosphorylate two critical Cdk2 substrates, the retinoblastoma gene product (Rb) and the TGFβ-specific transcription factor Smad3, leading to suppression of E2F target genes but enhanced Smad3 transactivation (Figure 3). These events resulted in upregulation of the Cdk4/6 inhibitor p15INK4B and repression of the Cdk-activating phosphatase Cdc25A. The suppressive effect of PD-1 on Skp2 expression was mediated by inhibition of both PI3K/Akt and Ras/MEK/Erk pathways and was only partially reversed by IL-2, which restored activation of MEK/Erk but not Akt. Thus, PD-1 targets Ras and PI3K/Akt signaling to inhibit transcription of Skp2 and to activate Smad3 as an integral component of a pathway that regulates blockade of cell cycle progression in T lymphocytes.

p27 is a cyclin dependent kinase inhibitor that blocks the activity of Cyclin E-CDK2, which  phosphorylates pRb, thereby ushering the cell from G1 into S phase through the Restriction point (Figure 2). It also blocks Cyclin A-CDK2 from further phosphorylating pRb to maintain S phase. Accumulation of p27 in the nucleus, therefore, blocks cell cycle progression of T-lymphocytes that are being induced to act against cancer antigens. PD-1 expression by cancer cells blocks the proliferation of T-cells.

P15INK4 is a cyclin dependent kinase inhibitor that blocks the activity of Cyclind-CDK4,6, inhibiting it from hypophosphorylating Rb, thereby, rendering the cell cycle unresponsive to external proliferation signals.

Figure 2. Orderly progression through the cell cycle involves passage through sequential checkpoints. Full holoenzyme activity of the cyclin D1-Cdk4 complex is induced by mitogen recruitment of CAK. The cyclin D1-Cdk4 complex phosphorylates the pRB protein leading to sequential phosphorylation by cyclin E-Cdk2 and release of free E2F. The phosphorylation of pRB, and relief of transcriptional repression by pRB induces genes involved in the induction of S-phase entry. https://www.bioscience.org/2000/v5/af/A562/fulltext.htm

What does Smad3 do?

The SMAD proteins are a family of transcription factors consisting of 8 members, SMAD1-8, which are further subdivided into 3 classes based on structural and functional properties. Receptor-regulated SMADs (R-SMADs), SMAD1, 2, 3, 5, and 8, are the only SMADs directly phosphorylated and activated by the kinase domain of type I receptors. Upon phosphorylation, R-SMADs form a complex with the common SMAD, SMAD4, resulting in nuclear accumulation of activated complexes. In the nucleus, R-SMAD–SMAD4 complexes cooperate with transcriptional coregulators that further define target gene recognition and transcriptional regulation. The inhibitory SMADs, SMAD6 and SMAD7, constitute the third class, which function to inhibit TGF-β signaling (Figure 3). 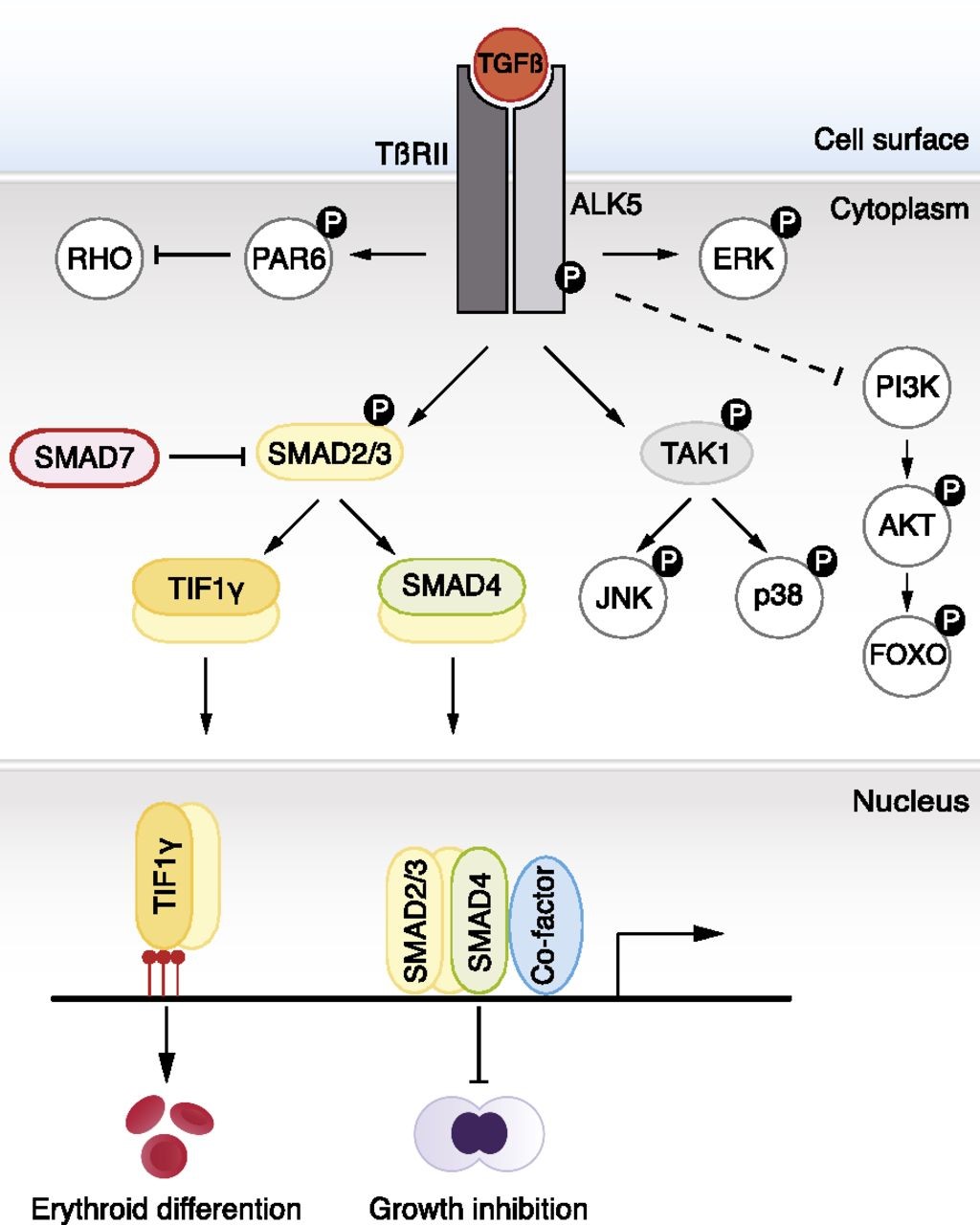 Figure 3. TGF-β ligands bind type I and type II receptors at the cell surface. Subsequently, the type I receptor (ALK5) becomes phosphorylated by the type II receptor. This leads to phosphorylation of SMAD2 and SMAD3, which form a complex with SMAD4. Activated complexes accumulate in the nucleus where they cooperate with DNA-binding cofactors to regulate target gene transcription. SMAD2 and SMAD3 also bind to TIF1γ. In embryonic stem cells, SMAD2/3-TIF1γ recognizes specific chromatin marks, promoting access of SMAD2/3-SMAD4 to otherwise repressed targets. TIF1-γ–SMAD2/3 promotes erythroid differentiation whereas SMAD4-SMAD2/SMAD3 complexes inhibit proliferation. In certain cell types, JNK and p38 are phosphorylated by TAK1 and constitute, together with the PI3K-AKT-FOXO axis, ERK, and PAR6, so-called noncanonical signaling responses to TGF-β. The dashed line indicates unclear molecular mechanism. http://www.bloodjournal.org/content/125/23/3542?sso-checked=true

Since T-cells deficient in SMAD3 are resistant to growth inhibition by TGF-b (Figure 4). It follows that transactivation of SMAD3 induced by PD-1 blocks proliferation of T-cells, thereby abrogating the anti-cancer immune response. 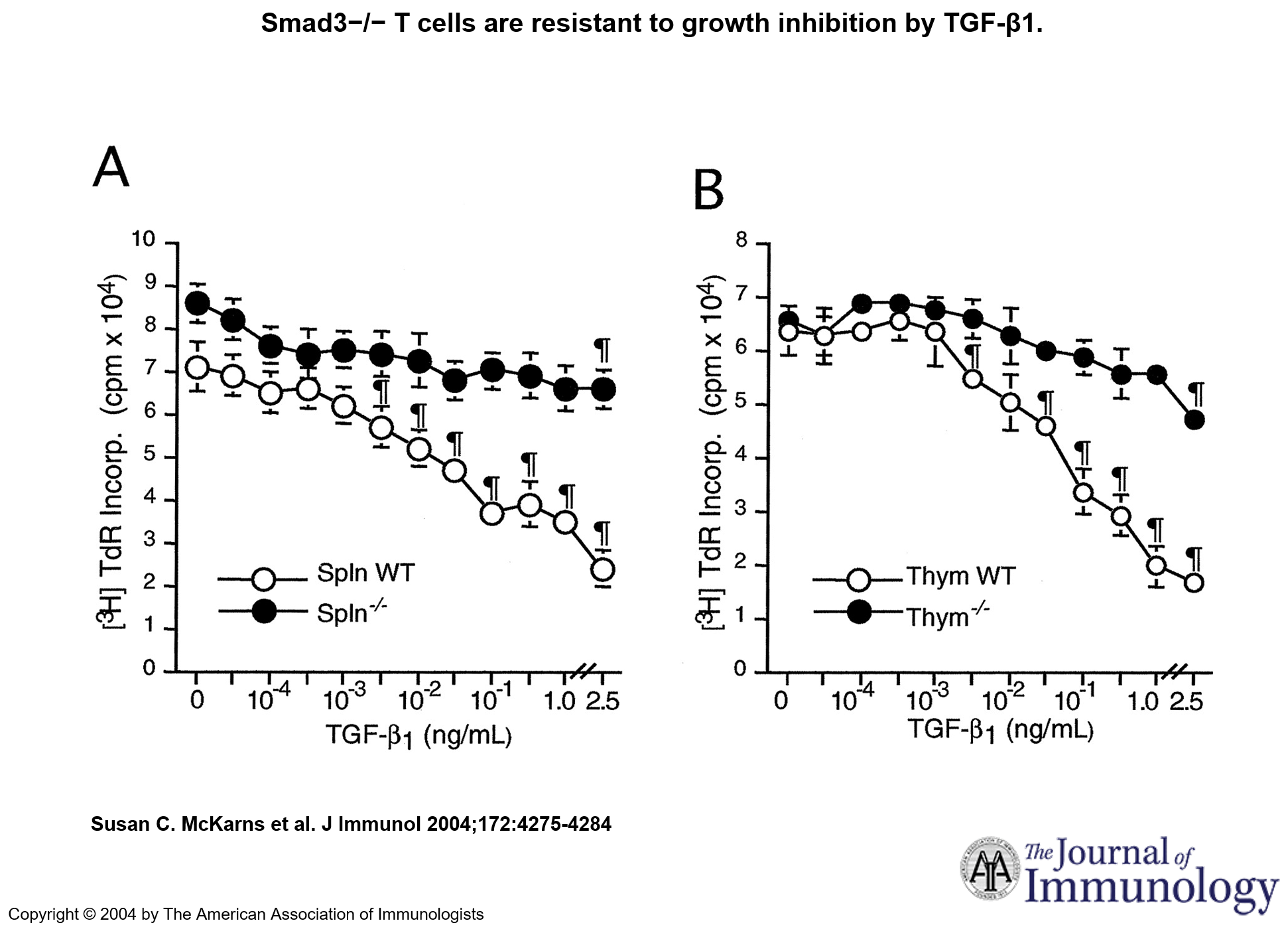 Figure 4. Smad3−/− T cells are resistant to growth inhibition by TGF-β1. Whole splenocytes (A) or thymocytes (B) from WT or Smad3−/− mice were stimulated with anti-CD3 plus anti-CD28 in the presence or absence of TGF-β1 for 72 h, and [3H]TdR was added during the last 18 h of culture. The data are expressed as the mean [3H]TdR incorporation ± SE of three separate experiments for quadruplicate cultures. ¶, Different from vehicle (0 point) at p < 0.05. http://www.jimmunol.org/content/172/7/4275.full

What is SKP2 and how is it related to PI3K/Akt and Ras/MEK/Erk?

SKP2 encodes a member of the F-box protein family which is characterized by an approximately 40 amino acid motif, the F-box. The F-box proteins constitute one of the four subunits of ubiquitin protein ligase complex called SCFs (SKP1-cullin-F-box), which function in phosphorylation-dependent ubiquitination. This protein is an essential element of the cyclin A-CDK2 S-phase kinase. It specifically recognizes phosphorylated cyclin-dependent kinase inhibitor 1B (CDKN1B, also referred to as p27 or KIP1) predominantly in S phase and interacts with S-phase kinase-associated protein 1 (SKP1 or p19). In addition, this gene is established as a protooncogene causally involved in the pathogenesis of lymphomas.

PD-1 does so by blocking PI3K/Akt and Ras/MEK/Erk, pathways that induce SKP2 (Figure 5). Akt controls Skp2 stability and the subcellular localization of Skp2. First of all, the positive correlation between Skp2 expression and Akt activity was found in a panel of breast cancer cell lines. Moreover, inhibition of Akt1 activity in breast cancer cells caused down-regulation of Skp2 expression, indicating that elevated Akt activity could be one major cause of the observed up-regulation of Skp2 in breast cancer. Cooperation between ERK and Skp2 has also been found in human breast cancer whereby synergistic activity of the two oncogenes has been shown to increase p27 degradation. 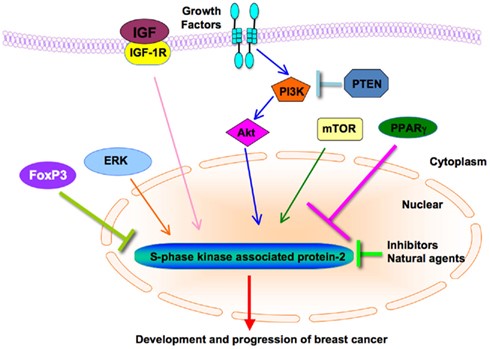