Opdivo, a monoclonal antibody, works by binding to PD-1 expressed on T-cells, thereby inhibiting its interaction with PD-L1, which is expressed on cancer cells. Blocking this interaction protects cytotoxic T-cells from dying, allowing them to attack the cancer (Figure 1). 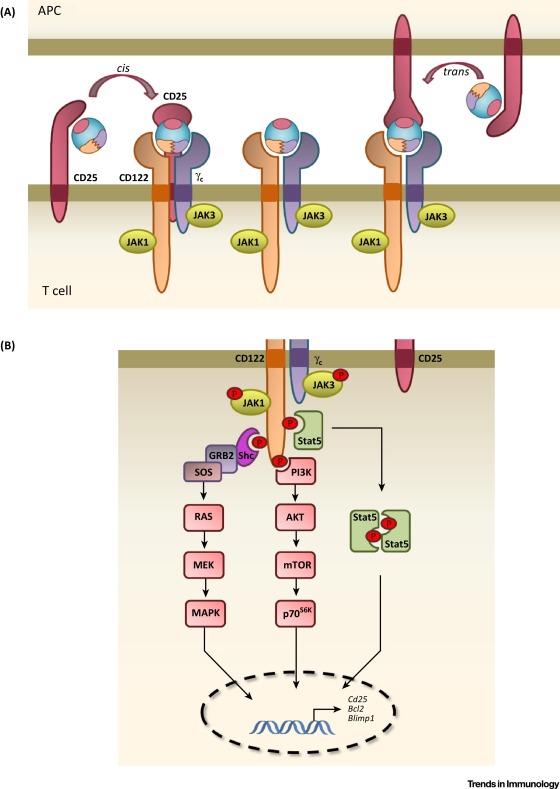 Figure 2. IL-2 Receptor (IL-2R) Binding and Signaling. Cartoon of IL-2 interacting with its receptor subunits, including IL-2Rα (CD25), IL-2Rβ (CD122), and the common γ-chain (γc, CD132), as well as signaling pathways following the interaction of IL-2 with various IL-2R subunits. Binding of IL-2 to CD122 and γc causes heterodimerization of the cytoplasmic tails of these receptor subunits and activation of Janus kinase 1 (JAK1) and JAK3 (associated with CD122 and γc, respectively) [18]. Activated JAK1 and JAK3 exert kinase activity on key tyrosine (Y) residues of CD122, which subsequently allows recruitment of the adaptor protein SHC and of STAT1, STAT3, and STAT5 (including STAT5A and STAT5B). Phosphorylated STAT5A and STAT5B then oligomerize forming STAT5 dimers and tetramers before undergoing nuclear translocation, where they bind to key target genes responsible for cell activation, differentiation, and proliferation. SHC in turn serves as a platform for activating the Ras–Raf–MEK–ERK mitogen-activated protein kinase (MAPK) pathway. Additionally, IL-2R triggering activates the phosphoinositide 3-kinase (PI3K)–AKT–mammalian target of rapamycin (mTOR)–p70 S6 kinase pathway. http://www.cell.com/trends/immunology/fulltext/S1471-4906(15)00248-3

What is IL-2 and why is it important? 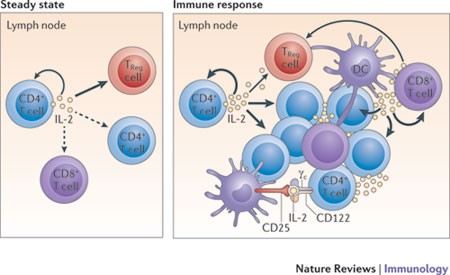 Figure 5. A, schematic of the inactive NKTR-214 prodrug releasing to IL2 conjugates bound by fewer PEG chains with increasing bioactivity. Red depicts the IL2 cytokine core, and orange depicts the polymer chains located at the IL2/IL2Rα interface. B, identification of the most active IL2 conjugates created by hydrolysis of NKTR-214 as measured by phosphorylation of STAT5 in murine CTLL-2 T cells. Purified forms of the released conjugated IL2 forms were assayed. On the basis of the EC50, the 2-PEG-IL2 and 1-PEG-IL2 derived from NKTR-214 are identified as the most active conjugates released from NKTR-214. EC50 values for STAT5 phosphorylation were determined from two or more independent experiments, each performed in triplicate. The IL2 control is a purified reference standard. http://clincancerres.aacrjournals.org/content/22/3/680

In preclinical studies, NKTR-214 demonstrated a mean ratio of 450:1 within the tumor micro-environment of CD8-positive effector T cells, which promote tumor destruction, compared with CD4-positive regulatory T cells, which are a type of cell that can suppress tumor-killing T cells.2 Furthermore, a single dose of NKTR-214 resulted in a 500-fold AUC exposure within the tumor compared with an equivalent dose of the existing IL-2 therapy, enabling, an antibody-like dosing regimen for a cytokine. In dosing studies in non-human primates, there was no evidence of severe side effects such as low blood pressure or vascular leak syndrome with NKTR-214 at predicted clinical therapeutic doses.

A Phase 1/2 Dose Escalation and Expansion Study Of NKTR-214 In Subjects With Locally Advanced Or Metastatic Solid Tumors (NKTR-214) is currently recruiting patients.

In addition to this, Nektar Therapeutics has entered into a Phase 1/2 clinical research collaboration with The University of Texas MD Anderson Cancer Center to evaluate NKTR-214 in a variety of tumor types as a monotherapy and in combination with checkpoint inhibitors such as anti-PD-1 (Opdivo, nivolumab) and anti-CTLA-4 (Yervoy, iplilimumab).

Rationale for combining nivolumab and NKTR-214

There is sound rationale for combining NKTR-214 and checkpoint inhibitors – the former has the potential of accelerating the CD8+ specific immune response against the tumor (without stimulating Treg cells, which suppress CD8+ cells) and the latter can prevent abrogation of the immune response, enabling stronger immune attack for a longer period. That, of course, is the hope.