Semaphorins are secreted, transmembrane, and glycosylphosphatidylinisotol-anchored glycoproteins that are important in cell to cell signaling. Humans have 20 semaphorins, the most of any species analyzed to date. Their role was originally identified in the development of the nervous system and axonal guidance. Since then, they have been shown to be important in the development and functioning of many tissues including:

cardiovascular, endocrine, gastrointestinal, hepatic, immune, musculoskeletal, renal, reproductive, and respiratory systems. A common theme in the mechanisms of semaphorin function is that they alter the cytoskeleton and the organization of actin filaments and the microtubule network. These effects occur primarily through binding of semaphorins to their receptors, although transmembrane semaphorins also serve as receptors themselves.

Where are SEMA4D receptors expressed, and what do they mediate? 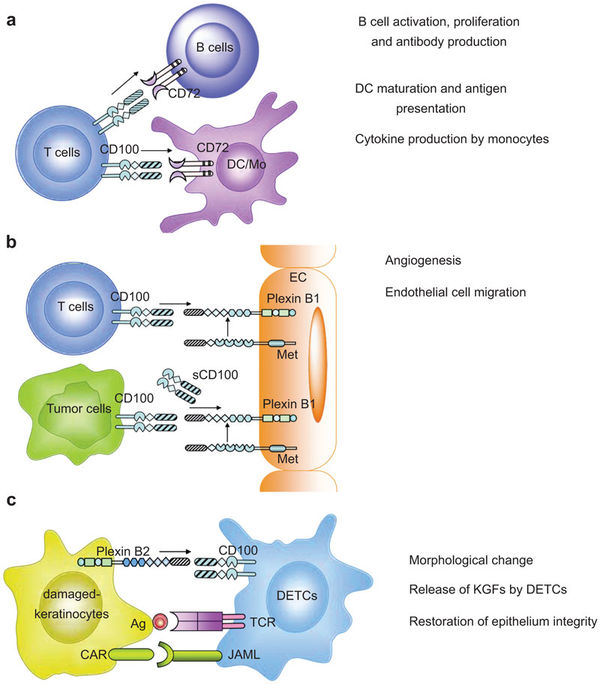 Figure 1. Multiple functions mediated by Sema 4D/CD100-plexin B counter-receptors. (a) As a ligand, the ligation of Sema 4D/CD100 with the low-affinity receptor CD72 stimulates the activation of, proliferation of and antibody production by B cells, promotes the maturation of and antigen presentation by dendritic cells (DCs), and induces the production of cytokines (IL-12, TNF-α, IL-6 and IL-8) by monocytes (Mo). (b) The binding of Sema 4D/CD100 molecules, which can be in both membrane-bound form (expressed on T cells or tumor cells) and soluble form (sCD100) (shed from activated T cells or tumor cells), to the high-affinity receptor plexin B1, which is expressed on endothelial and epithelial cells, induces angiogenesis and endothelial cell migration. (c) Damaged keratinocytes produce a self-antigen, plexin B2, and cocksackie adenovirus receptor (CAR), which can be recognized by the γδ T-cell receptor (TCR), Sema 4D/CD100, and the junctional adhesion molecule-like molecule (JAML), respectively, of dendritic epidermal γδ T cells (DETCs). These morphologically rounded DETCs release keratinocyte growth factor type 1 (KGF1) and KGF2, which may induce the proliferation and migration of keratinocytes and the restoration of epithelial integrity. https://www.nature.com/articles/cmi201265

Why is SEMA4D a good target for immuno-oncology?

SEMA4D is broadly expressed in many cancers and correlates with invasiveness. It is found at the leading edge of invasive cancers and functions to block T-cells from penetrating into the tumor microenvironment. Antibodies to SEMA4D have been shown to permit penetration of tumors by T-cells, reduce Tregs, induce the release of TNFα and IFNg, and induce a pro-inflammatory (as opposed to immune-suppressive) environment. Given these effects, combination therapy with checkpoint inhibitors, chemotherapy, angiogenesis inhibitors, and radiation is rational. 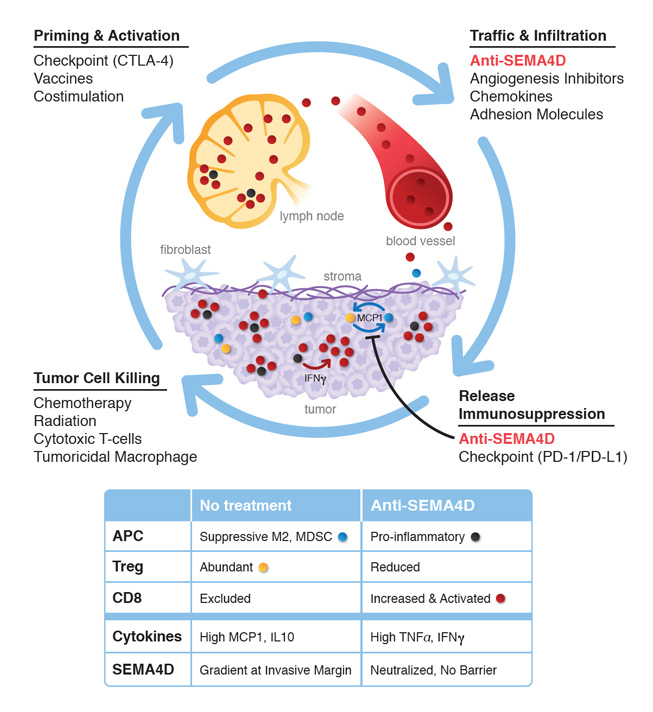 A Phase 1b/2 study of VX15/2503 combined with avelumab (Bavencio, anti-PDL1) in patients with non-small cell lung cancer (NSCLC) is currently underway:

This is a phase 1b/2 study, designed to evaluate the safety, tolerability, and efficacy of VX15/2503 in combination with avelumab in immunotherapy-naïve subjects diagnosed with advanced (stage IIIB/IV) NSCLC who have either progressed on cytotoxic chemotherapy or declined first-line treatment with cytotoxic chemotherapy. The primary objective (Dose Escalation Phase) is to evaluate the safety and tolerability of ascending doses of VX15/2503 Q2W in combination with avelumab 10mg/kg Q2W. The second primary objective (Dose Expansion Phase) is to evaluate safety and tolerability of the recommended phase 2 dose of VX15/2503 administered in combination with 10 mg/kg avelumab Q2W. The secondary objectives include (Dose Expansion Phase), a preliminary estimate of efficacy using the following in accordance with Response Evaluation Criteria in Solid Tumors (RECIST) 1.1, Objective Response (OR), Duration of Response (DoR) and Progression-Free Survival (PFS), as well as making a preliminary estimate of efficacy using the following in accordance with iRECIST, OR, DoR and PFS. Additional secondary objectives are to characterize the pharmacokinetics profile of VX15/2503 and avelumab administered Q2W in combination, evaluate the immunogenicity of VX15/2503 and avelumab administered Q2W and evaluate VX15/2503 and avelumab pharmacodynamics markers including but not limited to receptor occupancy. Exploratory objectives include identification of candidate biomarkers of activity and biomarkers that may predict response to treatment with combination therapy of VX15/2503 and avelumab.

Enrollment will involve approximately 40 individuals who are 18 years of age or older with advanced non-small cell lung cancer. The study will be divided into two phases, dose escalation with up to 18 patients and dose expansion with up to 28 subjects. Subjects that are enrolled in the dose escalation phase may continue into the dose expansion phase, as long as there is no evidence of disease progression. The subjects entering the dose expansion phase from dose escalation, may have their dose increased to the recommend phase 2 dose, once it is determined. Any subjects that have evidence of disease progression will be taken off of treatment and will have a post treatment safety follow-up visit 10 weeks after last treatment. Subjects that have discontinued study drug will also continue to be followed every 3 months for survival, or lost to follow-up. It is estimated that the study will take approximately 33 months between first subject enrolled and last subject visit.