Two Years of College vs One?
41% Favor Raising the Age Limit for NBA Eligibility;

South Orange, NJ, March 23, 2017 — A clear majority of the American public believes that television revenue generated by the NCAA Basketball Tournament has turned collegiate athletics into too big a business, detracting from a university’s academic goals.

Fifty-three percent (53%) responded “yes” to that question in a Seton Hall Sports Poll conducted this week among 739 adults across the country.  Thirty-five percent (35%) responded “no.”  The poll has a +/- 3.7% margin of error and is conducted with both landline and cellphone users.  The poll is sponsored by The Sharkey Institute.

When asked, however, how much importance universities place on graduating basketball players – 58% said they believed the schools placed either a high or medium importance on graduation.  This is about even (59%) from a similar Seton Hall Sports Poll taken five years ago. 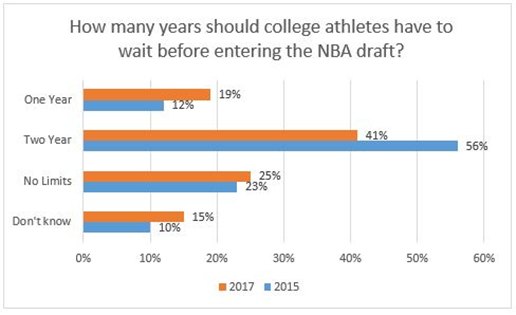 Both the NBA Commissioner and the president of the NCAA have suggested raising the minimum age for eligibility in the NBA draft from 19 to 20.  That essentially raises the commitment to college basketball from one year to two years.  19% thought it should remain at one year, but 41% favored two years.  26% said there should be no limits.  When asked this question two years ago, 12% favored one year, and 56% two years with 23% saying no limits.

63% felt requiring an extra year of eligibility in college was a good thing, even if it meant losing a year of professional salary.  26% said no to the extra year requirement.  When asked this question in 2014, 73% favored staying in school, a significant drop.

NUMBER WHO SAY ‘SCHOLARSHIP IS SUFFICIENT’ IS TRENDING DOWN

45% of the nation felt student/athletes should not share in TV revenue or receive a salary for participating, with 40% saying they are exploited by not sharing in the revenue and should receive compensation.   Men are more likely than women to believe that the students are being exploited, and people 18-44 are much more likely to believe that the students are exploited than those over 45.

“The public seems to be more sympathetic to increasing fees to student/athletes above scholarship,” noted Rick Gentile, Director of the Poll.  “This is in sync with major conferences beginning to offer additional ‘cost of attendance’ aid to student/athletes.”

On the matter of whether people fill out a set of brackets or participate in a poll over this year’s tournament, 13% said they did.  35% of the nation says they follow the tournament either closely or very closely.

46% of respondents felt that most (or all) colleges break the rules in recruiting athletes, the same number as when the question was asked in 2013.

A podcast in which Seth Everett interviews Rick Gentile can be downloaded at https://t.co/iRcZH6RBTQ

This poll was conducted by telephone March 20-22 among 739 adults in the United States. The Seton Hall Sports Poll is conducted by the Sharkey Institute.

not closely or not at all?