South Orange, NJ, February 23, 2017 – If younger people are to set the trend for the future of legalized gambling in America, they are certainly showing support for the concept today.

Asked by the Seton Hall Sports Poll this week, “It’s been said a lot of people bet on sporting events anyway, so government should allow it and tax it. It’s also been said legal betting on sporting events is a bad idea because it promotes too much gambling and damages the integrity of sports. Which comes closer to your view?”…….

…….46% of Americans stated support for allowing betting on sporting events, while 42% said it was bad idea. This is a substantial increase from 2010 when a Fairleigh Dickinson poll showed 39% of Americans supported it, with 54% saying it was a bad idea.

The poll was conducted February 20-22 among 626 adults across the country on both landlines and cellphones, with a margin of error of 4.0 %.

“If younger people carry those beliefs forward, and as they become lawmakers themselves, we could see a major shift in the legality of sports gambling,” noted Rick Gentile, director of the poll, which is sponsored by The Sharkey Institute.

The age trend also was also demonstrable on a question of whether it was appropriate for NBA Commissioner Adam Silver’s to call for legalized betting on a strictly regulated basis: 56% of those 18-29 supported his stance as appropriate, 34% of those 30-44, 28% of those 45-59 and 21% of those 60+ supported the stance. 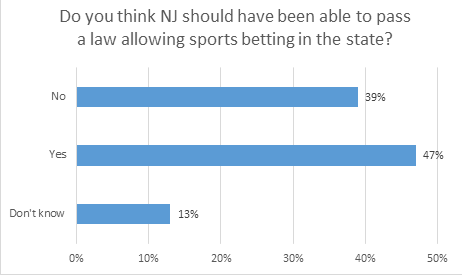 Daily fantasy games, a recent entry into the sports gambling discussion, attracts young people far more than older ones. While nationwide, only 15% say that have participated, the number is 24% for those 18-29, 11% for those 45-59, and only 6% for those 60+. 61% of all respondents believe those daily fantasy games are a form of gambling, with 23% calling them a game of skill. 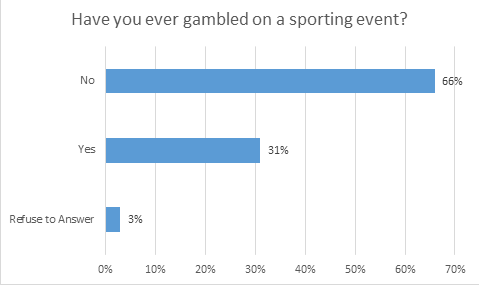 A podcast in which Seth Everett interviews Rick Gentile will be available shortly.

This poll was conducted by telephone February 20-22 among 626 adults in the United States. The Seton Hall Sports Poll is conducted by the Sharkey Institute.

The law should be left as it is 18

The law should be changed to allow all states to legalize sports betting if   they choose to do so. 45

(IF NO TO PREVIOUS QUESTION)