Throughout its storied history, the hues of “White and Blue” have always been synonymous with Seton Hall.  These colors were adopted during the nineteenth century and likely inspired by Bishop James Roosevelt Bayley whose family crest features a series of white stars affixed to a cobalt field.  Additionally, Blue is associated with the Blessed Virgin Mary, one of the early patronesses of the school and associated with finding truth while White is the symbol of purity, light, and saints who were not martyred (although Elizabeth Ann Seton was not canonized until 1975, she did not achieve martyrdom)

When it came to seminal nicknames at Seton Hall during the years prior to the celebration of its Diamond Jubilee, intercollegiate squads used the sobriquet – “White and Blue” as an all-purpose attribution.  Additional adjectives included “The Villagers,” “Alerts,” and the “Quick Step Nine” (for Baseball Nines) have also been documented in print through Setonia-produced imprints (including the title of the School Annual or Yearbook from 1924-42) and external media sources alike.  This legacy still lives on in the popular refrain – “Fight, Fight, Fight for the Blue and White . . . Onward to Victory!”  Presumably this “mascot” and choice of talisman would have continued further, had it not been for one fateful day on a New England Baseball Field nine decades ago

The Pirates are Born

Within the aftermath of the Seton Hall-Holy Cross Baseball Game held on April 24, 1931 in Worcester, Massachusetts, the visiting team from New Jersey somewhat miraculously came from behind after experiencing a five-run deficit through the stringing together a combination of walks, hits, and errors that helped the “White & Blue” Nine emerge victorious by a final score of 11-10. This outcome prompted a Newark News sportswriter to exclaim, “That Seton Hall team is a gang of Pirates! . . . ,” which applied to the aggressive play and the squad stealing a victory (or a “treasured” result if you will) from the Crusader Nine. Upon hearing of this post-game proclamation within their locker room, the Seton Hall squad decided that their newfound name was both fitting and fashionable, and they would return to South Orange and be known as the Pirates thereafter.

It has been oft-wondered why the writer used the term “Pirates” instead of something else?  Upon reflection this makes sense as the noun “Pirate” has been defined according to the Cambridge University Dictionary as one who: “. . . sails on the sea and attacks and steals from other ships.”  Combine the formal definition taken from a journalist with the prevalence of Pirate imagery in popular culture including the long-standing renown of such novels as: The Pirate, by Sir Walter Scott (1821); “Long John Silver” a major figure in Treasure Island by Robert Louis Stevenson (1883); “Captain Hook” from Neverland, one of the main protagonists from the book – Peter Pan, by J.M. Barrie (1904). Book covers/jackets, early cinema, and literary descriptions set the image of English launched a “Jolly Roger” Pirate model (with large, plumed hat featuring a decorative “Skull and Cross Bones” motif, eye patch, peg leg, hook hand, etc.) who sailed the Caribbean during the eighteenth-mid-nineteenth century seas.

In 1931, the book entitled: Yankee Ships in Pirate Waters by Rupert Sargent Holland and the daily comic strip, Terry and the Pirates by Milton Caniff helped to reinforce the “swashbuckling” and exciting aspects of Piracy in a fictional sense.  On the sports-front, that same year the Pittsburgh Pirates, a major league club was celebrating a half century of existence and their third decade in the National League.  They were known as frequent visitors to the Newark-area to play such local teams as the Brooklyn Dodgers and New York Giants in regular series during that era. Thus, “Pirates” already had a wider appeal throughout popular society and the sports world alike.

The first edition of The Setonian (Student Newspaper) after the Holy Cross contest resulted in the first public pronouncement of this new nickname adoption. The Reverend Thomas J. Gilhooly (then a student in 1931) wrote a poetic verse in tribute of this new and figurative era in Seton Hall Athletics History . . .

“THE PIRATES – Our teams are known as Pirates, / In the world where sport holds sway; / And like their honored forbears, / Nothing stands in their way.  /  On the football field, the Pirates / Fight for every gain; / And though they do not always win, / The enemy earns the game. / In the realm of basketball, / The Pirates stand supreme; For her is their initial charge, / Their booty . . . so it seems. / Then baseball calls them to the helm, / And bold and brave they stand; / Now they justify their name, / They are heroes of the land. / So onward, ye brave Pirates. / On, on to worlds of crowns; / Onward to “runs” and “baskets”, / Onward to many “touchdowns.” / on, onward to greater heights, / In the world where sports holds sway; / And where your honored forbears, / Pridefully bless your day.”

Despite an initially warm and exciting reception, somewhat curiously, the use of the “Pirate” nickname in print did not have wider usage or uniform approval during the remainder of the 1930s and into the 1940s.  Interestingly, the “Pirate” term was used conservatively beforehand especially in print as the “White and Blue” and the unofficial and colloquial – “Setonians,” “South Orangers,” and even “South Orange Lads,” were typically used as an alternative term within some press circles.

Conceivably the violent and illegal nature associated with real-life “Pirates” went against Catholic teaching and moral sensibilities, but for the sake of intercollegiate competition having a fearsome nickname makes a team appear more formidable, but all in the spirit of competitive sportsmanship.  The question of change came in 1936, when sports scribes from The Setonian made their own attempt to create a distinctive nickname for the Seton Hall Five and every other sports team to supersede the “Pirates” for something more benign. They came up with the “Kerryblues” (the “Kerry” is a bluish furry dog noted for its fighting instincts and “Blues” for the school color), but this particular moniker never stuck, and the “Pirates” have endured and by the 1970s had adopted an alternative and rarely used nickname of the “Buccaneers” or “Buccettes” for Women’s sports teams. And would be used conservatively for a few more years.

However, it would not be until the post-World War II-era when the “Pirates” brand came into greater vogue.  This explosion which began in earnest from the early 1950s forward was fueled by the success of each Seton Hall Athletic squad to compete over the last half century plus whether it be on the Basketball or Volleyball Court, Baseball Diamond, Soccer Field, Running Track, Golf Course, or any other venue where Seton Hall squads have competed. Additionally, there is no aspect of school life that has been left untouched by some aspect of a “Pirate” allegory.  Whether it be figurative or visual, the proliferation of Pirate references by word, print, and in logo form that is associated with Setonia has not only become regionally recognized, but nationally as well. This has also coincided with the wide-spread growth of sports marketing along with a receptive and passionate student body, alumni, and wide-spread fan base that choose to identify as Pirate Fans. 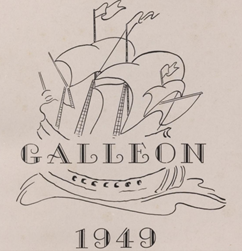 Documentation shows that not only athletic teams really ran with the nickname (and the Seton Hall Prep School by extension adopted the nickname as well) The student body also began to incorporate popular Pirate-centered imagery into their activities. As noted above, the renaming of the Student Annual (Yearbook) first known as the “White and Blue” was later changed to “The Galleon” (for one year in 1940) and for good from 1947-2006 when it ceased publication . . .

As archival documentation shows, other examples go beyond Athletic Team representation alone to exhibit how the administration and all parts of the University adopted the nickname to coincide with various project designations and publication titles including the aforementioned Galleon (a term for a Pirate Ship), there are others like “Pirate Plank” (as in “Walking The . . . “ as a form of punishment, “Pirate Treasure” (the typical objective that Pirates sought), in other words from 1931 to the present-day, all aspects of University life have been touched by some degree of “Pirate” identification in some way either by exposure, extension, usage, naming opportunities, cheering, school spirit, along with other applications or allegories.

Seton Hall University looks to navigate forward with the “Pirate” as its mascot now and well past its ninetieth anniversary.  Many more “ahoys” will be heard on campus and beyond when it comes to praising Seton Hall in the following traditional manner . . . “Go Pirates!”

For more information on Seton Hall traditions and other aspects of school history please contact the University Archives by e-mail: archives@shu.edu or by phone at: (973) 275-2378.