National Anthem Protest is a ‘Turn Off’ for NFL Fans, Cited as the Leading Cause for Viewership Falloff

South Orange, NJ, November 21, 2016 – In a year of declining television viewership for NFL games, 23% of Americans say they are watching fewer games, and a quarter of them attribute it to the protests during the playing of the national anthem.

Of those watching fewer games, the fall off was attributed to:

Protests during the national anthem   25%

Too many commercial interruptions    10%

“The anthem protest still seems to resonate most loudly but there clearly are a number of issues negatively affecting viewership,” said Rick Gentile, director of the poll, which is sponsored by The Sharkey Institute.  “We saw last week that the best remedy is great match ups and great games”

As for San Francisco quarterback Colin Kaepernick, who began the protests, 50% disapprove of his not choosing to vote in this month’s election, with only 14% approving. Among African-Americans, only 30% voiced disapproval, compared to 58% of white respondents. 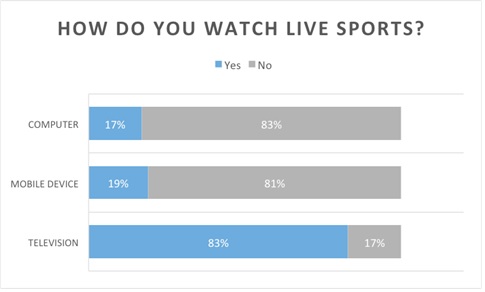 The poll also tracked viewing habits of fans – of all sports – and found that 22% watched less live sports on TV than in the past; 13% are watching more, and 60% about the same.

(IF “FEWER” ASK THE FOLLOWING QUESTION. IF MORE OR SAME SKIP NEXT