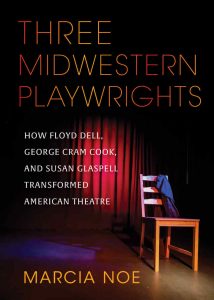 Marcia Noe’s impressive career as a Glaspell scholar began in 1983 with her publication of the first modern biography of Susan Glaspell, Susan Glaspell: Voice from the Heartland (Western Illinois University Press). Over the intervening years Noe contributed many feminist and formalist analyses of Glaspell’s plays, often illuminating their context in Midwestern culture. This body of work is now crowned with her publication of Three Midwestern Playwrights: How Floyd Dell, George Cram Cook, and Susan Glaspell Transformed American Theatre, which tells a part of the Provincetown story that has not yet been told.

In this book Noe argues that the progressive social, political, and cultural activities in which Floyd Dell, George Cram Cook, and Susan Glaspell were involved in early twentieth-century Davenport, Iowa, informed not only the plays that they wrote but also the aesthetic and theatre practice of the Provincetown Players (1915-1922), the theatre company that contributed significantly to the foundation of modern American drama. The philosophical and political orientations of Dell, Cook, and Glaspell, fostered in their Midwestern hometown, helped to create a theatre practice marked by experimentalism, collaboration, leftist cultural critique, rebellion, liberation, and community engagement.

This book situates the origin of the Provincetown aesthetic in Davenport, Iowa, a Mississippi River town in which a large German population provided a particularly fertile cultural environment, including a Socialist local in which Dell and Cook were active. In addition to their political activities, Noe establishes that Dell’s work as reporter and editor for The Tri-City Workers Magazine, Dell’s and Cook’s leadership in the Monist Society, and Cook and Glaspell’s role in the Davenport censorship controversy were reflected in the plays that they wrote for the Provincetown Players. She discusses how all three writers were able to see that radical politics sometimes begets radical chic and shows how, consequently, several of their plays satirize the faddish elements of the progressive political, social, and cultural movements in which they were active.

Although the Provincetown Players was located on the East Coast, several of Dell’s, Cook’s, and Glaspell’s plays were set in their native Midwest. Noe’s new book tells the story of how Dell, Cook, and Glaspell effected a marriage between early twentieth-century Midwestern radicalism and East Coast avant-garde theatre practice, a marriage that resulted in a fresh and energetic contribution to American theatre.