A professional concert reading of Trifles was presented on October 4, 2016, at the Metropolitan Playhouse, 220 East 4th St., New York City, organized by AD Alex Roe and ISGS members Sharon Friedman and J. Ellen Gainor, to celebrate the centennial of Trifles.  ISGS members participated in a post-reading discussion at this moving tribute to Glaspell’s most iconic play.

On October 16, 2016, a Modern Drama Seminar on Susan Glaspell and the Provincetown Players was held at Universidad Autónoma de Madrid with keynote speakers Basia Ozieblo, Emeline Jouve and Linda Ben-Zvi. The Seminar included an exhibit at the Humanities Library: “Susan Glaspell, pionera del teatro experimental.” Another special Seminar was held in Toulouse, France on invisible violence in Trifles with keynote by guest of honor Noelia Hernando-Real. The Seminar was organized by Emeline Jouve & Céline Nogueira at Toulouse University (France).

Billed as “two gripping marital mysteries by two playwrights who helped bring modern drama to America,” the Shaw Festival in Niagara-on-the-Lakes, Ontario, presents Glaspell’s Trifles on the same bill as Eugene O’Neill’s A Wife for a Life from May 29 to October 12 at the Court House Theatre as part of their “lunchtime one-acts” program.

Now in its 52nd season, with 10-12 productions each year performed in four theatres for an audience of more than 250,000, the Shaw Festival is a Canadian cultural icon, producing a diverse mix of plays from the past and present, performed by their talented Acting Ensemble. This production is directed by Meg Roe and designed by Camellia Koo, with lighting designed by Louise Guinand and music composed by Alessandro Juliani. It features Kaylee Harwood as Mrs. Peters, Julain Molnar as Mrs. Hale, Benedict Campbell as Mr. Hale, Jeff Irving as the attorney, and Graeme Somerville as Mr. Peters.

Comments from Daina Giesler, a theatre director who saw Trifles and A Wife for Life:
“At the Shaw, the set was the same for both plays (an artistically old, grey, dim cabin, very bare) with only small prop changes. It was in one of the smaller theatres with a 3/4 thrust so the audience could feel like they were inside. The plays worked quite well together — both with characters in isolated areas and with secrets, and because the main focus of both was ‘the wife’ that was spoken of and yet never seen, except by the description of others who seemed not to really know “her”… The actors were excellent and so was the response, but it seemed to me they were both shorter than I remembered them — with only 50 minutes for the two.”

To read more go to shawfest.com or to the Links page on this site and click on Shaw Festival link.

Prof. Cheryl Black directed Trifles and Milbre Burch presented her original monologue directed by Emily A. Rollie, “Sometimes I Sing,” a moving sequel to Trifles, as part of a triple bill including a new adaptation by cfrancis blackchild of Zora Neale Hurston’s “Sweat” entitled “The Devil’s Own” and directed by Laura M. Nelson, all under the umbrella title “Justice Served.” The interdisciplinary symposia at University of Missouri featured visiting scholars Patricia L. Bryan (Chapel Hill), ISGS member and author of Midnight Assassin: Murder in America’s Heartland, and Hurston biographer Valerie Boyd (University of Georgia). The performances were sold out and the postshow discussions, led by Bryan and Boyd, were fabulous! MU faculty from the Law School, School of Journalism, School of Social Work, English and Women’s and Gender Studies Depts. attended and participated in the discussions. The Kennedy Center American College Theatre Festival respondent raved, and the students in the casts felt like they were part of something very special and important. 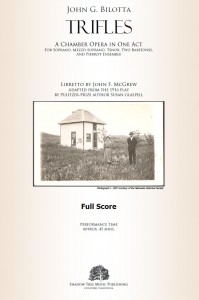 The San Francisco Cabaret Opera presented the WORLD PREMIERE of Trifles, the opera, with music by John G. Bilotta and libretto by John F. McGrew at the 10th Annual Fresh Voices Festival, June 17 & 19, 2010, Live Oak Theater, Berkeley, along with four other operatic and vocal works by American composers presented by Goat Hall Productions, directed by Harriet March Page with a chamber ensemble conducted by Martha Stoddard.

From February 23 to March 24, 2007, The American Century Theater (TACT) of Arlington, Virginia produced two Susan Glaspell works, Trifles and Suppressed Desires, as part of a bill of seven one-act plays written by American women dramatists from around the Prohibition era. The bill of one-acts appears to have been the brainchild of TACT Director Steven Scott Mazzola, who assembled the plays in conjunction with Lillian Hellman biographer Deborah Martinson. . . . Glaspell’s Trifles, the second play on the bill, received a simple, heartfelt rendering by Mazzola and cast. Perhaps the most unusual feature of the staging was the nontraditional casting of Tanera Hutz, a highly effective African-American actress, in the role of Mrs. Peters . . . Critic Jackson termed Trifles “a masterpiece,” and Doug Krentzlin for Examiner.com found the play “by far, the most effective” of those produced. Susan Berlin, writing for TalkingBroadway.com, showed that much work is still needed in resuscitating Glaspell’s reputation by referring to the production of Trifles as an “interesting discovery.” . . . Glaspell and George Cram Cook’s Suppressed Desires rounded out the bill, followed only by a brief coda from Stein’s Photograph. The play was performed with broad gusto by Mary McGowan, William Aitken, and Jennifer B. Robison, and the playfulness of the early twentieth-century satire clearly still resonated, evoking frequent and long laughter throughout. Krentzlin found the play “a hilarious send-up of Freudian psychoanalysis” and the critic for Alexandria’s Del Ray Sun termed it “deliciously sardonic.” Trey Graham of the Washington City Paper offered perhaps the most succinct and memorable response: “Glaspell’s head-shrink play is a riot.” . . . 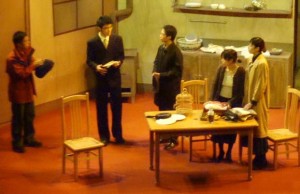 Students at SuZhou University in China performed Trifles in October, 2006, directed by Alexander Moffet from Grinnell University, as part of the 12th National Symposium on American Drama and Theater. SGS member Ling Jian-e presented a paper, “Compulsory Private Space and Redemptive Sisterhood: Dramatic Space in Trifles and ‘night Mother” and Linda Ben-Zvi was the Keynote Speaker at the Symposium.