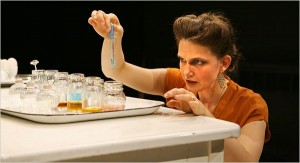 The Verge was produced and directed by Cheryl Black, Associate Professor, Department of Theatre, University of Missouri-Columbia, and performed by MU students at the Corner Playhouse, April 2-5, 2009.