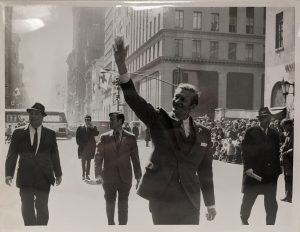 Recently, the Archives received a grant from the New Jersey Historical Commission to organize and describe a large collection of records from Irish immigrant cultural organizations, primarily the Ancient Order of the Hibernians.

These records show how immigrants to the United States organized themselves to help one another. These mutual aid organizations provided an early form of insurance – members would pay a little every month, and if they were injured or got sick or a breadwinner in their family died, the society would pay them a benefit in order to provide financial security. These organizations played a crucial role in supporting working class people before the New Deal provided unemployment insurance on a national scale.

As their original role of financial support receded, these organizations shifted their focus toward celebrating culture and community. The Ancient Order of the Hibernians played a prominent role in organizing the famous St. Patrick’s Day parade in New York.

The John Concannon papers, which project archivist Quinn Christie is processing, also contain planning documents for the parade, invitations to local dignitaries to attend and play roles in the celebration, tickets, musical lineups, and much more. As Christie says, “This collection is full of surprises.  I never know what I’m going to find when we open a box.  In the papers of Concannon, we found the records of James Comerford, who served as President of the AOH and Chairman of the Parade.  In addition to papers from his organizational roles, we found his membership card in the Irish Volunteers (predecessors to the IRA) from 1918.”

The collection will be available to researchers by the end of 2022.