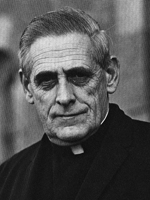 This year marks the 50th anniversary of the inauguration of Monsignor Thomas G. Fahy (1922-76) as the fourteenth president of Seton Hall whose tenure was marked by a major series of initiatives that enhanced the administrative focus, academic infra-structure, and student experience for those connected to the university during his time as chief executive.  His life and example have been fondly remembered by those he touched along with future generations of Setonians who benefited from the forward-thinking initiatives he nurtured and approved between the years of 1970-76 in particular.

A native of Jersey City, Monsignor Fahy graduated from Seton Hall College in 1943 and four years later became an alumnus of the Immaculate Conception Seminary just prior to ordination as a priest for the Archdiocese of Newark. He was later educated at Fordham University where advanced degrees in Theological Studies were earned.  The first educational-based assignments undertaken by Monsignor Fahy came as a Latin and Greek Instructor and Director of Athletics at the Seton Hall Preparatory School before joining the ranks of the university administration in 1955.  Prior to becoming president, Monsignor Fahy served Seton Hall as Athletic Director, Professor of Classical Languages, Dean of Men and Vice President of Instruction.

Upon assuming the presidency, Monsignor Fahy created the Center for Black (later known as African American) Studies was established in 1970. Another key addition to the campus landscape came to the fore when the Puerto Rican Institute was founded four years later. During the time of Monsignor Fahy, Seton Hall became more boarder-oriented when they opened Aquinas Hall, the first residence hall for women in 1971. Within academic circles, the Stillman Business School and Schwartz Nursing College Complex opened in 1973. Governance of Seton Hall originally balanced between a 25-member Board of Regents and 13 trustees, as operational leadership on a daily basis emanated from the office of Monsignor Fahy. In addition, Elizabeth Ann Seton, patroness of the University was canonized in Rome by Pope Paul VI in 1975, making her the first American-born saint. A year later, in response to a great swell in religious-based research, the New Jersey Catholic Historical Records Commission was founded at Seton Hall, where it remains active to this day.  These were just a few of the moves of lasting significance that remain connected to his legacy.

Monsignor Fahy was not only concerned for the welfare of the campus community, but for all citizens of the world  During his inaugural speech in 1970, he made mention of Catholic Higher education and the state of academic life, but also made the following pronouncement in regard to care for the earth and inhabitants based on the means of handling technology and ecology in a responsible manner:

“ . . . for us the most incredibly sophisticated marvels, the automobile and the jet plane to open up the country and the world; an agriculture whose yield is ten-fold what it was at the beginning of this century: a space program so incredible that we now somehow feel deflated that only two of our first three efforts to land on the moon were successful.  But while successive generations of college students were trained to produce these marvels, these students were apparently not warned to relate their achievements to man’s continued existence on earth.  As a result, we now face an ecological crisis of catastrophic proportions.  We could, we are told, be buried in our garbage, be asphyxiated by the exhaust of cards, or poisoned by the effluvia in our waters.”

Beyond the board room, Monsignor Fahy was known as a thoughtful presence on campus who would sit on the steps of Presidents Hall and gladly talk to anyone who happened by about their lives and concerns. This is another side of the man that lives on in memory.  Monsignor Fahy accomplished many important landmarks during his lifetime, but tragically passed away in 1976 at the age of 54.  When the news arrived on campus he was widely mourned and eulogized.

Among the most poignant tributes came from past university president, Bishop John J. Dougherty who articulated that: 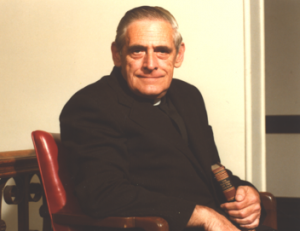 Additional postings regarding the life and legacy of Monsignor Fahy will be forthcoming.  In the meantime, please feel to contact us if you need further information on Monsignor Fahy and all aspects of Seton Hall University.  We can be reached via e-mail at:  archives@shu.edu