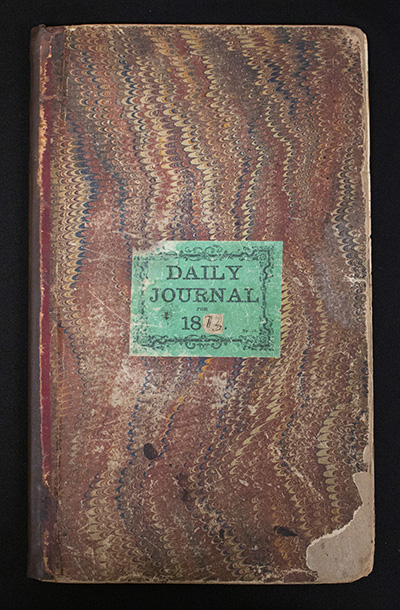 The Archives & Special Collections Center recently acquired a historic diary of a Seton Hall student, which provides interesting glimpses into what it was like to attend Seton Hall College in the 19th century. The diary was written by John Erigena Robinson, who graduated from Seton Hall College in 1874. His diary concerns his everyday life at the college, including worrying about assignments, writing letters to his family and friends, and playing for the college’s baseball team. The campus that Robinson studied at during the mid-1870s was one that centered on a structured, liberal arts education that was emblematic of Catholic higher education during his age. He entered into a world of study at Setonia that consisted of two sessions lasting five months apiece from September through June.

According to his recollections, Robinson primarily lived on campus during the school year, but on many weekends and holidays he would travel the roughly 24 miles from South Orange to Manhattan via the Delaware, Lackawanna & Western Railroad roughly three hours or more round trip to visit family and friends and then reverse his commute prior to the resumption of classes.  After walking from the train station to campus he would study on campus in a setting where “The College buildings are of great architectural beauty, large and commodious . . . ” and quite different in setting with the Orange Mountains in the background as opposed to the more congested streets of Brooklyn.  Along with the scenery and the structures where he would spend most of his time while at the school, Robinson entered a world that was structured and included a liberal arts curriculum of long standing.

After graduation, Robinson returned home to Brooklyn and filled his days by playing baseball and meeting with friends. When the school year re-commences and he does not return to Seton Hall, he muses in his diary:

“First day of September. Tomorrow school opens. I have no fears of the morrow. The noisy Setonia cricket no longer hears my tramp. The boys no longer shake me by the hand. The prefect no longer smiles in anticipation of the sarcasm and the lines he will burden me with. Such is the past. The future is alone known to God. Played ball.”

Like many Seton Hall students, Robinson felt a connection to the College that extended well beyond his graduation, and further diary entries indicate that he remains aware of what is happening there and stays in touch with friends he met in school. His diary provides insight into the ways that student life has changed over the years, but also ways it has remained the same. To read the whole diary and learn more about the context of Robinson’s life, please visit our digital exhibit.  For more information or to view the diary please make an appointment with Brianna LoSardo or Alan Delozier. We can be contacted at archives@shu.edu or (973)-761-9476.