In honor of Women’s History Month, the Archives & Special Collections Center is proud to present an exhibit that honors some pioneering female professionals who made a difference in the building of a stronger administrative and educational institution over the last several decades on campus. 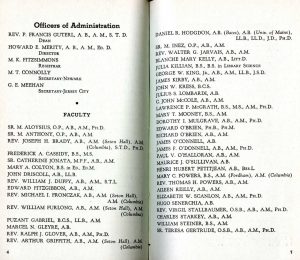 The varied contributions made by women in the annals of Setonia have always been significant from her earliest days forward. A portent of success was found when Mme. Chegary, a successful school mistress sold her academy to the Diocese of Newark in 1856 on land in Madison that served as the first home of Seton Hall.

Upon establishment of the school, the work of the Sisters of Charity was enlisted to provide spiritual leadership and nursing care and supervision of the infirmary during the 19th century.  The mothers of the all-male Seton Hall student body also provided a strong influence as role models and support for their college-bound sons.  The accomplishments of women during the early years of Seton Hall was rarely documented and mostly done in the shadows, but their varied and valuable contributions cannot be denied.

When it came to individual females who began the trend of administrative leadership on campus, Ms. Marie K. Fitzsimmons began her affiliation with Seton Hall as the College Registrar in 1928 and lasted through most of the 1950s.  Her work defined who would ultimately attend Setonia and she also oversaw the dawn of co-education when women were first admitted to the Urban Division of Seton Hall (Newark and Jersey City) in 1937.

Leadership opportunities arose shortly afterwards when Professor  Anne E. Murphy, B.A., B.S. was named as the first Dean of Nursing.  She became the first-ever female department head at Seton Hall in 1940. Her example led the way to the hire of other professional women who continuously led the School of Nursing in succession to the present day.  Other milestones initiated across campus included creation of the Dean of Women positon first held by Ms. Ruth Dugan, A.M. during the early 1950s.

When it came to national recognition, Seton Hall instituted its Law School in 1951 and school administration selected Miriam T. Rooney, LL.B. as the inaugural Dean who served in this capacity until her retirement in 1959. 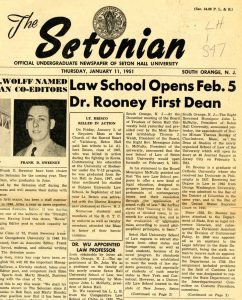 Eventually more women served as key managers, faculty, vice presidents, deans, trustees, and within the last few years assumed top  positions within the administration.  Provost and Executive Vice President, Karen Boroff, Ph.D. and Acting University President appointed in 2016 and Mary Meehan, Ph.D. named in 2017 who serve in their respective capacities have made history and continue to blaze trails in the process.

Examples from our collection will be on exhibit from February through May of 2019 in the First Floor foyer of Walsh Library located across from the stairs and elevator.