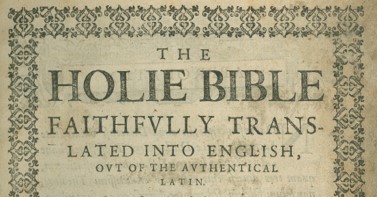 Counted among the earliest and most influential volumes found in our Rare Book Collection is the Douai-Rheims Bible which is the English language translation of scripture designed specifically for Catholic readership from the original Latin Vulgate that was created by theologian and historian Eusebius Sophronius Hieronymus, or Jerome (345-420 AD), the present day patron saint of translators and librarians. 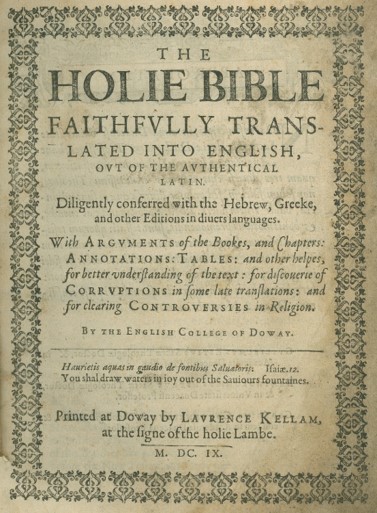 The enduring title for this work comes from the geographical connections to the adapted work hosted by the English University at Douai (Northern France) and Reims, France where the Old Testament and New Testament were evaluated from the translations made by St. Jerome centuries earlier.  The first mass published volume was created in 1582 which featured the New Testament proper.  This served as a prelude to the companion Old Testament version that was published in two volumes between 1609-10 by the University of Douai.  This particular compilation illustrated here encompasses the Books of Genesis to Job (first volume) and transitions to the Psalms, Machabees, and Apocrypha of the Vulgate (second volume) and includes source notes on the translation process via the Hebrew and Greek versions of the Latin Bible. 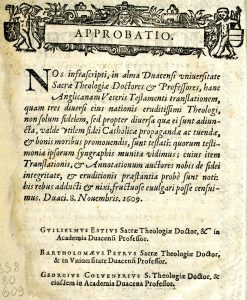 With a proliferation of Protestant-created bibles including the King James version (1604-11) and many earlier examples from the 16th century, the primary rationale for the creation of the Douai-Rheims Bible centered around the need by Catholics in England to create a clearly legible sacred text as a means of helping to discourage conversion in the face of conversion temptation brought on by Counter-Reformation preachers and to clearly articulate the articles of faith in a vernacular that could be easily understood and interpreted. 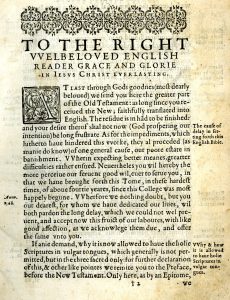 This work was first published through the intercession of Lawrence Killam at Douai and the text once it went through the printing press came in a flat case leather binding measuring 6 1/2 x 9 in.  Examples of the title page and frontispiece can be found in the illustrations provided.  Subsequent reprints and editions have been made of this trailblazing work making it one of the read religious-centered tomes over since its first appearance over 400 years ago.  For more information contact Alan Delozier, University Archivist/ Education Coordinator via e-mail: Alan.Delozier@shu.edu or by phone at: (973) 275-2378.