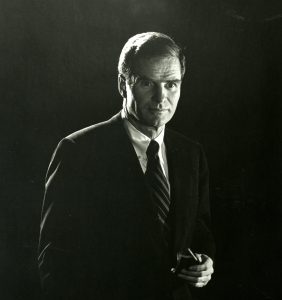 We are pleased to announce a new exhibit in honor of the late Governor Brendan T. Byrne which is being hosted by the Archives & Special Collections Center through the Spring 2018 semester.

Brendan Thomas Byrne was born April 1, 1924 in West Orange, New Jersey, the fourth of five children born to Francis A. Byrne and Genevieve (Brennan) Byrne. He attended Seton Hall College in 1943 before leaving to enroll in the United States Army Air Corps as a navigator during World War II. Byrne earned a Distinguished Flying Cross, three Air Medals, and a Presidential Unit Citation before his honorable discharge from the service in 1945. Upon returning from overseas, Byrne graduated from Princeton University in 1949 and received his LL.B. from Harvard Law School two years later. The future governor first worked as a clerk for future Chief Justice of the New Jersey Supreme Court, Joseph Weintraub and assisted attorney John W. McGeehan of Newark during the early 1950s. 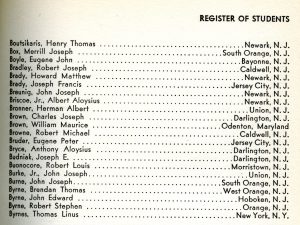 The public career of Byrne began in the early 1950s as a member of the West Orange Planning Board. He then earned appointed as Assistant Council within the administration to Governor Robert B. Meyner in 1955.  Byrne was later promoted to the position of Executive Secretary the following year, and held this post until 1959.  Later that year, Byrne was named Deputy Attorney General in charge of the Office of the Prosecutor for Essex County

and within months he was made the Essex County Prosecutor.  Over the next decade, Byrne argued over 60 different cases before the New Jersey Supreme Court and achieved recognition for prosecuting dishonest contractors and powerful underworld figures. Starting in 1968, Byrne served as President of the State Board of Public Utility Commissioners. He left this position when he was appointed to the New Jersey State Supreme Court in 1970.  In 1971, he handed down a decision that declared the state law on capital punishment unconstitutional. He resigned from the Supreme Court in 1973 to run for Governor.

The platform chosen by Byrne in the gubernatorial election of 1973 was based on the slogan “one honest man can make a difference.” Between the years of 1970 and 1973, several New Jersey public officials were indicted by federal grand juries, and with Watergate still in the news, Byrne ran on a platform of restoring public confidence in the government. His opponent was Republican candidate Charles Sandman, who criticized Byrne throughout the campaign for his reluctance to publicly state his position on controversial issues, but instead preferred to issue position papers. On November 6, 1973, Byrne won by over 721,000 votes. 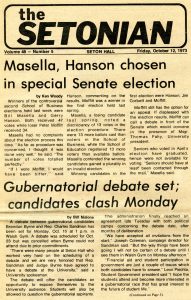 Nicknamed “One Term Byrne” by critics, he surprised political experts in 1977 when he won re-election against Republican candidate Raymond H. Bateman. Despite being considered the underdog in the race, Byrne won by a large majority.  During his two terms time as governor, he created a legacy that includes the Meadowlands Sports Complex, development of Casinos in Atlantic City, dedication to the environment exemplified in the Pinelands Preservation Act, and a commitment to improving public education.

After stepping down as governor in 1982, Byrne returned to the private sector as an attorney, co-wrote a column in the Newark Star-Ledger with his gubernatorial successor Thomas Kean, and taught classes at various colleges prior to his death on January 5, 2018.

This exhibit (which will run throughout the Spring of 2018 and viewable at the Archives & Special Collections Center, located on the First Floor of Walsh Library) shows the ties Byrne had to Seton Hall as a student prior to the call to service in World War II.  In addition, included are his debate stop during his first gubernatorial campaign, honorary degree ceremony (1974), and aid with the Meadowlands Development project which bore his name during the 1970s-80s where Seton Hall sponsored a number of events from Men’s Basketball games (held regularly between 1982 until 2007) to Commencement and other activities of note. Additionally, select materials that provide an overview of his campaigns, work among the citizenry of New Jersey, summary of initiatives, and related items that provide a look at the man and his work on behalf of the Garden State and its citizens encompass this display.

More information on the Brendan T. Byrne Collection at Seton Hall University can be accessed via the following site link – http://academic.shu.edu/findingaids/mss0007.html  or you can contact Alan Delozier, University Archivist/Education Coordinator by e-mail at: <Alan.Delozier@shu.edu> or phone: (973) 275-2378.