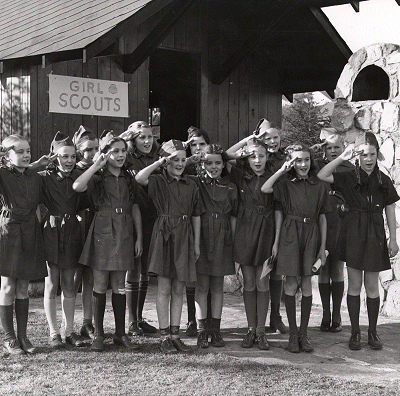 When most Americans think of those fighting the war sweeping the globe, they think of soldiers.

Most are young men, ideally in peak physical condition. They wear uniforms while carrying weapons and even more responsibility, all issued by the United States military. It is these soldiers who are at the forefront of the war, serving America in the struggle against the Axis Powers.

These are the men who are leading the charge.

On the homefront, however, is a very different kind of fighter. Like those overseas, they too wear uniforms and bear responsibility for the war effort – but they have been known to carry cookies, not firearms. These youngsters, ranging in age from 7 to 18, are the Girl Scouts of the USA.

Broken into three age groups – the Brownies (7-9), Intermediates (10-14) and Seniors (14-18) – the Girl Scouts were founded by Juliette Low in 1912 in Savannah, Ga. Originally a group of just eight, the organization is comprised of roughly 670,000 members. Now troops across the country are doing everything they can to aid a nation at war. With the United States in need of all the help it can get, these young patriots have come to the rescue. 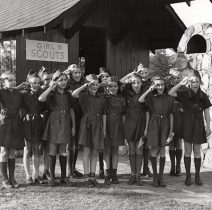 Take, for example, the 2,000 Girl Scouts in Washington, D.C. who hosted the “Volunteers for Victory” pageant in April. With First Lady Eleanor Roosevelt and Supreme Court Justice Owen D. Roberts among the 5,000 spectators, the Girl Scouts told the story of their organization’s growth. The performance was part of the Scouts’ campaign to sell war bonds and stamps. The pageant began with the reading of a letter from Henry Morgenthau in which the Secretary of the Treasury thanked the Scouts for their “great service.”

The Girl Scouts outdid themselves in March, registering 10,000 members for “victory service” in New York City. With 100 planned bureaus strategically spread across the city, Scouts will provide medical assistance to the Office of Civilian Defense, the Red Cross, local hospitals and others in connection to the war effort.

Eleanor Edson, metropolitan director of the Girl Scout Council of Greater New York, described the initiative as “somewhat like a nurses’ registry.”

The council, when announcing its plan, stated that each bureau will be led by an adult volunteer director. Already, 68 bureaus are up and running – 18 in Manhattan, 20 in Queens, 16 in Brooklyn, 10 in the Bronx and four in Staten Island. At these bureaus the Scouts perform a multitude of tasks, including knitting, rolling bandages, clerical assignments, caring for kids whose parents are performing war work, and preparing sandwiches for men in the armed forces.

The girls’ impact in New York City does not stop with these bureaus, however.

In addition, there is the Girl Scout Salvage Work Shop. Located on 120 East 86th Street, the shop was opened by the First Lady in May. The storefront’s opening ceremony began with Girl Scout Yvonne McCahill presenting Mrs. Roosevelt with a basket made from salvaged materials. A gesture symbolizing America’s resourcefulness, the basket was painted blue and filled with red and white flowers.

Run by the Scouts’ New York headquarters, the shop’s objective is to collect and distribute war essentials such as rubber, metal, tin foil, clothing, silk, stockings, books and white cloths.

Of course, contributions from the Scouts are not limited to the Empire State or even the East Coast. All over the United States these girls are selling war bonds, promoting scrap drives and assisting in other ways. In addition, Girl Scout troops are cultivating Victory Gardens – small plots where fruits and vegetables are grown for the home front so that more of the food from America’s large farms can be sent to U.S. troops and allies overseas. Others are lending a helping hand to farms and operating courier services by way of bicycle.

Like almost everyone else on the home front, the Girl Scouts have become accustomed to sacrifice. In order to focus on their volunteer efforts, the Scouts have had to give up some of their favorite hobbies.

On both coasts Mariners, the nautical branch of the Girl Scouts, have been barred from sailing. Much like the restrictions that forbid the gathering of large crowds on the West Coast due to fears of another Japanese attack, the Mariners have been told to stay out of open water. Comprised of 5,000 members, the sub-group has 283 ships. Those with vessels located inland can still hit the water, but the majority will have to stay anchored.

While these sea-loving girls could sit around and mope about being unable to sail, they are instead making good use of their newfound time. Mariners, who are between 15 and 18 years old, are now learning about operating switchboards, first aid, preparing canteens, fire prevention and sewing.

The biggest change for the Girl Scouts, however, has to do with what they are selling.

In a tradition nearly as old as the organization itself, Girl Scouts have always sold cookies. The two have become synonymous, with 125 councils holding Girl Scout Cookie sales nationwide in 1937.

The war, however, has forced Scouts to cut back on their baked good offerings. With sugar, flour and butter in short supply, troops have begun to sell calendars as well.

Some Girl Scouts are among the thousands of Japanese-Americans relocated from their homes on the West Coast to military zones inland. Surrounded by walls, fences and armed guards, young girls of Japanese ancestry are feeling the impact of war in a much different way than those of other ethnicities. Despite the poor quality of life inside these camps, scouting still exists thanks to the Juliette Low Memorial fund. Some money the fund was given to the military zones at the request of the Scouts’ Seattle council in an attempt to provide girls there with social activities.

Now, troops are thriving in desolate places like Poston, Ariz. and Manzanar, Calif., the locations of two major military zones.

Naturally, Girl Scouts outside these zones have the ability to have a much greater impact on the war. Their efforts and service are the direct result of the organization’s values. According to Girl Scouts national president Helen Means, volunteering, outreach and sacrifice are rooted deep within the Girl Scout tradition.

“To train youth for active service and good citizenship,” Means said, “is America’s only permanent defense.” 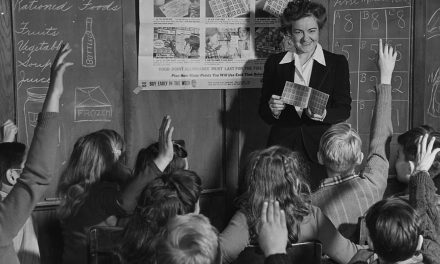 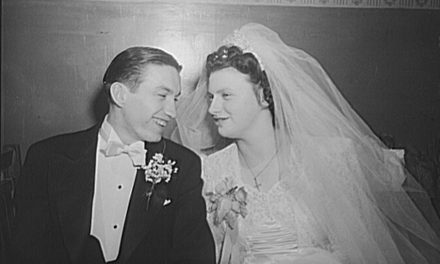