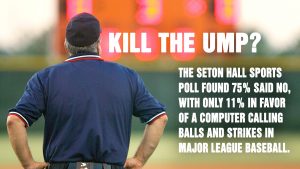 75% say they prefer an umpire to a computer making balls and strikes call; one third think undetected drugs are driving all those homers

South Orange, NJ, October 26, 2017 — In a week in which a record number of home runs were hit in a single World Series game…..and post-season coverage provides continuous use of the strike zone boundaries for each pitch….fans are clear that they want umpires – and not a computer – calling balls and strikes…..but also suspicious of the use of performing enhancing drugs driving all those homers.

These were among the findings in the latest Seton Hall Sports Poll, conducted this week across the nation among 715 adults, on landlines and cellphones.  The baseball data is based on the 62% of respondents that follow baseball and has a margin of error of 4.8%.

Perhaps driven by the umpire calls when the strike zone box is up, (or perhaps just by being traditionalists), a strong 75% preferred that the umpire make the ball-strike calls, with only 11% opting for computer calls.  (14% had no opinion).

“Either fans are leaning toward the more traditional way of doing things or they simply don’t want to give up their God-given right to bash the umpire for missing ball and strike calls,” said Rick Gentle, director of the poll, which is sponsored by The Sharkey Institute as part of the university’s Stillman School of Business.”

On the matter of home runs, of which a record number were hit this season in the Major Leagues, respondents were asked to say “yes” or “no” to a variety of factors.

“While performance enhancing drugs are not among the top reasons, the fact that nearly 1 in 3 fans think it’s still part of the game should be alarming to the Commissioner’s Office,” noted  Gentile.

On pace-of-play, another much discussed issue among baseball people, fans were pretty evenly divided, favoring by 43%-40% a rule restricting in-inning mound meetings….but stayed traditional on limiting in-inning pitching changes, voting “no” by 57%-26%.

“The latter would be a major rule change which would need approval of the player’s union as well as the Commissioner’s Office, and clearly among fans, there is no desire to go there,” said Gentile.

The Poll also asked,  “how often would you say you watch an entire live post-season baseball game,” with 45% saying “occasionally,” 26% saying “often” and 17% saying “never”.

This poll was conducted by telephone October 23-25 among 715 adults in the United States. The Seton Hall Sports Poll is conducted by the Sharkey Institute.

(IF “NOT AT ALL” SKIP TO DEMOGRAPHICS)