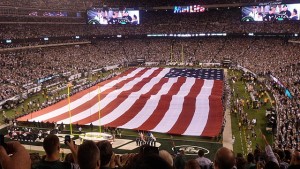 Working at a sports venue doesn’t seem like a dangerous job on the surface. I never entertained the idea that large sports venues like MetLife Stadium, where I intern, could be the target of a major terrorist attack. Maybe it was naivety, or maybe I just didn’t have any reason to have such a concern.

All of this changed after the tragedy that struck Paris on the evening of November 13, 2015. I received a message from my boss before seeing any of the news. I manage the stadium’s social media account and she instructed me not to respond to any messages regarding the terrorist attacks until the authorities make their statement and to immediately report any worrisome messages. After this message, I turned on the news and saw the horror that was unfolding in France. So many thoughts flooded my mind, but still, none of them involved my safety at work.

That Sunday, the Giants were hosting the New England Patriots. That morning, I woke up and did my typical morning routine. Then it was time to head to the stadium. When I arrived at the parking lot, I could sense a much larger police presence, but it wasn’t overwhelming by any means. I made it to the employee entrance of MetLife Stadium and that’s when it became apparent that this wasn’t going to be just another day at the office. It normally takes me about two or three minutes to get inside the stadium. That day, it took me over twenty minutes just to get to the metal detectors. Security personnel was doing very thorough scans of every employee before they went through the metal detectors. Once I was in the stadium and got to my office, you could feel a sense that everybody was slightly on edge. Personally, I settled in and started working on my responsibilities for the day.

An hour or two into my workday, I received a call from my mother. I could hear concern in her voice. She asked me if I was at work, if I felt safe, how much of a security presence there was, and a multitude of questions that you can imagine any mother would ask in this situation. I assured her that I felt safe and that security was doing a diligent job of screening everybody before they even got close to the venue. Once I thought that I’d convinced her of my safety, I got back to work. The game took place and everything felt mostly normal.

I refuse to live in fear of terrorism. Yes, there are bad people in this world that want to harm the innocent. However, living in fear is letting them win. They want to take freedom from the world and they want you to be afraid. This world is much stronger than that, though. For every person that wants to cause harm in this world, there are thousands of people that will do everything in their power to prevent that from happening.

So to answer the question the Sports Poll asked of the public after the terror attack at the soccer stadium in Paris: “How concerned does this make you in regard to attending a sporting event in a large venue in the United States?” I am not concerned about attending sporting events at large venues in the United Stated. Sports are one of my biggest passions, and nobody, not ISIS or any other group, can take that away from me.