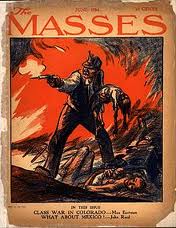 “The Theater of Engagement: The Provincetown Players and the Great War”
Chaired and organized by Sharon Friedman, Gallatin School, NYU

In their interdisciplinary study 1915: The Cultural Moment, Adele Heller and Lois Rudnick observe that progressive groups in New York’s Greenwich Village devoted to creating “a millennium of social peace and justice on American shores, faced the paralyzing horror of the Great War, now entering its second of four years.” Many involved in the Provincetown Players, one of the most important cultural institutions of the Village during this period, along with the radical faction of the Liberal Club, the revolutionary publication The Masses, and the discussion group Heterodoxy, were haunted by the war in Europe and the growing involvement of the United States, the imposition of the draft law, the persecution of dissenters, the Espionage and Sedition Acts, and ultimately the “Red Scare.” Among the diverse stylistically and thematically avante garde works produced by the Players are plays that give dramatic voice to the war issues debated among these and other groups during this period.