One of the most active fields of clinical investigation in immuno-oncology today is augmenting responses to checkpoint [CTLA4 or PD-(L)1] inhibition therapy by re-sensitizing tumors that were initially unresponsive or had stopped responding to treatment. In order for checkpoint inhibition to work, the tumor microenvironment must contain antigen-specific CD8+ tumor-infiltrating T-cell lymphocytes (TILs). This is called being “hot” or having an IFN-gamma signature.

There are four types of tumor microenvironments based on the presence of CD8+  cells and PD-L1 expression. “Hot tumors” are Type I (adaptive immune resistance), the most auspicious for anti-PD(L)1 treatments; by blocking the PD-(L)1 axis via checkpoint therapy, immune-mediated killing by CD8+ T-cells is restored. The goal then is to either prevent hot tumors from cooling off, that is, transitioning to Types II-IV, and turning “cold tumors hot.”

The Cancer Research Institute maintains a current list of the 1,105 checkpoint combination trials geared to induce change in the tumor microenvironment to favor the Type I phenotype –  https://cancerresearch.org/scientists/clinical-accelerator/landscape-of-immuno-oncology-drug-development. 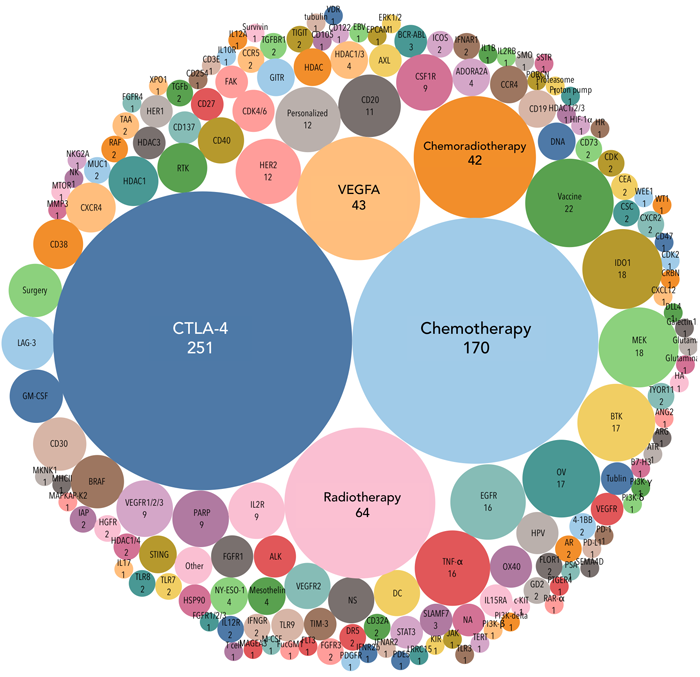 Eighteen of the studies employ combinations with IDO-1 (indoleamine 2,3-dioxygenase) inhibitors. IDO is a expressed by cancer cells; it oxidizes tryptophan, which is vital for the healthy functioning and survival of CD8+ TILs. In a Phase 2 study in treatment naïve patients with metastatic melanoma:

in those who received the ultimate dose of 100 mg twice daily of epacadostat with pembrolizumab every 3 weeks, the median progression-free survival (PFS) of the overall population was 12.4 months; for pembrolizumab alone we would expect a PFS of around 7 months. Among the total of 54 treatment-naive patients, median PFS was 22.8 months—again, very impressive. 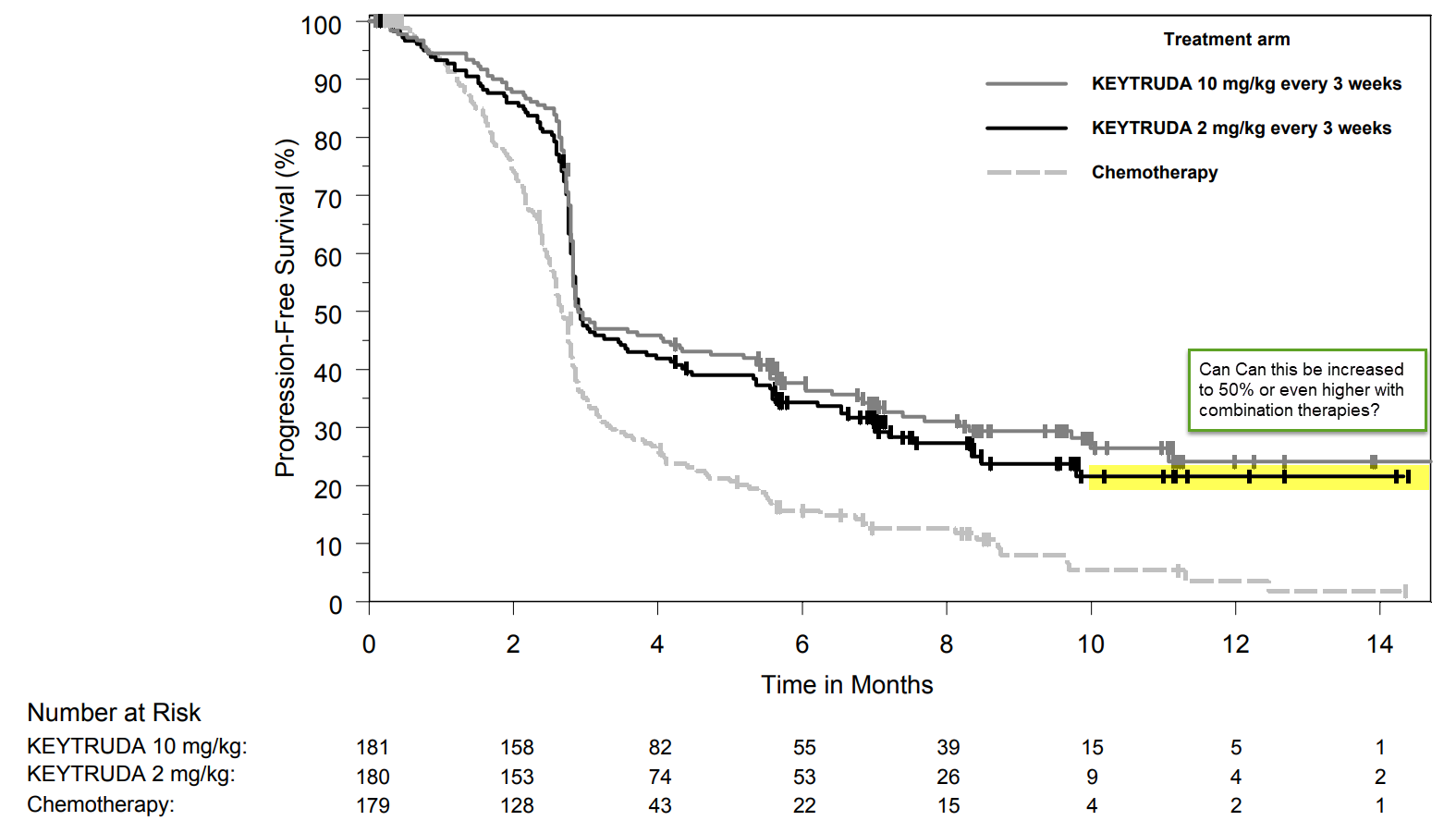 Figure 3. Pembrolizumab demonstrates a ~20% long-term survival benefit. Could that be increased to 50%, or even more, with combination therapy? https://www.merck.com/product/usa/pi_circulars/k/keytruda/keytruda_pi.pdf

investigators tracked a hazard ratio of 1.00, which “leaves no doubt that in this study… epacadostat didn’t perform,” said Steven Stein, the chief medical officer, in the call. And there was no positive glimmer of hope seen in any subgroup analysis. “Given those hazard ratios it is going to be difficult to discern a subgroup with sufficient effect.”

What is TLR-9 and how does it enhance anti-PD-(L)1 therapy?

However, there are no shortage of approaches. For example, early results with intratumoral injections of TLR-9 agonist CMP-001 (Checkmate Pharmaceuticals) seem quite encouraging. Eighteen of 85 patients regained responsiveness to pembrolizumab. Moreover, abscopal effects – shrinkage of tumors that were NOT injected with CMP-001 – were shown, thereby documenting a systemic immune phenomenon.

CMP-001 consists of a synthetic immunostimulatory DNA molecule (CpG-A) encased in a nonreplicating virus-like particle that protects the DNA from degradation. The drug stimulates TLR9 activity, which leads to activation of tumor-associated plasmacytoid dendritic cells and induction of an interferon-rich microenvironment and antitumor T-cell activation. 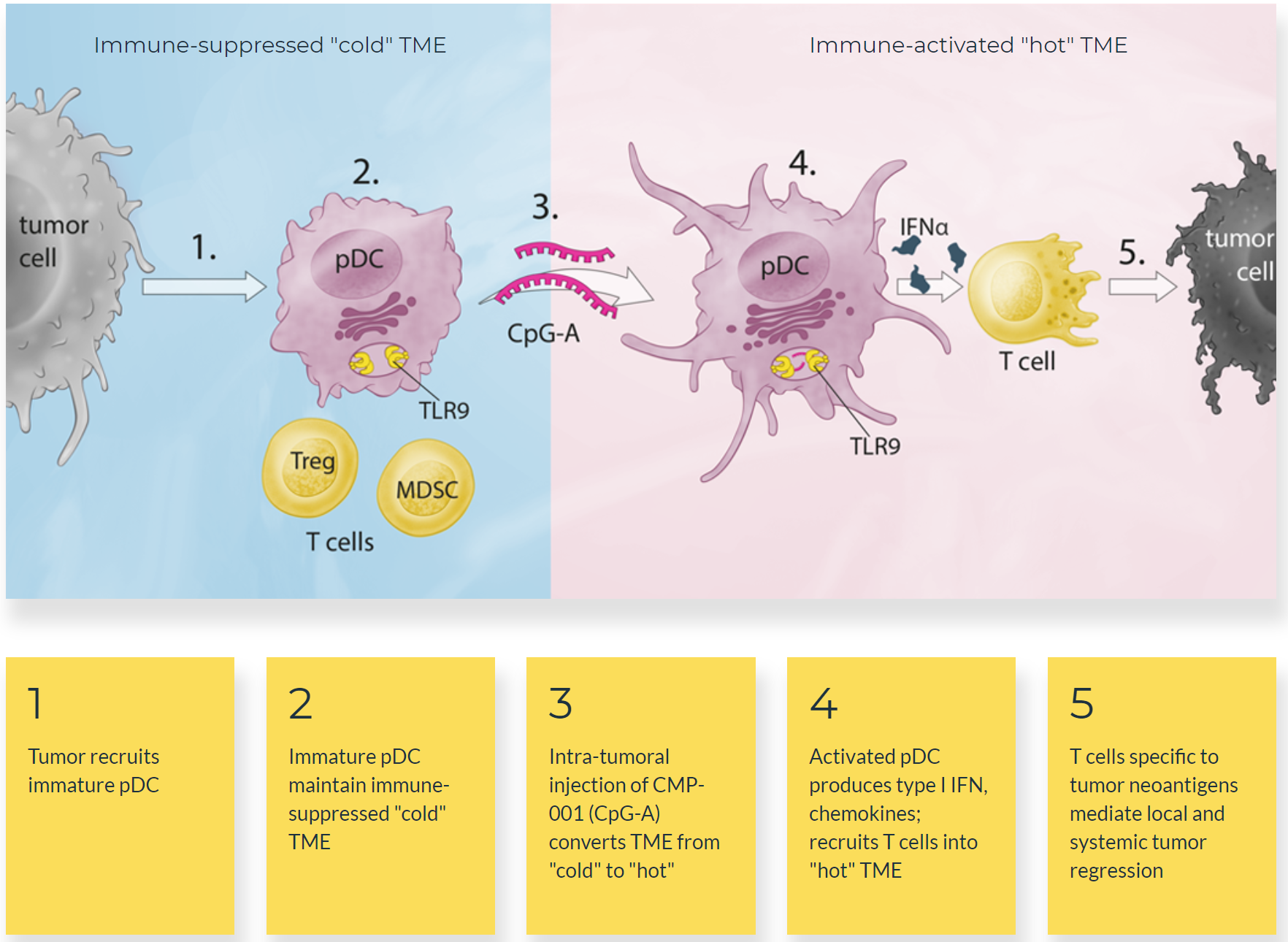 Twenty-two percent of the patients have responded to the combination thus far – 13 of the 22 responding patients continue to receive treatment and the median duration of response has yet to be reached:

Enrollment in the expansion of the phase continues, he added, and clinical investigation of CMP-001 has expanded into other types of tumors.

Given that many patients do not respond to immunotherapy and others develop resistance to the treatment, investigations such as the one described by Milhem have substantial implications for the field of immuno-oncology, said Topalian.

“This trial looks at a very important group of patients — those who do not respond to anti-PD-1 treatment or who have stable disease but don’t make it over the threshold to a complete or partial response,” she said. “The question is how can we further activate the immune system to get those patients over that threshold to response?”

In response to a question, Milhem acknowledged that CMP-001 might also have a “priming” effect in patients who discontinued anti-PD-1 treatment because of loss of response. Rechallenging with anti-PD-1 therapy might be feasible in such patients.