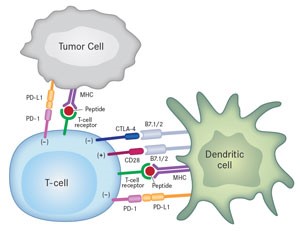 Figure 1. Immune checkpoint blockade. Inhibitory receptors such as anti-cytotoxic T-lymphocyte antigen 4 (CTLA-4) and programmed death 1 (PD-1) expressed on tumor-specific T cells lead to compromised activation and suppressed effector functions such as proliferation, cytokine secretion, and tumor cell lysis. Modulating these receptors using monoclonal antibodies, an approach termed “immune checkpoint blockade,” has gained momentum as a new approach in cancer immunotherapy. This treatment concept was first introduced in patients with advanced melanoma: in this patient population, the anti-CTLA-4 antibody ipilimumab was the first drug ever to show improved overall survival in phase III trials. Antibodies directed against PD-1 and its ligand, PD-L1, have shown much promise in the treatment of melanoma, renal cell cancer, non-small cell lung cancer, and other tumors, as evident by encouraging rates and durability of tumor responses. Because of the successes with immune checkpoint inhibitors in cancer immunotherapy, many new agents and strategies, including combination approaches, are being developed at a fast pace. http://www.onclive.com/publications/contemporary-oncology/2014/february-2014/immune-checkpoint-blockade-in-cancer-inhibiting-ctla-4-and-pd-1pd-l1-with-monoclonal-antibodies

Considering the positive trends in the endpoints achieved in the trials of PD-1/PD-L1 + CTLA-4 combinations (renal cancer and NSCLC discussed in #1 and #2, above), the overall survival analyses may, indeed, prove that combined checkpoint therapy is beneficial. Whether or not this is the case, the field is undeterred. Undaunted by the setbacks, and as an indication of the opportunity that checkpoint inhibitor therapy represents, AstraZeneca and Merck signed a collaboration to investigate combinations of drugs, including Lynparza (olaparib, a PARP inhibitor) and Keytruda (PD-1), Imflizi (PD-l1), tremelimumab (CTLA-4), and selumetinib (MEK inhibitor).

Lynparza is approved for ovarian cancer patients with BRCA mutations, however, in a phase 3 study versus standard-of-care chemotherapy in patients with HER2-negative breast cancer and BRCA1 or BRCA2 mutations, Lynparza lowered the risk of disease worsening or death by 42%.

Figure 2. PARP inhibition. PARP Inhibitors can be used for ovarian, breast and prostate cancer and generally target mutations in the BRCA1, BRCA2 and inhibitor azd2281. These drugs represent a new way to treat BRCA-associated cancers, with the parp inhibition having the potential to overwhelm cancer cells and whilst they are not a cure for cancer the inhibition for the body to produce parp, leads to the BRCA cancer cells unable to be repaired as they grow: ultimately leading to the cancer inhibition and not being able to grow.
The reason this drug is such a promising target is that it has demonstrated significant anti-tumor effects in several types of cancer and parp inhibition does not appear to be critical for normal non-cancerous cells, thus parp inhibitors have the potential to impair tumor growth without damaging the normal cells, and therefore causing less side effects for those that receive the inhibitor cancer treatment. If parp trials are successful this may be one of the most famous anti-cancer drugs. http://www.parp-inhibitors.com/

And, Keytruda has shown benefit in patients with triple negative breast cancer (TNBC – lack of over-expression of estrogen, progesterone, and HER-2) in a phase 2 trial:

The trial included two groups of patients with advanced breast cancer that had spread to other locations. The first group was composed of 170 patients who had received extensive earlier treatment. Keytruda is a checkpoint-blocking drug, and patients in the first group were included regardless of whether the checkpoint molecule PD-L1 was present in the tumor. The second group had not received earlier treatment and had tumors expressing PD-L1. Among pre-treated patients, Keytruda shrank tumors by more than 30 percent in eight (5 percent) of the women, and stabilized disease in 35 women (21 percent) of the group. All eight patients who saw their tumors shrink lived for at least another year. In comparison, the patients who did not experience tumor regression had lower survival rates.

In the group that received Keytruda as their first treatment, 12 of 52, or 23 percent, saw tumors shrink by more than 30 percent. The treatment also stabilized disease in another 17 percent. The study is the first triple negative breast cancer immunotherapy trial to date, and also is the largest study of immunotherapy in this cancer form.

I am anxious to see the results of combination studies of Lynparza and Keytruda in patients with breast cancer.