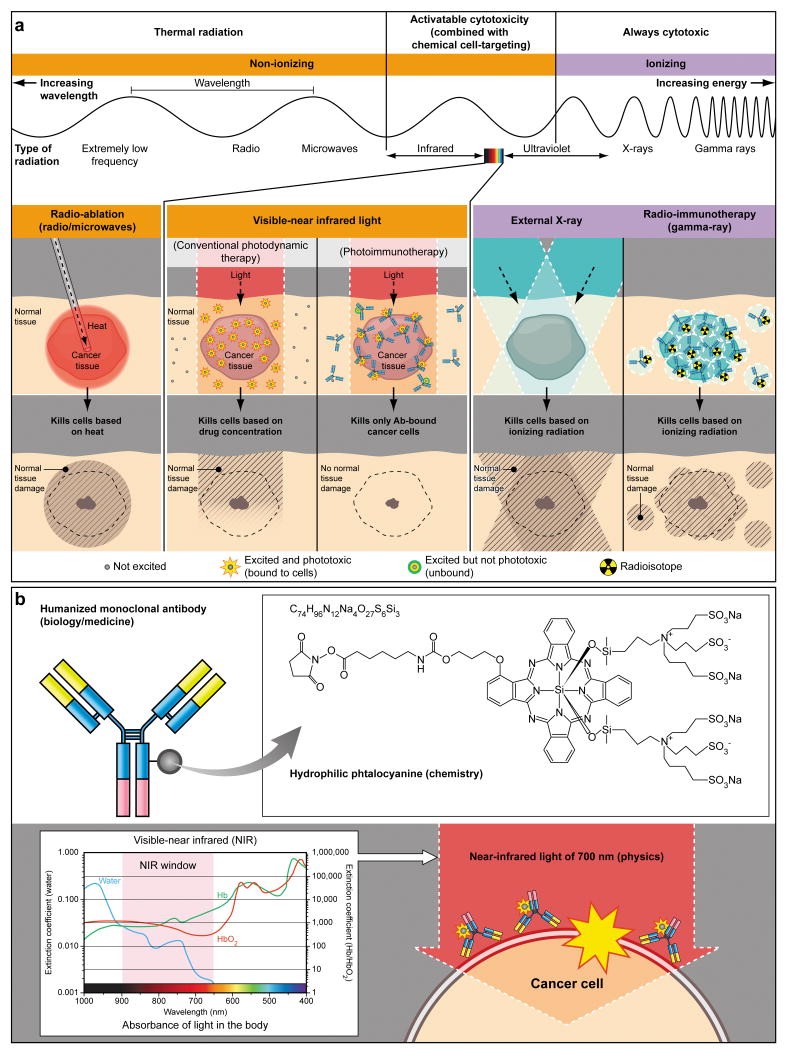 Figure 1. A schema for explaining selective cancer therapy with photoimmunotherapy (PIT) in the context of other physical cancer therapies employing electro-magnetic wave irradiation. Although other physical cancer therapies induce different types of damages in the normal tissue, PIT dedicatedly damages cancer cells without damaging normal cells or tissues. (b) A schema for explaining photo-physical, chemical and biological basis of PIT. Humanized antibodies are employed as a delivery vehicle from the biology and medicine points of view because of its highest binding specificity, greatest in vivo target delivery, low immunogenicity among the clinically applicable targeting reagents. A hydrophilic phtalocyanine is employed as a activatable cytotoxic “Nano-dynamite” reagent from the chemistry points of view because of its great absorption of near infrared light of 700nm and strong cytotoxicity induced only when associating with the cell membrane. Near infrared light of 700nm is employed as an initiator for activating cytotoxicity from the physics points of view because of its high energy among non-harmful non-ionizing photons and great in vivo tissue penetration. https://www.ncbi.nlm.nih.gov/pmc/articles/PMC3233641/figure/F1/

The advantages and disadvantages of using a photo-reactive immunoconjugate are the same – localization of therapy; cellular killing will only occur in areas that the near infrared beam can reach. This is very good for treating localized and light-accessible tumors, or when the target to which the antibody binds is ubiquitously expressed throughout the body; it is not viable, however, viable for the treatment of disseminated disease.

CD25 is the alpha chain of the IL-2 receptor.  It is a type I transmembrane protein present on activated T cells, activated B cells, some thymocytes, myeloid precursors, and oligodendrocytes that associates with CD122 to form a heterodimer that can act as a high-affinity receptor for IL-2. Though CD25 has been used as a marker to identify CD4+FoxP3+ regulatory T cells (Figure 2) in mice, it has been found that a large proportion of resting memory T cells constitutively express CD25 in humans. 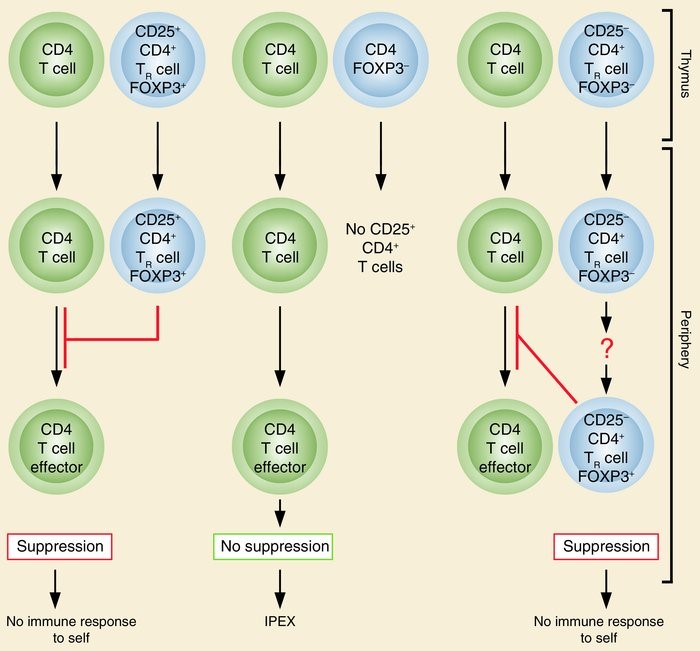 Figure 2. The normal thymus produces FOXP3-expressing CD25+CD4+ TR cells. Some of the naive CD25–CD4+ T cells may also differentiate to FOXP3-expressing CD25+CD4+ TR cells in the periphery. These TR cells suppress the activation and expansion of self-reactive T cells that may cause autoimmune disease. Genetic defects of FOXP3 cause IPEX due to developmental or functional defects of TR cells. http://www.jci.org/articles/view/20274/figure/1

Regulatory T-cells suppress antitumor immune responses; these cells express CD25, however, systemic administration of antibodies against CD25 also cause depletion of effector T-cells and induce autoimmunity. Therefore, there is strong rationale to use anti-CD25 NIR PIT therapy to deplete the tumor microenvironment of Treg’s while sparing systemic Treg’s and other immune cells.

Mesothelin is a glycosylphosphatidylinositol-anchored cell-surface protein that may function as a cell adhesion protein. This protein is overexpressed in epithelial mesotheliomas, ovarian cancers and in specific squamous cell carcinomas. Recent studies highlight three mechanisms by which mesothelin plays a role in cancer progression. First, mesothelin may aid in the peritoneal implantation and metastasis of tumors through its interaction with mucin MUC16 (also known as CA125). Second, mesothelin may promote cancer cell survival and proliferation via the NF-κB signaling pathway (Figure 3). Finally, mesothelin expression promotes resistance to certain chemotherapy drugs such as TNF-α, paclitaxel, and a combination of platinum and cyclophosphamide. However, its cancerspecific expression makes mesothelin a potential target for monoclonal antibody therapy. 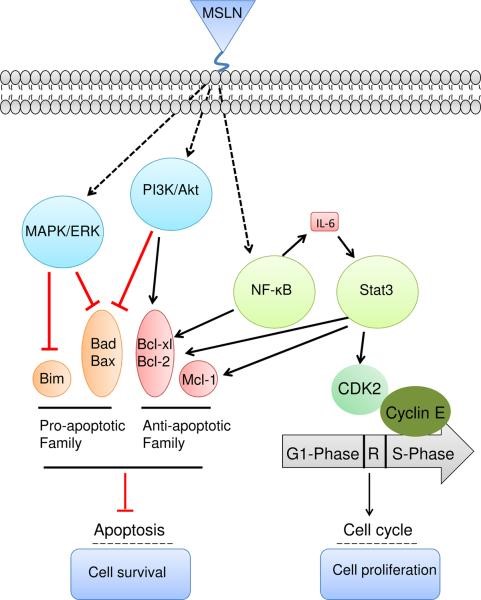 Figure 3. Overexpression of mesothelin leads to higher IL-6 production by constitutively activating NF-κB. High IL-6 can trigger the transcription protein 3 (Stat3), resulting in higher expression levels of the cyclin E/cyclin-dependent kinase (CDK2) complex, as well as speeding the G1-S transition. In addition, activation of NF-κB and Stat3 may induce expression of Bcl-xl and Bcl-2 and inhibit apoptosis signaling. Mesothelin can protect cancer cells from drug-induced apoptosis by stimulating Akt phosphorylation under PI3K activation or the MAPK/ERK signaling pathway to promote the expression of anti-apoptotic genes such as Bcl-2 and Mcl-1 or inhibit the expression of pro-apoptotic factors such as Bad and Bax. https://www.ncbi.nlm.nih.gov/pubmed/22721387

Dr. Kobayashi and his team presented a paper at the AACR meeting in New Orleans in April:

A recently humanized antibody (hYP218) has been generated against mesothelin that demonstrates high affinity binding. Here, we describe the efficacy of NIR-PIT, using hYP218 as the antibody within the APC to target a mesothelin expressing A431/H9 cell. The hYP218 antibody was conjugated to a photo-absorber, IR700 and incubated with the cells. The hYP218-IR700 showed specific binding to cells and cell-specific killing was observed in vitro. After implanting A431/H9 cells (A431 human epithelial carcinoma cell line that has been genetically engineered to over-express human mesothelin) in an athymic nude mouse, tumor-bearing mice were treated with the following regimen of NIR-PIT; 100 μg of hYP218-IR700 i.v., NIR light was administered at 50 J/cm2 on day 1 after injection and 100 J/cm2 of light on day 2 after injection. The hYP218-IR700 showed high tumor accumulation and a high tumor-background ratio (TBR). Tumor growth was significantly inhibited by NIR-PIT treatment compared with the other control groups (p < 0.001), and significantly prolonged survival (p < 0.0001 vs other groups). Thus, the new anti-mesothelin antibody, hYP218, is suitable as an antibody-drug conjugate for NIR-PIT. Furthermore, NIR-PIT with hYP218-IR700 is a promising candidate for the treatment of mesothelin-expressing tumors that could be readily translated to humans.

A Phase 1 trial of NIR PIT is ongoing – it is testing a conjugate of IR700 and cetuximab (Erbitux®), an EGFR1 (epidermal growth factor receptor) antibody, for patients with recurrent head and neck cancer, and is being conducted by the San Diego-based Aspyrian Therapeutics, which licensed the technology from NCI.

Since lysis of cancer cells expressing mesothelin or EGFR sheds antigens and neo-antigens in the tumor microenvironment, destroying Treg cells so that immune reactions against these epitopes makes great sense. The initial therapy kills cells expressing the antigen to which the antibody component reacts (passive immunotherapy), while, the immune response triggered by blocking Treg’s (active immunotherapy) would kill other cells in the tumor environment, and metastases, that express the epitopes spilled from the cancer cells that are lysed.

The study presented at the AACR meeting builds on another finding by Dr. Kobayashi and his colleagues. When tumor cells burst and die in response to NIR-PIT, the cells release their contents into the extracellular space. The healthy immune system adjacent to dying tumor cells detects this cellular debris as “foreign,” resulting in activation of an immune response that further aids in destroying the cancer.