What are bispecific antibodies and CAR T-cells?

Bispecific Antibodies (BsAbs) are antibodies that can simultaneously bind two separate and unique antigens (or different epitopes of the same antigen). The primary application of BsAbs have been to redirect cytotoxic immune effector cells for enhanced killing of tumor cells by antibody-dependent cell-mediated cytotoxicity (ADCC) and other cytotoxic mechanisms mediated by the effector cells (Figure 1). Bispecific antibodies are different from normal monoclonal antibodies given the fact that they have dual functionalities. And so BsAbs are in theory superior to conventional mAbs because they offer the benefit of combining two drugs in one molecule. 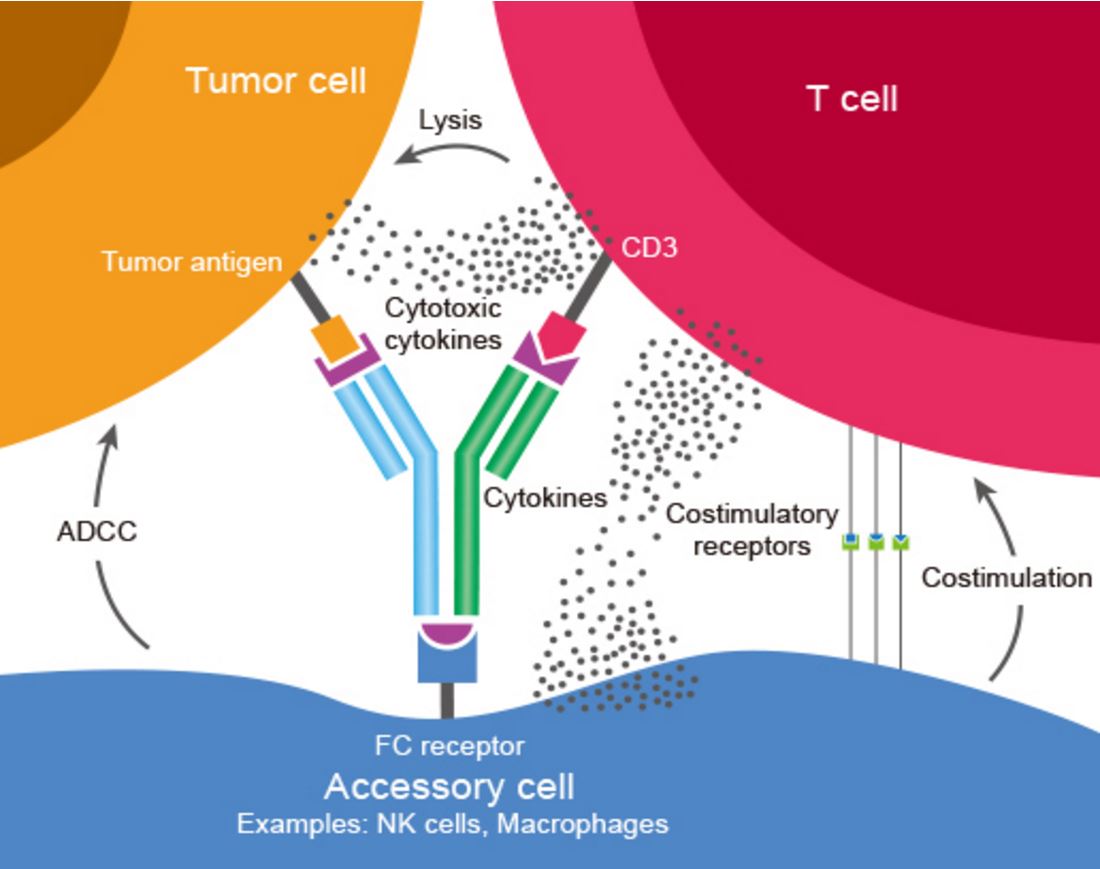 Figure 1. Bispecific antibody mechanism of action: BsAbs bind two different types of antigen. In this image a BsAb is shown, its one arm binding tumor antigen and the other binding CD3 determinant on surface of a T cell. This cross-linking of tumor and effector cells increases their proximity while simultaneously triggering T cell activation. The result is a targeted and highly effective tumor cell killing. http://www.genscript.com/bispecific-antibody.html 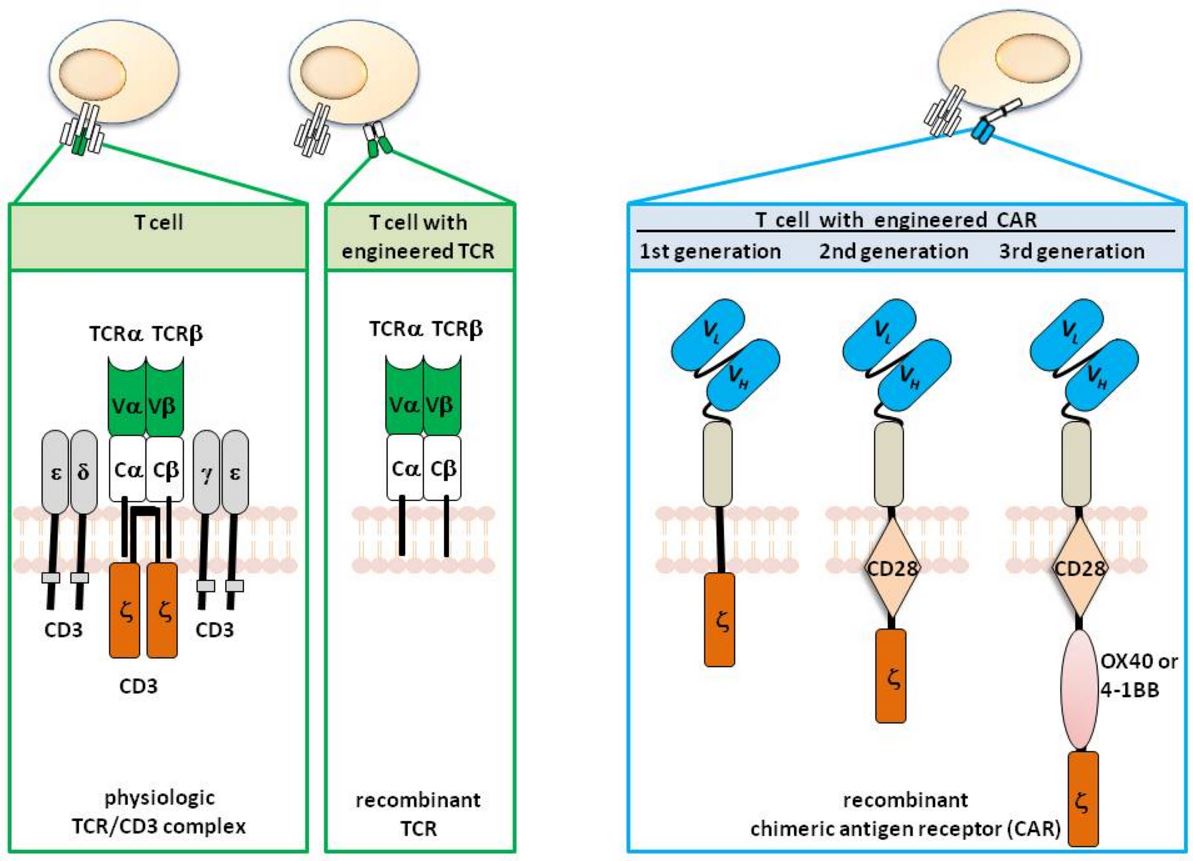 Figure 2. T cells with engineered specificity. T cells physiologically recognize their target by the T cell receptor (TCR) complex which is composed of the TCR α and β chain for recognition and the CD3 chains for signaling. The variable regions of each TCR chain (Vα and Vβ) together bind to the MHC presented antigen, Cα and Cβ represent the constant domains. T cells can be genetically engineered with defined specificity by expression of recombinant TCR αβ chains of known specificity. In contrast to the TCR, the chimeric antigen receptor (CAR) is one polypeptide chain composed of a single chain fragment of variable region (scFv) antibody for antigen recognition, the extracellular spacer domain, a trans-membrane domain and the intracellular CD3ζ (“first generation” CAR), the CD28-CD3ζ (“second generation” CAR), or the CD28-OX40-CD3ζ (“third generation” CAR) signaling chain. http://www.intechopen.com/books/melanoma-current-clinical-management-and-future-therapeutics/can-redirected-t-cells-outsmart-aggressive-melanoma-the-promise-and-challenge-of-adoptive-cell-thera

BCMA is a member of the TNF-receptor superfamily. This receptor is preferentially expressed in mature B lymphocytes, and may be important for B cell development and autoimmune response (Figures 3 and 4). It has been shown to specifically bind to the tumor necrosis factor (ligand) superfamily, member 13b (TNFSF13B/TALL-1/BAFF), and to lead to NF-kappaB and MAPK8/JNK activation. This receptor also binds to various TRAF family members, and thus may transduce signals for cell survival and proliferation. 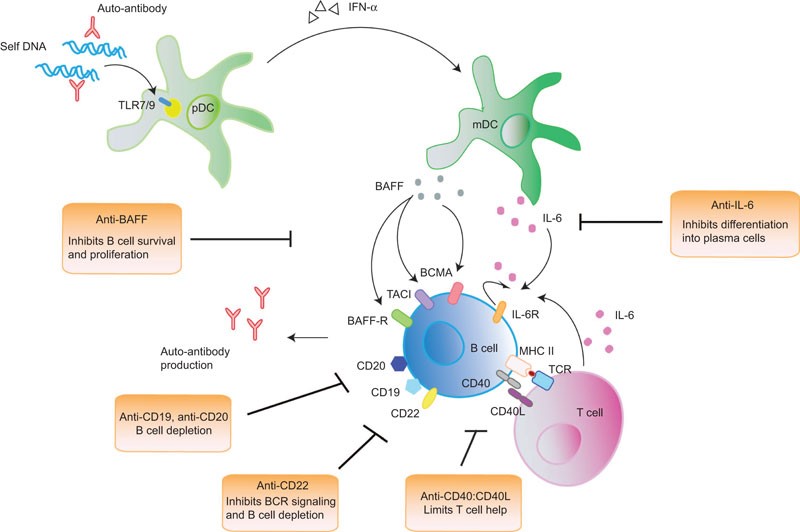 Figure 3. The survival and differentiation of B cells into antibody-producing plasma cells are potentiated and maintained at various levels by different signals that are received from other immune cells. Recognition of nucleic acids and immune complexes by pDCs through TLR7 and TLR9 induces the production of IFN-α in pDCs, which increases the production of BAFF by mDCs. BAFF, after binding to its three receptors BAFF-R, TACI and BCMA, which are expressed on B cells, induces the survival, proliferation and differentiation of B cells into plasma cells. IL-6 is another cytokine that is essential for plasma-cell differentiation. IL-6 is secreted by mDCs and T cells, with the latter interacting with B cells through CD40:CD40L and cognate MHC-II:TCR engagement. B cells also secrete IL-6 after activation, creating an autocrine positive feedback loop that exacerbates its stimulatory effect. Current B-cell-targeted therapies are based on strategies that interfere with B-cell survival and differentiation. CD19 and CD20 are expressed by most B-cell subsets at various developmental stages and anti-CD19/20 antibodies represent therapeutics that eliminates B cells. Anti-CD22, in addition to triggering B-cell death, has an additional effect on inhibiting BCR signaling. Anti-BAFF limits the survival and proliferation of activated B cells, and anti-IL-6 limits the differentiation of activated B cells into plasma cells. Anti-CD40:CD40L represents another therapeutic target by inhibiting T–B cell interaction, thereby reducing T-cell help. BAFF, B-cell activating factor of the TNF family; BCR, B-cell receptor; BCMA, B-cell maturation antigen; IFN, interferon; IL-6, interleukin-6; mDC, myeloid dendritic cell; pDC, plasmacytoid dendritic cell; SLE, systemic lupus erythematosus; TACI, transmembrane activator-1 and CMCL interactor; TCR, T-cell receptor; TLR, toll-like receptor. http://www.nature.com/cmi/journal/v10/n2/fig_tab/cmi201264f1.html

BAFF (B-cell Activating Factor) is a cytokine that belongs to the tumor necrosis factor (TNF) ligand family. This cytokine is a ligand for receptors TNFRSF13B/TACI, TNFRSF17/BCMA, and TNFRSF13C/BAFFR. This cytokine is expressed in B cell lineage cells, and acts as a potent B cell activator. It has been also shown to play an important role in the proliferation and differentiation of B cells. Alternatively spliced transcript variants encoding distinct isoforms have been identified.

Figure 4. During development, B cells express different surface markers, some of which are targeted by therapeutic monoclonal antibodies as indicated. After initial development in the bone marrow, mature B cells migrate via the bloodstream to secondary lymphoid organs and may undergo germinal-centre reactions and class-switch recombination. They form memory B cells and antibody-secreting cells, which are short-lived plasmablasts or long-lived plasma cells. Fading bars indicate reports on the expression of surface markers are not uniform. Abbreviations: BAFF-R, B-cell-activating factor of the TNF family receptor (TNFRSF13C); BCMA, B-cell maturation antigen (TNFRSF17); TACI, transmembrane activator and CAML interactor (TNFRSF13B). http://www.nature.com/nrneurol/journal/v8/n11/fig_tab/nrneurol.2012.203_F2.html

Is BCMA a suitable target for adoptive immunotherapy strategies?

Carpenter and colleagues investigated this question and found the following: 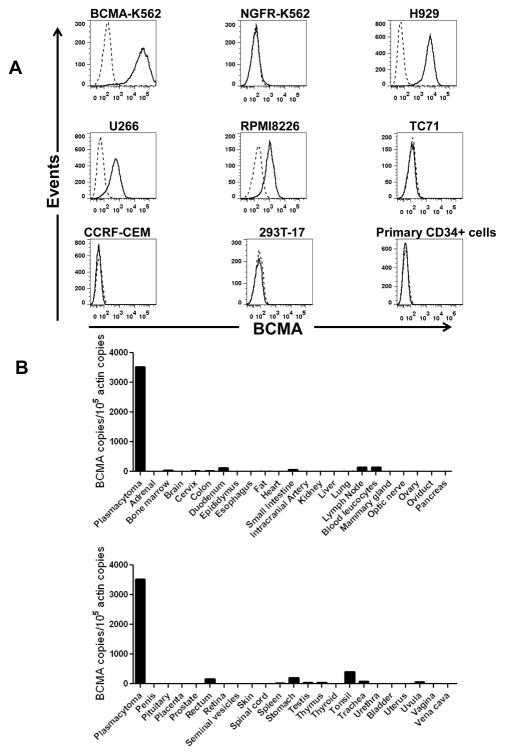 Figure 5. BCMA had a restricted pattern of expression. A, Cell-surface BCMA was detected on multiple myeloma cell lines, but BCMA was not detected on other cell lines. For all plots, the solid line represents staining with anti-BCMA antibodies, and the dashed line represents staining with isotype-matched control antibodies. BCMA was expressed by BCMA-K562 cells but not by NGFR-K562 cells. Flow cytometry staining revealed BCMA on the cell surface of the multiple myeloma cell lines H929, U266, and RPMI8226. BCMA was not detected on the sarcoma cell line TC71, on the T cell leukemia line CCRF-CEM, or on the kidney cell line 293T-17. Primary CD34+ hematopoietic cells lacked cell-surface BCMA expression. All plots are gated on live cells. The primary CD34+ cells plot is also gated on CD34+ cells. B, BCMA cDNA copies were measured in samples of the indicated normal tissues by qPCR. In addition, qPCR was performed on cDNA from cells of a plasmacytoma from Myeloma Patient 1 as a positive control. Neoplastic plasma cells made up 93% of the total cells in the sample. Actin copies were also measured by qPCR in all of the samples, and the results were expressed as the number of BCMA cDNA copies per 105 actin cDNA copies. https://www.ncbi.nlm.nih.gov/pmc/articles/PMC3630268/figure/F1/

Who is pursuing BCMA as a target for immunotherapy?

A number of companies are pursuing anti-BCMA approaches –  GlaxoSmithKline (GSK) has a BCMA-targeted antibody drug conjugate (ADC) – GSK2857916 and AMGN has a bispecific antibody (AMG420) also in phase I trials. Celgene has a collaboration with bluebird bio on a CAR-T product (bb2121) – a phase 1 trial is ongoing in patients with a diagnosis of MM with relapsed or refractory disease and have had at least 3 different prior lines of therapy including proteasome inhibitor (e.g., bortezomib or carfilzomib) and immunomodulatory therapy (IMiD; e.g., lenalidomide or pomalidomide), or have “double refractory” disease to a proteasome inhibitor and IMiD, defined as progression on or within 60 days of treatment with these agents.

GSK’s ADC, which it obtained from Seattle Genetics, is an antibody that targets BCMA and contains monomethyl auristatin E (MMAE), a cytotoxic compound that targets microtubules and is contained in the approved ADC, Adcetris, for Hodgkin lymphoma.

B-cell maturation antigen (BCMA, also termed TNFRSF17) is an attractive therapeutic target due to its restricted expression on normal and malignant plasma cells (PC). GSK2857916 (or J6M0-MMAF) is a BCMA-specific antibody conjugated to the microtubule-disrupting agent monomethyl auristatin F (MMAF) via a protease-resistant linker. To evaluate the clinical potential of this agent, tumour cells from seventy multiple myeloma (MM) patients were assessed for BCMA expression by immunohistochemistry and flow cytometry. All patients tested expressed BCMA, at varying levels, and both surface and intracellular expression were observed. BCMA expression is maintained through relapse, extramedullary spread and in residual disease post therapy. BCMA levels may also be prognostically useful as higher levels of BCMA were associated with poorer outcomes, even taking into account genetic risk. We observed rapid internalization of surface BCMA and newly expressed protein by 1 h, suggesting a mechanism for J6M0-MMAF activity even with low surface antigen. J6M0-MMAF mediated cytotoxicity of MM cells varied with dose and antigen levels, with clonogenic progenitors killed at lower doses than mature cells. In comparison, J6M0-MMAF killing of primary CD138+ myeloma cells occurred with slower kinetics. Our observations support BCMA to be a promising therapeutic target in MM for novel therapies such as J6M0-MMAF.