In the 1920’s Otto Warburg first discovered that tumor cells bypass normal cellular respiration i.e. glucose converted to pyruvate through glycolysis, and the sequential oxidation of pyruvate through the Krebs Cycle in the mitochondria. Instead tumor cells divert pyruvate to lactate dehydrogenase (LDH), which reduces pyruvate into lactate. This type of metabolism, referred to as The Warburg Effect, is normally observed in cells in hypoxic or anaerobic environments, in cells that are proliferating, or in cells in which the accumulation of pyruvate exceeds the capacity of the mitochondria.

Cancer cells generally exist in a hypoxic microenvironment. While hypoxia may be a causative factor of The Warburg Effect, low oxygen levels are not solely responsible for this change, because tumor cells exhibit this altered metabolism even IN the presence of sufficient oxygen. As such, The Warburg Effect is also termed aerobic glycolysis (Fig. 1). 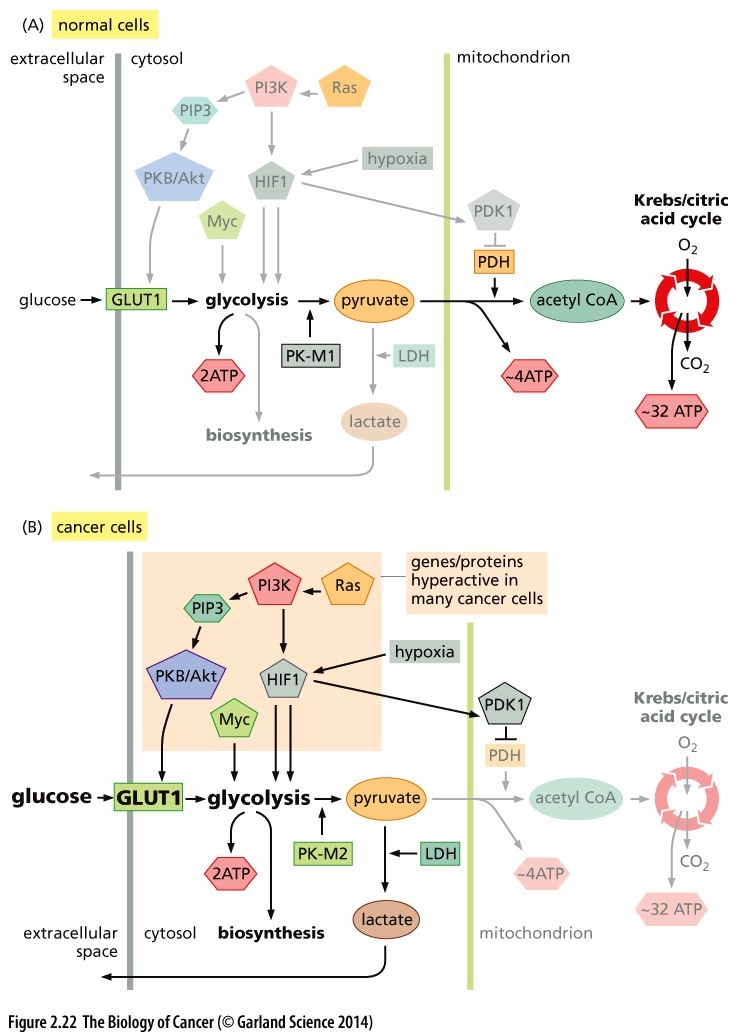 Figure 1: Comparison of the glucose flux through metabolic pathways in normal and cancer cells. A) In non-proliferating cells, glycolysis converts imported glucose into pyruvate (yielding 2 ATP in the process). Pyruvate is transported to the mitochondria where it converted into acetyl CoA (yielding 4 ATP), and finally metabolized in the Krebs cycle (generating 32 ATP). B) In Cancer and normal proliferating cells, entry of pyruvate into the mitochondria does not occur. Instead, lactate dehydrogenase converts pyruvate into lactate (yielding only 2 ATP/molecule of glucose). © 2014 from The Biology of Cancer, 2nd Ed. by Weinberg. Reproduced by permission of Garland Science/Taylor & Francis Group LLC.

The classical explanation for the purpose of aerobic glycolysis in cancer is that tumors sacrifice the ATP that could be gained from mitochondrial respiration in favor of more carbon sources (in the form of glycolytic products) for growth and proliferation. This explanation is attractive because tumors ARE continually in a growth phase, and DO require increased biosynthesis to maintain that level of growth. However, a recent review article has cast doubt on the theory that the main purpose of the Warburg effect is to provide fuel for biosynthetic machinery. 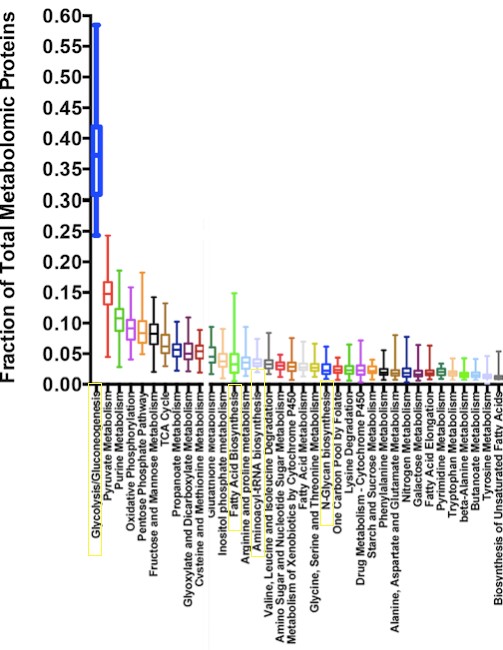 Figure 2: Comparison of the amount of proteins needed to perform key cellular activities. The leftmost blue bar shows that almost half of all metabolic proteins are dedicated to glycolysis, as compared to lower levels of proteins dedicated to biosynthetic programs. Modified from Madhukar, Warmoes, and Locasale, Organization of Enzyme Concentration across the Metabolic Network in Cancer Cells. PLOS, 2015.

Instead, research has suggested that the Warburg effect is beneficial to cancer cells because of the changes it produces in the tissue surrounding the tumor (i.e. the tumor’s microenvironment). Alterations to the tumor microenvironment may aid in cancer progression in three ways. First, as previously mentioned, the lactate that is produced as a result of increased glycolysis is secreted into the extracellular environment. The resultant accumulation of H+ and drop in pH have been proposed to disrupt normal adjacent tissue organization, thereby allowing tumors to invade and colonize new regions (Fig. 3). Second, research has shown that tumor-secreted lactate can activate tumor-associated macrophages, which in turn promote tumor growth. The relationship between tumors and pro-tumor M2 macrophages has been discussed on this blog previously. Finally, glycolysis necessitates an increased rate of glucose uptake as compared to mitochondrial respiration. As such, tumors may simply uptake more glucose than neighboring cells. With a scarce supply of glucose, adjacent immune cells (e.g. tumor infiltrating lymphocytes) cannot kill the tumor. 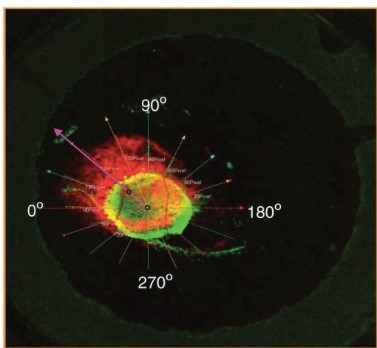 The true purpose of The Warburg effect is most likely a combination of some or all of the reasons described above (as well as some not mentioned in this blog). After all, part of what makes cancer so deadly and difficult to treat is the multiple ways that it deregulates normal cellular functioning in service of its own survival and growth.