Bavituximab is a monoclonal antibody that binds to phosphatidyl serine (PS), a molecule this is expressed in the inner side of the cell membrane. The drug is being developed by Peregrine Pharmaceuticals for the treatment of non-small cell lung cancer and is in a late stage trial called SUNRISE –  A Phase III, Randomized, Double-Blind, Placebo-Controlled Multicenter Trial of Bavituximab Plus Docetaxel Versus Docetaxel Alone in Patients With Previously Treated Stage IIIb/IV Non-Squamous Non Small-Cell Lung Cancer.

In a randomized Phase 2 trial of patients with non-small cell lung cancer, the addition of Bavituximab to docetaxol chemotherapy showed a trend toward increased overall survival (median 11.7 months versus 7.3 months), progression-free survival, and overall response rate. The Phase 3 study is powered to detect a statistically significant difference based on the trend observed in the Phase 2 trial.

Bavituximab is a checkpoint inhibitor, which we have discussed on this blog previously. In a nutshell, checkpoint molecules are expressed as part of the second wave of immune attack against tumor cells in order to abrogate the immune response against antigens. Checkpoints restore homeostasis following an immune response.

Cancer cells exploit this mechanism by expressing checkpoint control molecules in order to stave off the immune attack. Cancers express several molecules, including PD-L1 (PD-1 ligand) and phosphatidyl-serine in order to accomplish this.

Phosphatidylserine (PS) is a phospholipid normally residing in the inner leaflet of the plasma membrane and becomes exposed on tumor cells, and exposure is enhanced in response to chemotherapy, irradiation and oxidative stresses in the tumor microenvironment. PS exposure in tumors promotes an immunosuppressive microenvironment which includes the recruitment of myeloid derived suppressor cells (MDSCs) and M2-like macrophages. Binding of antibodies PS targeting antibodies on tumors triggers an Fc-FcR mediated pro-inflammatory cytokine response that reactivates the immune system and enhances anti-tumor immunity by blocking the immunosuppressive action of PS. 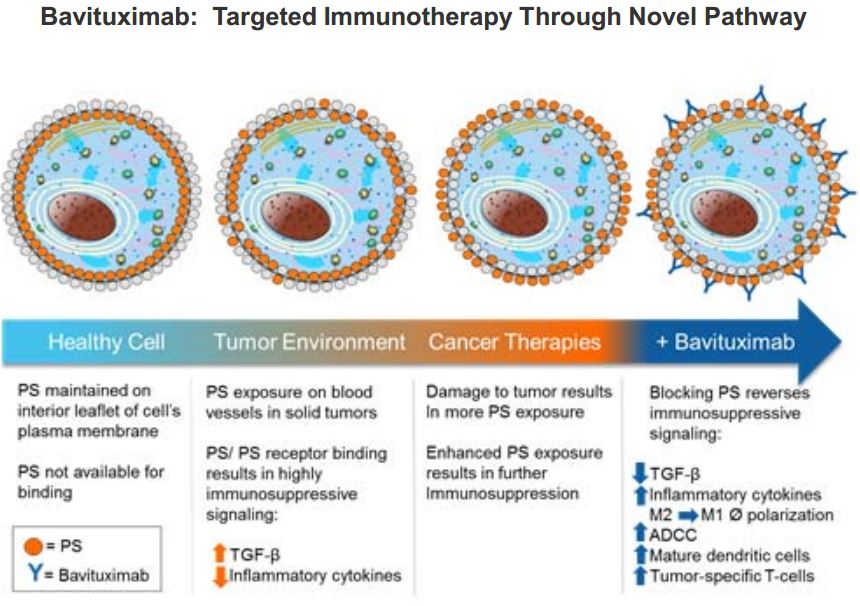 The make-up of macrophages in a tumor environment is critical. According to a study done by John Condeelis and Jeffrey Pollard published in 2006, macrophages are “at the center of an invasion microenvironment.” They note a strong correlation “between macrophage density and poor patient prognosis … there is a strong association between poor survival and increased macrophage density in thyroid, lung, and hepatocellular cancers.” These immune cells facilitate tumor cell angiogenesis, extracellular matrix breakdown, and also promote tumor cell motility. Their research shows that communication between macrophages and tumor cells allows the latter to invade and navigate the blood stream (intravasation). These tumor cells require some support from the stroma in order to fully grow. In the stroma are fibroblasts, adipocytes and blood – all of which exhibit the ability to enhance tumor progression to some degree. In a more recent report by Pollard and Bin-Zhi Qian, they state that “defined sub-populations of macrophages are responsible for these tumor-promoting activities.”

During invasion, hematopoietic cells, which include the tumor-associated macrophages, are also recruited to tumor sites. Condeelis and Pollard believe that there are two important findings that shed light on the role of macrophages in cancer progression:

After tumor cells progress towards malignancy, however, “the macrophage phenotype changes from the ‘inflammatory’ type to one that resembles macrophages that promote tissue formation during development.” When the host undergoes inflammation, macrophages can act as the first signal response cells. They can find the antigens and mark them for the rest of the immune defense response. This process involves matrix remodeling, epithelial migration and angiogenesis. Tumor cells can then recruit macrophages and create microenvironments by causing them to alter their roles to those found in repair, and making use of “their matrix remodeling capacities, synthesis of growth and angiogenesis factors, and their engulfment of apoptotic cells.”

M2 macrophages promote tumor growth, angiogenesis, and invasiveness. M1 macrophages attack tumor cells and help present antigens to the immune system. Bavitimax has been shown to change the make-up of macrophages in the tumor environment. 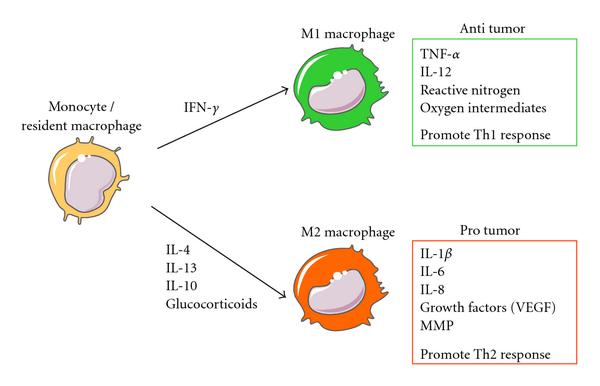