Multikine is a new product being developed by CEL-SCi for front-line use in patients with head and neck cancer. I observed a presentation at the 2015 Biotech Showcase on January 12, 2015. A late stage clinical trial is currently enrolling – Phase III Study of LI [Multikine®] Plus SOC (Surgery + Radiotherapy or Surgery + Concurrent Radiochemotherapy) in Subjects With Advanced Primary Squamous Cell Carcinoma of the Oral Cavity/Soft Palate vs. SOC Only.

It is anticipated that enrollment (880 patients) will be complete by the end of 2015. Follow-up of patients will ensue until 300 events are observed, at which time, statistical analyses will be performed. The primary endpoint of the study is overall survival; secondary endpoints include progression-free survival, loco-regional control of the tumor, and quality of life. This is the largest study ever performed in head and neck cancer, which is being supported by the US Navy. 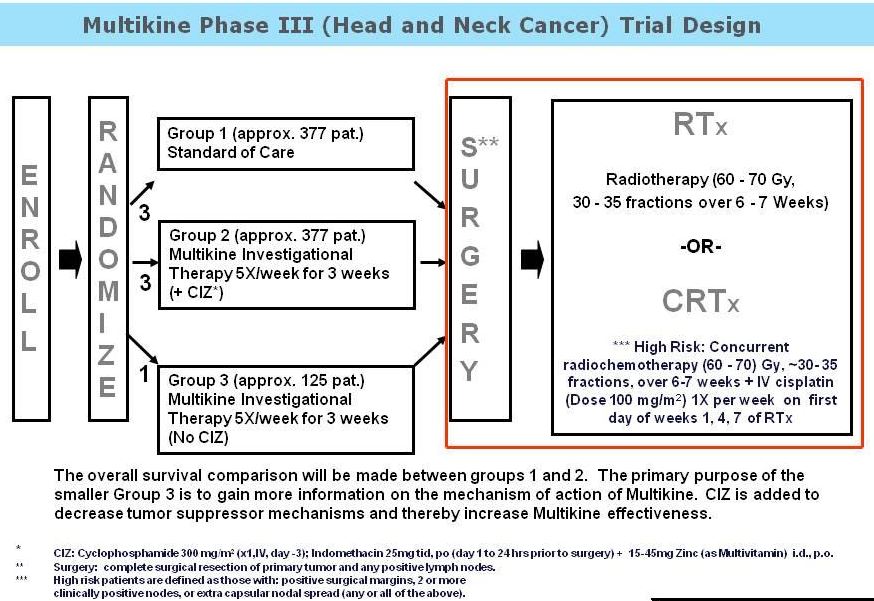 Multikine is administered peri-tumorally, as well as peri-lymphatically at the site of the draining lymph nodes. The rationale for this is to recruit antigen presenting cells to the site of the tumor where the cancer cells are induced into the cell cycle phase to present antigens and to increase susceptibility to radiochemotherapy, and to help stimulate a robust CD8+ cell-mediated response in the lymph nodes mediated by CD4+ helper cells.  Per-tumoral injection can also lead to direct cellular toxicity to the cancer, thus, Multikine is considered to be both a passive and active immunotherapy. 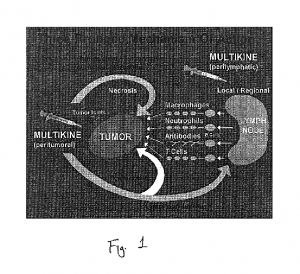 Multikine is a complex biologic, a mixture of specific cytokines in defined relative ratios to IL-2. The cytokines were selected because they have been shown to be elevated in patients who have experienced response to therapy (of interventions other than Multikine, such as, radiotherapy, chemotherapy, and surgery). The premise is that administration of the same collection of cytokines could induce more patients to respond to treatment with surgery and radiochemotherapy.

Clinical and pathology data from Phase I and Phase II clinical trials with the Multikine investigational therapy published in peer reviewed scientific journals (Timar et al 2003 and 2005) suggest that Multikine has the potential to produce an anti-tumor response, as the reported data from these early-stage studies suggests:

The different cytokine and small biological molecules that constitute Multikine are  derived from the lectin (PHA) in vitro stimulation of human peripheral blood mononuclear cells that include T cells, B cells, and macrophages.

Multikine does not contain the following cytokines and other small biologically active molecules: IL-4, IL-7, and IL-15, TfR, sICAM, PDGF-AB, IFN-α, EPO, LTC 4, TGF-β2, FGF basic, Angiogenin, sE-selectin, SCF, and LIF. Multikine® contains only trace quantities (just above the level of detection of the assay) of IL-12, and LTB 4.

I hope the Phase III trial is positive.