The Sonic hedgehog (Hh) pathway is known to be important in basal cell carcinoma (BCC), which as an extremely common skin cancer that only rarely invades and metastasizes. An approved drug for patients with advanced BCC, Vismodegib (Erivedge), interferes with the Hedgehog pathway. The Patched (12 membrane-spanning receptor protein) normally disables Smoothened (7 membrane-spanning protein) rendering it functionally inert. This maintains transcription factor Gli in a cleaved state, acting as a transcriptional repressor. When Hedgehog proteins bind to Patched, Smoothened is released and protects Gli from cleavage. Uncleaved Gli travels to the nucleus and is an inducer of transcription, increasing Cyclin D1 and stimulating the cell cycle (proliferation). Vismodegib blocks the actions of Smoothened. It is administered orally in 150 mg capsules.

Researchers genetically profiled nearly 300 basal cell carcinoma (BCC) samples, and found additional recurrent mutations — including ones in MYCN, PTPN14, and LATS1 — that appear to drive disease. Basal cell carcinoma is one of the most common human cancers, affecting some 2 million people a year in the US, according to the American Academy of Dermatology, and is thought to be mainly caused by exposure to ultraviolet light.

But by using an algorithm they developed that accounts for the background mutation rate per nucleotide, the researchers also uncovered 28 significantly recurrent mutations in 14 genes, including mutations in LATS1, SMO, MYCN, STK19, TP53, ERBB2, and PPP6C.

A Closer look at PTPN14

The protein encoded by this gene is a member of the protein tyrosine phosphatase (PTP) family. PTPs are known to be signaling molecules that regulate a variety of cellular processes including cell growth, differentiation, mitotic cycle, and oncogenic transformation. This PTP contains an N-terminal noncatalytic domain similar to that of band 4.1 superfamily cytoskeleton-associated proteins, which suggested the membrane or cytoskeleton localization of this protein. It appears to regulate lymphatic development in mammals, and a loss of function mutation has been found in a kindred with a lymphedema-choanal atresia.

Protein tyrosine phosphatase, which may play a role in the regulation of lymphangiogenesis, cell-cell adhesion, cell-matrix adhesion, cell migration, cell growth and also regulates TGF-beta gene expression, thereby modulating epithelial-mesenchymal transition. It mediates beta-catenin dephosphorylation at adhesion junctions and acts as a negative regulator of the oncogenic property of YAP, a downstream target of the hippo pathway, in a cell density-dependent manner.

The Hippo Pathway and YAP

The Hippo pathway consists of a large network of proteins (at least 35 in both D. melanogaster and mammals have so far been identified) that control the growth of different tissues during development and regeneration, as well as in pathological states such as cancer. The heart of the Hippo pathway comprises a core kinase cassette that consists of a pair of related serine/threonine kinases, mammalian STE20-like protein kinase 1 (MST1; also known as STK4) and MST2 (also known as STK3), and large tumour suppressor 1 (LATS1) and LATS2, together with the adaptor proteins Salvador homologue 1 (SAV1) MOB kinase activator 1A (MOB1A) and MOB1B. These proteins limit tissue growth by facilitating LATS1- and LATS2-dependent phosphorylation of the homologous oncoproteins, Yes-associated protein (YAP; encoded by YAP1) and transcriptional co-activator with PDZ-binding motif (TAZ; also known as WWTR1).

Phosphorylation of YAP and TAZ represses their activity by creating 14‑3‑3 binding sites that cause them to accumulate in the cytoplasm and that also stimulate their ubiquitin-mediated proteolysis. YAP and TAZ, promote tissue growth and cell viability by regulating the activity of different transcription factors, including TEADs and SMADs. 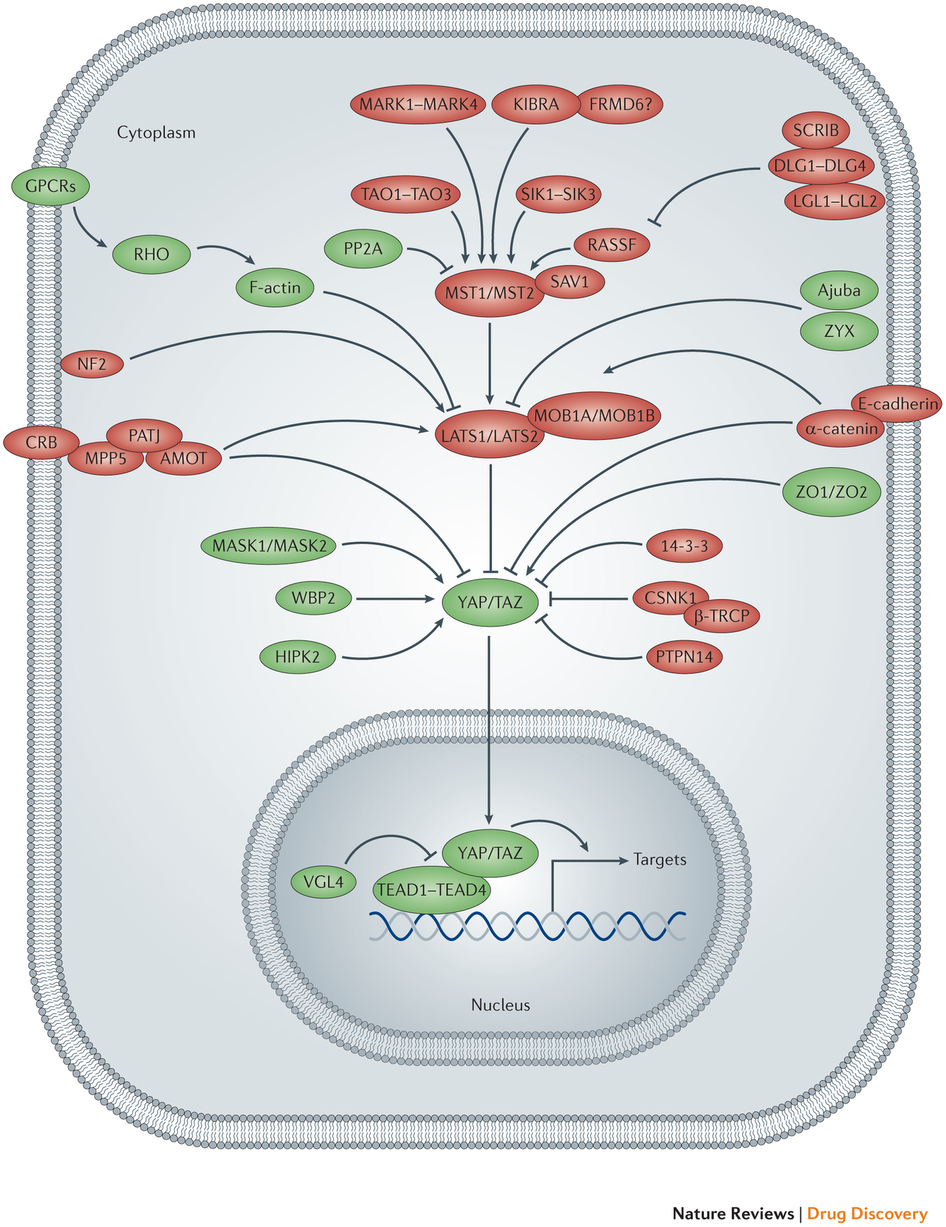 If phosphorylation sequesters and neutralizes YAP/TAZ, how does PTPN14, which is a phosphatase, repress oncogenic activity of YAP?

Given that PTPN14 is a phosphatase, and that LATS1 and LATS2 neutralize YAP and TAZ via phosphorylation, which leads to the non-nuclear localization, How does PTPN14 modulate YAP?

Exactly how YAP1 localization is regulated under various conditions remains to be further defined. It was proposed that when cells reach confluence, cell–cell interaction and cytoskeleton rearrangement trigger a cascade of cell signaling to activate the hippo pathway. Two components in this pathway, MST1/2 and LATS1/2, get activated and coordinate to phosphorylate YAP1 at the Ser127 site. The 14-3-3 protein recognizes the phosphorylated YAP1 and sequesters it in the cytoplasm, which is the suggested mechanism for regulating YAP1 by cell density via the hippo pathway (Zhao et al. 2007). In recent years, several groups, including us, have reported that angiomotin family proteins AMOT, AMOTL1, and AMOTL2 can retain YAP1 in cytosol through a direct protein–protein interaction that occurs independently of YAP1 phosphorylation (Chan et al. 2011; Wang et al. 2011; Zhao et al. 2011; Oka et al. 2012). Since the association between PTPN14 and YAP1 is similar to that between angiomotin protein family members and YAP1, we asked whether PTPN14 could also translocate YAP1 from the nucleus to the cytoplasm.

Exogenously expressed PTPN14 mostly localized in the cytoplasm and partially colocalized with actin filaments at the plasma membrane (Figure panel A). Endogenous YAP1 showed mostly nuclear staining with mild cytoplasm localization in the sparse cells (i.e., low density) (Figure panel A). However, when PTPN14 was overexpressed, we observed a dramatic translocation of YAP1 from the nucleus to the cytoplasm. This translocation was independent of PTPN14 phosphatase activity, as the phosphatase catalytic-dead PTPN14 mutant (PTPN14C1121S) (Barr et al. 2006) could still translocate YAP1 to the cytoplasm. However, the two PY motif deletion mutant of PTPN14 (PTPN14delPY1/2), which disrupts the association of PTPN14 with YAP1, failed to translocate YAP1 to the cytoplasm. Collectively, these findings suggest that PTPN14 can mediate the translocation of YAP1 from the nucleus to the cytoplasm via their physical interaction and thereby inhibit YAP1 transcriptional functions. 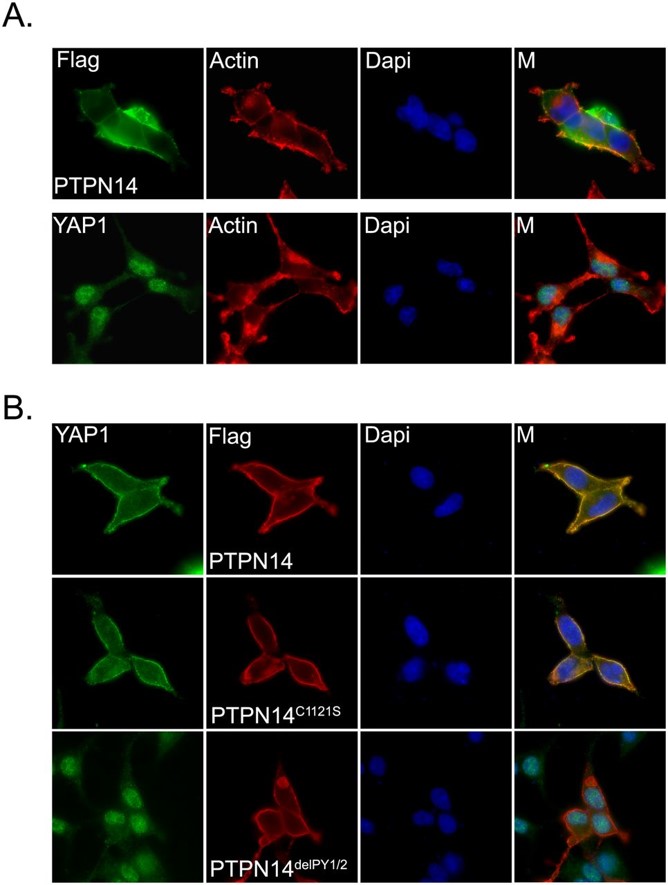 To address whether the binding to YAP1 is required for PTPN14 function in acini formation, we reintroduced shRNA-resistant PTPN14, its phosphatase-dead mutant (PTPN14C1121S), or its two PY motif-deleted mutant (PTPN14delPY1/2) in PTPN14-depleted MCF10A cells using a doxycycline-inducible system. Expression of either wild-type PTPN14 or its phosphatase-dead mutant reduced aberrant acini formation caused by the loss of endogenous PTPN14 and restored the normal acini structures. However, re-expression of the two PY motif-deleted mutant of PTPN14 could not rescue the aberrant acini formation in these cells. These data confirmed that the direct inhibition of YAP1 by PTPN14 is required for normal acini formation of MCF10A cells, which depends on a physical protein–protein interaction between PTPN14 and YAP1 but not on PTPN14 phosphatase activity.

Epithelial and other tissue structures manifest a highly ordered spatial architecture. Over the past decade, our knowledge has greatly increased of how upstream regulatory proteins feed into the Hippo pathway to control its activity. Strikingly, most of these upstream proteins also control fundamental properties of tissues such as ABCP (apicobasal cell polarity), planar cell polarity (PCP) and the adhesion of cells to other cells, as well as to the extracellular matrix. Thus, Hippo pathway activity is tightly coupled to tissue and cellular architecture and function. Derangement of tissue architecture is a fundamental feature of solid human tumours, and thus might underlie the deregulated Hippo pathway activity that has been reported in different human cancers.