A Dutch biotechnology company called arGENX raised $54 MM in an IPO (initial public offering) yesterday to advance its antibody pipeline.  Its lead product, ARGX-110 is in late Phase 1 studies for hematologic malignancies.  It is an immune checkpoint control modulator that acts on the CD70/CD27 axis, which is part of the TNFR superfamily, not the CD28/B7 superfamliy of co-stimulatory molecules.

The CD28/B7 superfamily of co-stimulatory molecules includes CD28, CTLA4, ICOS, and PD-1.  Yervoy (ipilimumab) targets CTLA4 and nivolumab targets PD-1; disruption of binding of these T-cell antigens to their ligands on antigen presenting cells (dendritic cells and cancer cells) results in “cutting the brake lines” on the immune response.  That is to say, these molecules are part of the second wave abrogating immune response.  We have talked about these several times on this blog (http://blogs.shu.edu/cancer/2014/07/09/cancer-immunotherapy-projections-immune-checkpoint-inhibitors-lead-the-way/; and http://blogs.shu.edu/cancer/2014/06/25/nivolumab-phase-3-study-stopped-early-for-efficacy/.) 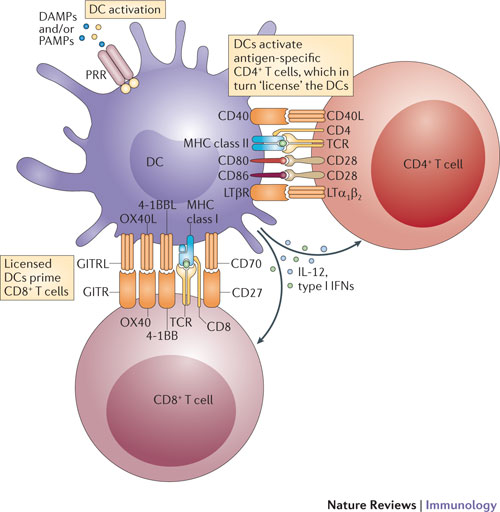 CD27, 4-1BB, GITR (Glucocorticoid Induced TNFR), and OX40 are expressed on the CD8+ effectors (cytotoxic T-cells).  Their cytoplasmic domain interacts with the TRAF (TNF Receptor Associated Factor) family of signal transduction molecules, which trigger the NFkB (via IKK) and AP-1, which leads to proliferation (via myc and Cyclin D1) and induction of IAPs (Inhibitors of Apoptosis), thereby causing activation and expansion of CTLs.  CD27 is important for effector (CTL) and memory T-cell differentiation.  CD70 can also activate the innate (natural killer cell) immune response.

The CD28 / B7 and CD27 / CD70 have different co-stimulatory effects – see diagram from Journal of Leukocyte Biology – Role of CD27/CD70 pathway of activation in immunity and tolerance; http://www.jleukbio.org/content/89/2/195.full 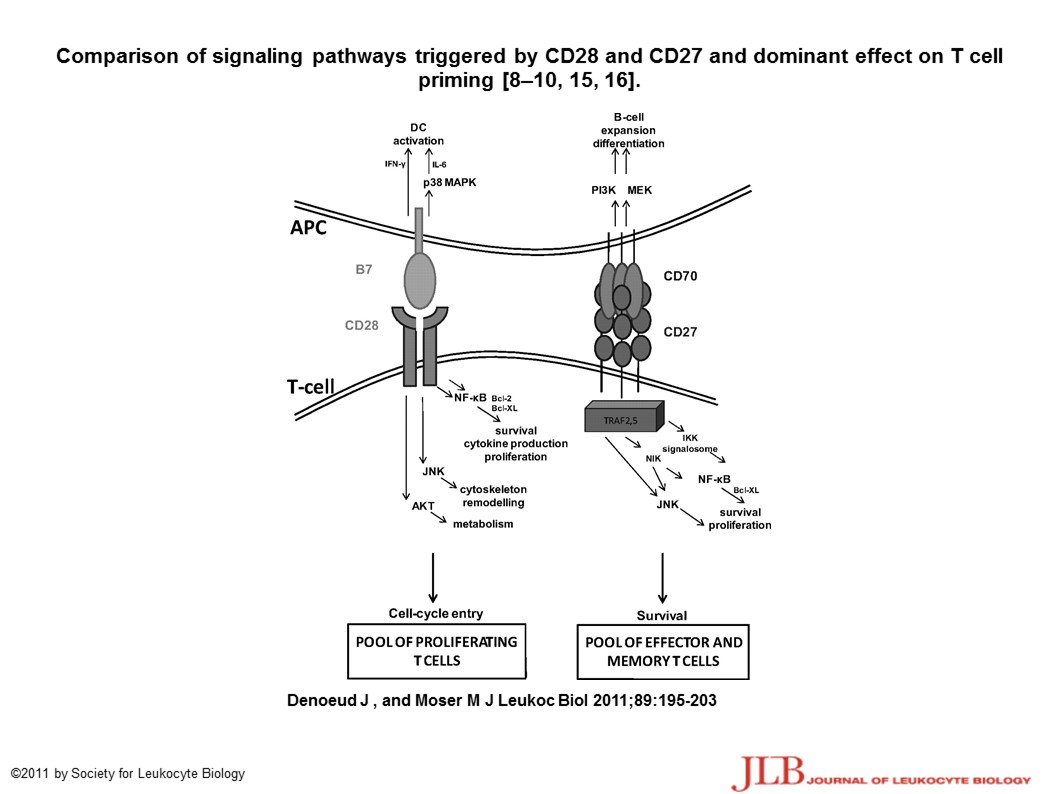 arGENX develops its antibodies using immune cells from llamas, which have a more divergent protein repertoire than relative to humans than do murine immune cells.  Therefore, the immune system of the llama can produce more antibodies to human targets of interest than the murine immune system.  ARGX-110 targets CD70 on dendritic cells; it provides the CD27 signal to dendritic cells, which has been shown to be down-regulated in cancers.

Merck is also developing an antibody (MK-4166) that acts on the GITR co-stimulatory molecules (see http://blogs.shu.edu/cancer/2014/06/12/two-sides-of-immune-checkpoint-control/).  Just like ARGX-110, this antibody is designed to stimulate the TNFR co-stimulatory axis (GITR and CD70), NOT block the axis, as with CTLA4 and PD-1.