Immune checkpoint control is the hottest area in cancer immunology.  Indeed, the checkpoint inhibitors have shown great activity in a variety of cancers.  This article http://online.wsj.com/article/PR-CO-20140506-908279.html)  summarizes 2 approaches that Merck is taking…

The first is with its anti-PD-1 monoclonal antibody MK-3475, which binds to the PD-1 receptor on cytotoxic T-cells CTLs.  These cells mediate immune cellular toxicity against cancer.  Most of the discussion of checkpoint control has been focused on the way this compound, as well CTLA4 inhibitor Yervoy (ipilimumab by BMS) work – they BLOCK the second wave immune response which is responsible for ABROGATING the anti-tumor effect of the immune system.  By “blocking a blocker” (double negative) the “positive” base case wins out, which is an attack on cancer cells.  The immune system can then eradicate the cancer cells.

The target of Yervoy is CTLA4, which is also on the cytotoxic T-cell.  How do PD-1 and CTLA4 differ?  This diagram demonstrates that CTLA4 communicates only with dendritic cells while PD-1 communicates with dendritic cells, cancer cells, and tissue macrophages.  Although in its BLA (Biologics license Application) submitted to the FDA the claim is for patients with melanoma who have failed Yervoy, the hope is that the multiple cellular interactions enable MK-3475 to have activity in many cancers, and potentially in front-line use.  In fact, Merck is sponsoring clinical studies of MK-3475 in 30 different cancer types in addition to melanoma, including non-small cell lung cancer, kidney cancer, breast cancer, and other solid tumors.  BMS is also developing a PD-1 inhibitor (nivolumab) and a PD-L1 inhibitor (MEDI4736, which works on the opposite side of the axis) is being developed by AstraZeneca. 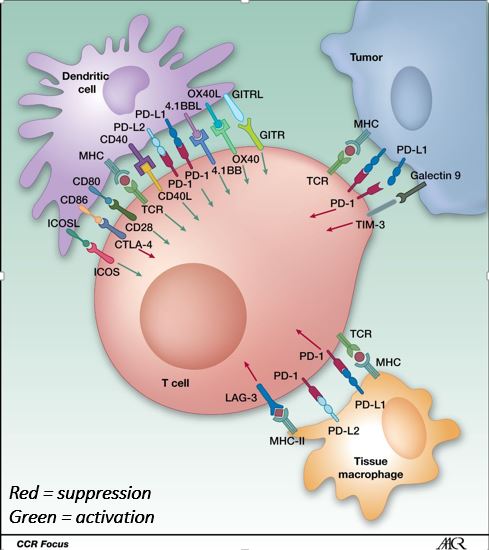 The SECOND of Merck’s immune checkpoint directed therapy discussed in this article is MK-4166, which is an antibody directed against the TNF-receptor.  However, this antibody is designed to ACTIVATE, not block, the TNF receptor because activation of the TNF receptor is important in the first wave immune response against the tumor, that is, the cytotoxic response.  This compound will be starting Phase I studies soon.

In summary – both MK-3475 and MK-4166 are antibodies, but, they act differently: (1) the former is an ANTAGONIST, meaning it blocks the PD-1 receptor not allowing it to transmit signals; the latter is an AGONIST, meaning it stimulates the TNF receptor to signal; and (2) their targets act differently – the PD-1 receptor ABROGATES the anti-tumor immune response while the TNF receptor induces the first wave anti-tumor immune response.