People were asked if they most agreed with President Obama’s feelings about having to think twice about letting a son play football, or President-elect Trump’s statement that head-on-tackles in the NFL are incredible to watch and the league has gone too soft on the issue of head injuries. 59% agreed with the Obama position while only 23% agreed with the Trump statement.

“That is a decisive margin, and belies the embrace the nation’s voters show for Trump’s generally tough stances,” noted Rick Gentile, director of the Poll, which is sponsored by The Sharkey Institute.

The results came from the poll conducted this week among 913 landline and cellphone adult users across the US. The poll has a margin of error of +/- 3.3%.

Meanwhile, the poll asked respondents if they were watching less football, and if so, asked for reasons. 25% cited the protests during the national anthem, 10% said the match-ups aren’t as good, 10% cited too many commercial interruptions, 8% said “too many games on TV,” and 3% said “more interested in election.” 44% indicated either another choice (unnamed) or no opinion. 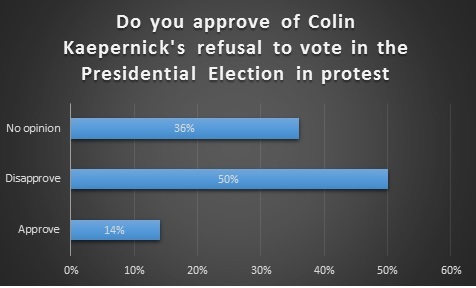 As for Colin Kaepernick, the San Francisco quarterback who triggered the national anthem protests, 50% expressed disapproval over his deciding not to vote in the presidential election, with only 14% showing approval. Only 30% of African-Americans disapproved compared to 58% of white respondents.

By a 2-1 margin (61% to 30%), respondents citied the Trump election victory as more surprising than the Chicago Cubs world championship. The Cubs, of course, had not won in 108 years – but no American president had ever gained the presidency from a business and non-political (or wartime) background.

The poll also asked who would be a better role model, 29% said college athletes, 21% said pro athletes, and 9% said politicians. It is worth noting that 42% said “none” or “don’t know” without those selections being offered by pollsters.

GOOD NEWS FOR MLB – SERIES MADE ONE IN FIVE AMERICANS

There was good news for Major League Baseball amongst the findings – 19% the country said that the Cubs victory made them more interested in following baseball.

“For any sports league to have a single event that might turn that many people into more avid fans is a remarkable achievement,” said Gentile.  “At first glance, one might say, ‘well, it’s only 19%’, but in raw numbers – a fifth of the population is a tremendous number for MLB.”

Rick Gentile will be interviewed by Seth Everett for a podcast on the poll’s findings.

← Sports Poll Cited by Media Across the Country
National Anthem Protest a ‘Turn Off’ for NFL Fans; Nearly 20% Watch Games on Mobile Devices or Computers →