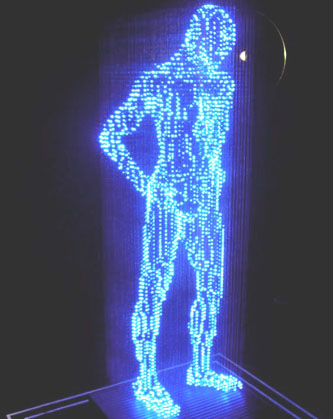 Each year the magazine Popular Science dubs 10 young scientists their “Brilliant 10”, highlighting the scientists’ work and its implications. In the 2010 edition, more than a few of the profiled rely on mathematics. The work of two, Iain Couzin and Paul Rabadan, are especially mathematical and I’ll mention them here.

Iain Couzin, “the Pattern Maker”, works in ecology and biology, and specializes in identifying the rules that underlie the movements of groups of animals.

The shuffle of life—the wheeling of birds, the silver flash of escaping fish—looks mystically organized. Iain Couzin, who models collective behavior in nature, identifies those patterns mathematically. And he’s finding that certain patterns extend across otherwise unrelated units of life, whether bugs or cancer cells.

This is, of course, one of the great strengths of mathematics: once abstracted, it is easy to recognize a pattern that occurs in different places. Some of Couzin’s earlier work—featured in articles in National Geographic and the NY Times, for instance—involved divining the rules that army ant colonies use to direct their devastating raids. His most recent work, mentioned in Discover, provides an explanation for the large migrations seen in so many animal species. The model, if correct, also provides a warning: tampering with the migrating herds, through hunting or habitat alteration, could devastate the migration instinct itself.

Migration could disappear in a few generations, and take many more to come back, if at all. Indeed, bison in North America no longer seem able to migrate, a fate that may soon be shared by wildebeest in the Serengeti. Migration may vanish at a scale measured in human years, and recover at time scales measured in planetary cycles. Raul Rabadan, “the Outbreak Sleuth” has a background in string theory, but his numerical experience is serving him well now in his hunt for the agents behind various biological diseases.

Raul Rabadan hunts deadly viruses, but he has no need for biohazard suits. His work does not bring him to far-flung jungles. He’s neither medical doctor nor epidemiologist. He’s a theoretical physicist with expertise in string theory and black holes, and he cracks microbial mysteries in much the same way he once tried to decode the secrets of the universe: He follows the numbers.

Rabadan has been a pioneer of a data analysis technique called Frequency Analysis of Sequence Data that has been able to pinpoint previously unknown viruses as the cause of major disease outbreaks in various animal (and human) populations. Some of his work focused on tracing the origins of the H1N1 swine flu virus, with articles about the work appearing in Wired and online at CNN and USA Today. Malaria affects hundreds of millions of people throughout the world annually, killing over one million of them. Almost all of these victims live in third-world countries, and many of them are children—one estimate is that a child dies of malaria every 30 seconds. This Newsweek article, by Daniel Lyons, describes Intellectual Ventures, an American start-up that is trying to use first-world know-how to combat the disease. The company got its start when its founder, Nathan Myhrvold, was told by Bill Gates, “Come up with some good ideas and I’ll come up with some money to pursue them.” Some of the inventors mentioned are mathematicians, and one of those ideas is a massive mathematical model of the disease that “lets researchers see the effect of potential vaccines that don’t exist, so they can choose which one to develop.” Other ideas are also mentioned and many of them, as Myhrvold admits, sound farfetched. But really, as Lyons concludes, how can you argue against trying?

Addendum: In another development on the malaria front, researchers at Case Western Reserve University recently developed techniques that can quickly identify drug resistance in strains of malaria. The new technique is expected to “enable the medical community to react quickly to inevitable resistance and thereby save lives while increasing the lifespan of drugs used against the disease,” according to the article “New Methods, New Math Speed Detection of Drug-Resistant Malaria” from ScienceDaily. The key—developed by mathematics Prof. Peter Thomas and a student, Drew Kouri—involved “using a nontraditional mathematical analysis that’s proved more accurate than traditional methods.” (That ‘nontraditional analysis’ mentioned, by the way, was simply switching to polar coordinates.)

This brief article from US News & World Report describes a new mathematical model of ischemic wounds. Ischemic wounds are wounds that do not get as much blood flow as normal wounds, and they affect six and a half million Americans each year. The model, developed by Avner Friedman of Ohio State, includes factors that mimic the actions of healing agents like white blood cells, capillary sprouts, blood-vessel-forming proteins and oxygen concentrations, and is the first to accurately predict healing times for these kind of wounds. The hope is that models like this are “the start of something that could give valuable insight to the wound healing problem in the future.”

This article (Spanish-language) in La Nacion describes work whose roots lie in an old project of Sigmund Freud and Carl Jung, among others. Both of those luminaries spent considerable time and effort on the ‘word association problem’: trying to divine when and why certain words were associated with each other in many people’s minds. Mariano Sigman, Martin Elias and Flavia Bonomo of the University of Buenos Aires applied mathematics to the problem, using a huge corpus of text from newspapers and books to develop a metric which determines how “close” and “far” different words typically are from each other. The associations given by their metric appear to do a pretty good job mirroring the responses people give when given a word and asked to say what pops into their head.

This story by Clive Thompson from the NY Times Magazine examines networks and the signals that travel over them–only the network and the signals aren’t made of wires and electric impulses, the network is the social network of friends and relations and the signals are behaviors. A number of scientists have been using the mathematics of networks to analyze the impact that the behaviors of peoples’ friends and relations have on their own behaviors, and how certain behaviors sometimes get “transmited” through the network in ways startlingly like more physical networks. This article (free registration required) describes some of those scientists and their findings.

The Department of Energy honored 10 of this year’s best scientific visualizations with its annual SciDAC Vis Night awards, at the Scientific Discovery through Advanced Computing conference (SciDAC) in June. Researchers submitted visualizations to the contest, and program participants voted on the best of the best. From earthquakes to jet flames, this gallery of videos and images show how beautiful (and descriptive) visual data can be.

All of these videos are of course essentially illustrations of mathematical models, models that are so complex that just making the individual frames of the videos requires heavy-duty mathematics and heavy-duty computational power.

This TIME magazine article describes a literal marriage between math and medicine: the couple made up of transplant surgeon Dory Segev and his mathematician wife Sommer Gentry. Together, Segev and Gentry developed a new way to more efficiently match kidney donors with the more than 60,000 Americans awaiting transplants. Gentry was also interviewed by various radio, TV, and newspaper outlets.