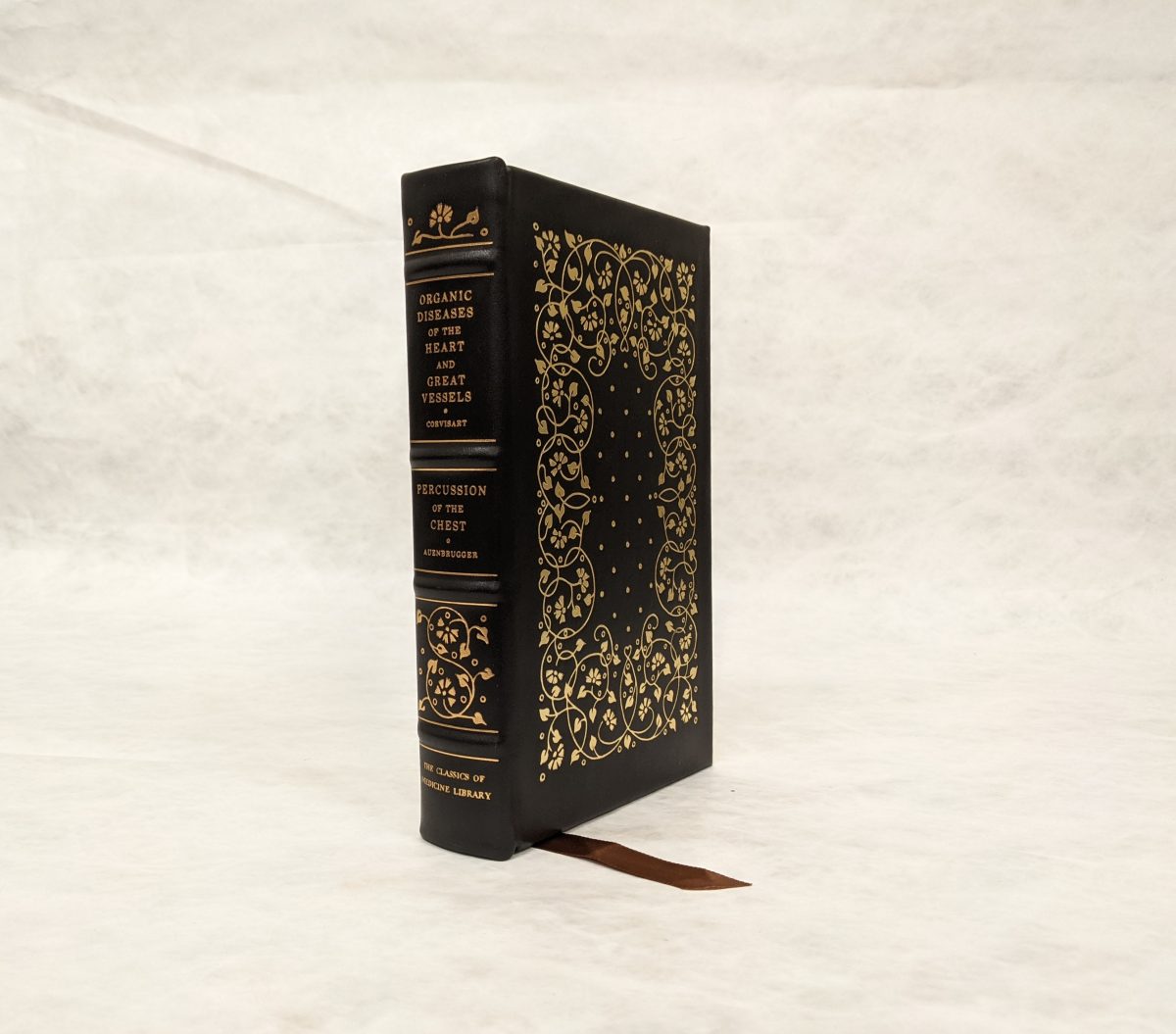 A beautifully bound medical text containing the research of the pioneering 19th century physicians Drs Corvisart and Auenbrűgger was recently donated to Special Collections at Walsh Library by Anthony Valerio, a writer who used it in the research for a biography he wrote. One of the authors, Dr. Corvisart, was Napoleon I’s private physician.  Instead of joining Napoleon I’s campaign to Italy, he stayed behind and translated his predecessor Auenbrűgger’s writings from Latin to French. Auenbrűgger developed the percussive technique of physical examination, which led to the invention of the stethoscope.  His father was a merchant, and young Auenbrűgger played with his father’s wine barrels as a boy, which made different sounds according to how he drummed them, inspiring his later discovery.  These works – and the stories behind them –  inspired Valerio to write his biography depicting a similar medical breakthrough.

Valerio’s book tells the story of the Hungarian physician Ignaz Semmesweis, who did groundbreaking work in obstetrics.  In Valerio’s words, “The field of obstetrics, then, was relatively new. In Vienna’s medical school, which Semmelweis attended, it was an elective of a few months. Dr. Skoda, a famed diagnostician and internist, was Semmelweis’s mentor and teacher. Skoda taught Corvisart’s work on the heart. Upon obtaining his medical degree, Semmelweis sought a job with Skoda but one was not open. Semmelweis then trained with famed surgeon Dr. Karl von Rokitansky, who performed all autopsies in the hospital. Semmelweis obtained a degree in surgery and sought a job with Rokindansky. Again, one was not open. But an assistant’s job did open in a relatively new field,  obstetrics. Semmelweis took this job at a time when childbed fever was the scourge of Europe, the pandemic of his time, women dying of this terrible disease at alarming rates. Theories were advanced as to its cause and means of prevention. Semmelweis rejected them all. He was determined to find those causes and means of prevention—which journey I attempted to describe in detail in my book. Semmelweis did not know what he was looking for. His approach included his studies of Corvisart on the heart, Skoda’s work on palpitation,  Auenbrűgger’s work on the varied sounding of the human body with a stethoscope. Semmelweis read and researched after his daily tour of rounds, in his small room in the Vienna hospital.”

This medical text and the biography it inspired demonstrate that literature can evolve from science, just as scientific advances can be derived from childhood games.  Insight and inspiration know no disciplinary boundaries.

To see this book in person, or investigate other Special Collections materials, our Research Appointments page has details on how to proceed.