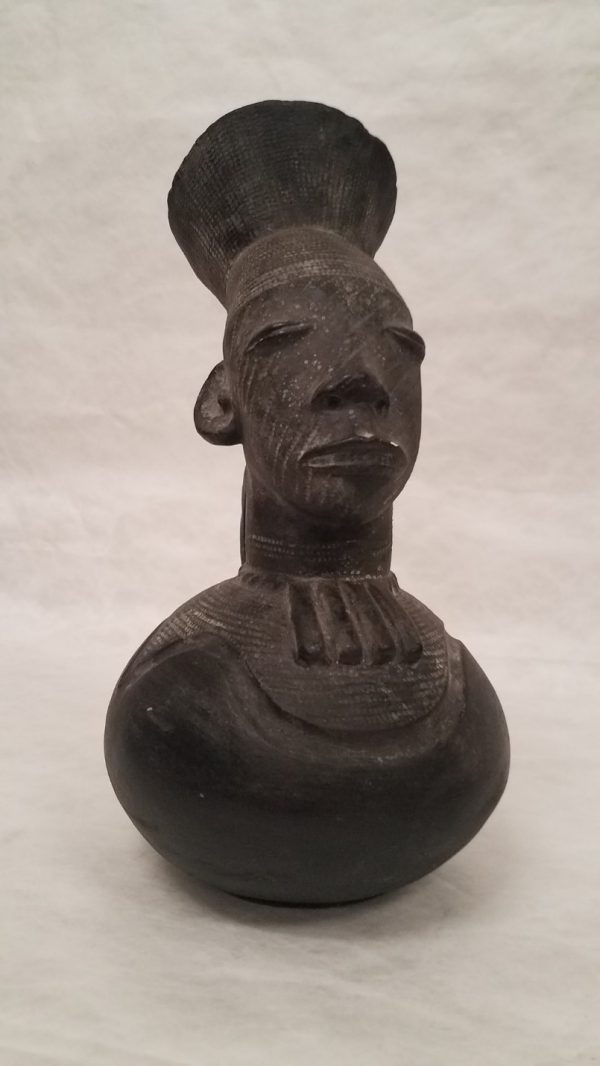 This year’s annual celebration of African American History Month is anchored by the theme “Black Family: Representation, Identity and Diversity,” which focuses on the African diaspora and the spread of Black families across the United States.  This reproduction from Seton Hall University’s Museum of Anthropology and Archaeology is from the Mangbetu peoples of the Democratic Republic of the Congo in Central Africa.  Like other Central and West African groups in the United States, the first Congolese arrived in the Americas as enslaved people during the transatlantic slave trade which endured from the 16th to the 19th century.    Congolese people were often taken to locales in Louisiana and South Carolina.  People from West and Central African regions comprised almost 40% of enslaved peoples in the Americas.[1]

Mangbetu refers to an amalgam of linguistically and culturally related people in the northeastern Democratic Republic of Congo. The group includes the Mangbetu, Meegye, Makere, Malele, Popoi and Abelu. These groups share the common language known as Kingbetu.[2]  Beginning in the 1960s, a new influx of voluntary immigrants from the Democratic Republic of the Congo arrived in the United States, primarily to pursue an education.  Immigration from the country to the United States rose again in the 1990s.  However, this time, Congolese people arrived as refugees due to civil conflicts, violence and economic hardship.[3]  The United Nations High Commissioner of Refugees reports that between 2008 and 2013, approximately 11,000 Congolese refugees arrived in the United States, settling primarily in Texas, Arizona, Kentucky, and New York.[4]

Despite this fraught history, the Mangbetu have held fast to many of their rich cultural traditions.  They are especially known for their pottery, metal work and as makers of musical instruments.  Women potters would have been the primary makers of effigy jugs like this figurative vessel with its characteristic dark, burnished surface.  Though the Mangbetu still make jugs like these, they are now sold to tourists and art collectors rather than used in daily life. [5]  The elaborate coiffure depicted on this jug is characteristic of a traditional Mangbetu woman and is not idealized.

Contemporary Ivory Coast artist Laetitia Ky is inspired by traditional hair styles from African peoples such as the Mangbetu.  Her art is a fusion of hair, design and sculpture.  Ky ‘sculpts’ her hair into the traditional forms she finds in archival images of African women.  Ky then photographs her style and juxtaposes her image next to the historic photograph that inspired her.  She also teaches “Ky-braid” workshops to teach others how to style their hair in traditional African ways.  Ky uses hair as a form of social justice – merging cultural and feminine pride while bringing awareness to issues such as violence against women, gender parity, colonialism and bullying.  Ky uses her TikTok and Twitter accounts to reach the public.[6]

My love for african aesthetic made me start my art with hair. African always been extremely creative when it come to hair, beauty and style…
Here is me trying to do a mangbetu hair style. pic.twitter.com/48t0Hqidab

Laetitia Ky (left) with archival image of an unknown Mangbetu woman that inspired her.

This video shows an array of hairstyles from Africa such as the types that Ky is inspired by.  You can see the Mangbetu hairstyle similar to the effigy jug around the 3:30 timestamp in this celebration of hair.