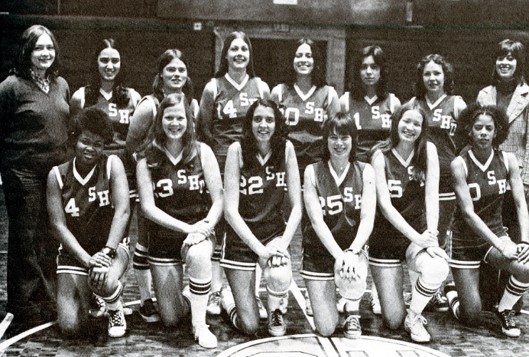 January of 1974 marked the advent of Women’s Intercollegiate Athletic competition on the South Orange campus of Seton Hall which came six years after full co-education was approved by school administration officials.  From the tip, female student-athletes who began the trend of competitive success on the Basketball Court or Fencing “Piste” that Winter (to be joined in the Spring by Swimming and Tennis, and in subsequent years by Softball, Volleyball, Golf, Track & Field and other sports) would ultimately become trailblazers in the annals of Setonia sports history.

Prior to the mid-1970s, women had the opportunity to participate on club or  intramural teams which were more informal than competition between various institutions of higher education.  Known as either the “Pirates” or colloquially as the “Bucettes” (the female equivalent of a Buccaneer, i.e. – Pirate) Women-centered squads were created in part to provide student activity opportunities for all co-eds, but also required as a result Title IX federal legislation.  This public law enacted during the June of 1972 required that all college campuses across the nation establish equity in the establishment of athletic opportunities for both male and female students.  Initially, Seton Hall played a number of local teams across New Jersey and the metropolitan area under the banner of the Association of Intercollegiate Athletics for Women (AIAW) founded in 1971 prior to joining the National Collegiate Athletic Association (NCAA) by the early 1980s.

Fortunately, Women’s Athletics have been documented by the student and local press from the first games ever contested in early 1974 onward.  An account of the start of the Basketball and Fencing programs from that era was covered in detail by Ms. Gail Elrick in an article entitled: “Women’s Sports are alive and well at Seton Hall” published in the 1974 Galleon (Seton Hall Student Yearbook, p. 119) is quoted in part here . . .

“Up until three years ago women’s sports were practically non-existent at Seton Hall.  With the completion of the Women’s Residence hall in 1971, the need for athletic and recreational activities for women became necessary.  In 1971 . . . Volleyball, basketball and softball intramurals were organized.  A women’s fencing team (club) was already in existence and club basketball was introduced.  A very popular activity was a noncredit modern dance class . . . This year the Athletic Department was fortunate to have Sue Dilley as the new assistant director of recreation to head women’s athletics . . . The program greatly expanded due to better organization and an increase of interest . . .  Dilley believes that preparation should begin in college.  If programs are organized in which women may compete, their skills would improve . . . The Recreation Department . . . encourage their participation . . . volleyball intramurals, the first activity planned this year, revealed that some success had been achieved.  There were six more teams than the preceding year.  Intramurals were also offered in basketball, softball tennis, swimming and badminton . . . Plans are to advance one club sport to the varsity level each year.  Basketball was raised to the varsity status, joining fencing as the only two women’s varsity sports . . . As these opportunities are taken advantage of, more will become available.  Women have to prove themselves by actively participating in organized athletics.  The Recreation Department’s job is to organize and preside over activities, while it will always be the students that keep athletics alive on campus.”

Reports were also made on individual sports within the 1974 Galleon (p. 120) to compliment the overall article above.  When it came to the inaugural Basketball lineup, Ms. Cathy Meyer gave a detailed account of the establishment of the sport from December 1973 when a call for volunteers was made with 30 answering the call.  After tryouts had completed 12 players were selected to make the squad under Coach Sue Dilley.  They had their first scrimmage with Bergen Community College that month and Ms. Maureen Keenan became the first team captain.  Their inaugural game was contested on January 5, 1974 when the played the City College of New York (L, 33-42) and registered their first victory against Ramapo College by a score of 57-15 on January 19, 1974.  They ended the 1973-74 campaign with a  9-4 record and just missed the AIAW New Jersey State Colleges Playoff of that year, but would rebound to have a 13-5 mark and make the AIAW National Tournament.

Success also came to the Women’s Fencing force of 1973-74 and reporter Ms. Judy Rothrock (also of the 1974 Galleon Yearbook, p. 129-131) wrote the following testimonial for those who competed in épée, foil, and sabre.  “Perhaps the most inspiring sport for women at Seton Hall in the past four years is the women’s fencing team.  Up until this year, it was the only varsity sport made available on the campus.  Its success has been outstanding . . . The team started on a club basis, only to receive varsity status its second year . . . Since that time, the program has been open to all women on campus regardless of fencing experience.  They begin with individual instruction and are immediately included in the dual meets as they improve.  However, there is no long wait before they may participate . . .”  The first contest for Setonia came against Caldwell College and resulted in a 13-3 for the Pirate “Swordswomen” and on the season they hovered around the .500 mark, but this would turn around to consecutive winning records later that decade.

From its beginnings in 1974, the Women of Setonia Athletics have continued their path of sustained play on behalf of their alma mater, individual and team success along with increased popularity that has endured to the present day.  Go Bucettes and Pirate Swordswomen!

Full-text and additional illustrations on Seton Hall Women’s Athletic Teams featured within the pages of our Galleon Yearbooks (1974-2006) can be discovered through online resources of these texts can be found via the following link:  https://scholarship.shu.edu/yearbooks/index.2.html

Additional details on all aspects of the Athletic and Recreation Program at Seton Hall can be found within our Special Collection connected to sports on campus. The link to our ArchivesSpace catalog can be found via the following link:  https://archivesspace-library.shu.edu/repositories/2/resources/420

For more information and questions about the Athletic History of Seton Hall, contact Alan Delozier, University by e-mail at: Alan.Delozier@shu.edu or by phone at: (973) 275-2378.