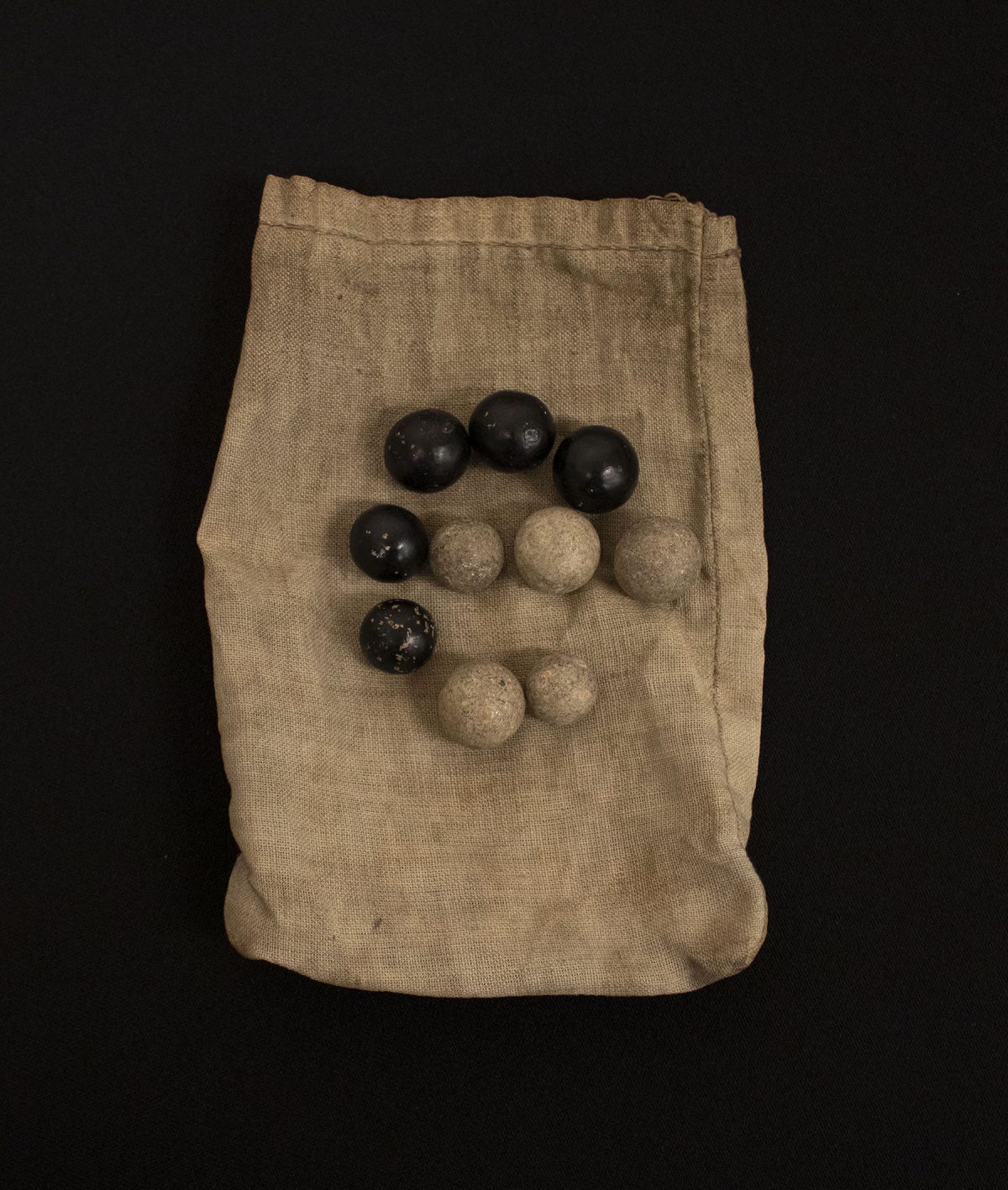 A BRIEF HISTORY OF THE ORDER SONS OF ITALY AND VOTING

The word ballot comes from the Italian ‘ballotta’ – meaning little ball.  Before the use of paper ballots or the invention of voting machines, voters used black and white balls such as these.  To cast a vote in favor of one candidate or issue, a white ball would be dropped into a wooden box.  The black ball would be used to vote against a candidate or a referendum. This method of voting is known to have been used as far back as ancient Athens using clay, instead of wooden balls.  Though the use of paper ballots dates to Rome in 139 B.C.E., the paper ballot did not come into use in the United States until the 1880’s.  New York and Massachusetts were the first states to adopt paper ballots for elections.[1]

Even now many civic groups, private organizations and social clubs still use this ancient system of voting to settle decisions about programs and membership.[2] This set of voting balls was used at the Umberto Primo Lodge No. 750 of The Order of the Sons of Italy[3] in America in Susquehanna, Pennsylvania. The Order Sons of Italy was founded in New York’s Little Italy neighborhood in 1905.  The organization was formed to serve Italian immigrants during the height of the Great Migration (1880 – 1923) when over 4 million Italian men, women and children crossed the Atlantic to settle in the United States.[4] It served as a support system to assist with attaining citizenship, accessing health benefits, locating educational opportunities and assimilating to life in America.  Today, the organization focuses on service and advocacy for the nation’s estimated 26 million people of Italian descent through educational programs, medical research, disaster relief and the promotion of Italian culture, among other initiatives.[5] From its inception women shared equal rights in The Order Sons and Daughters of Italy in America, representing the organization at the state and national levels, including high ranking positions such as president, vice-president and trustee.[6]

Though Greece is often noted as the birthplace of democracy, the four Ballot Laws of the Roman Republic, adopted by the government from 139 to 107 B.C.E., codified the system of secret ballots for; the election of magistrates (judges),  then juries, followed by the legislature and finally, matters of treason.  Prior to the secret ballot, Roman citizens and public officials registered their vote orally.  This public procedure of voting often produced social pressure or even public intimidation to vote a certain way on an issue or for a particular candidate.[7]

Historically in the United States, there have been numerous obstacles to voting and the right to do so was, and for many continues to be, a hard-earned struggle.  It was not until 1869 when the 15th Amendment to the Constitution was passed that black men could vote.  Even with the passage of the amendment, there were many obstructions to voting such as poll taxes and literacy tests.[8] Women were not able to vote until the passage of the 19th Amendment in 1920. It was not until two landmark revisions to the United States Constitution, the passage of the 24th Amendment of 1964, which eliminated poll taxes, and the Voting Rights Act of 1965, which abolished Jim Crow laws[9] – a collection of state and local statutes that legalized racial segregation and marginalized African Americans while denying them equal rights and opportunities – that voting was open to the population at large.[10] The Voting Rights Act, however, is no longer fully intact. The 2013 Supreme Court decision in Shelby County v. Holder undid the provision requiring states with a history of racial bias in voting to get permission before passing new voting laws, which has resulted in stricter voting statutes in some states.[11]

In the last United States presidential election, approximately 55% of eligible voters cast a ballot.  This is far behind other developed countries such as Belgium which had a turnout of over 87% in their most recent elections, Sweden at almost 83% and South Korea which came in third at just under 78% on the list of the top 10 countries with the largest voter turnout.[12]  For more information on voting, visit PLANYOURVOTE at https://www.planyourvote.org.The website is a clearinghouse of information to promote and empower citizens in the exercise of their voting rights. The site provides a plethora of useful information on voting along with links to register to vote, check your voter registration status, and request an absentee ballot. They also have an excellent database of some great works of art on the subject of voting that are worth a look.[13]

The Walsh Gallery has a considerable collection of fine art, artifacts and archeological specimens for use by faculty, students and researchers. For access to this or other objects in our collections, contact us at 973-275-2033 or walshgallery@shu.edu to make a research appointment