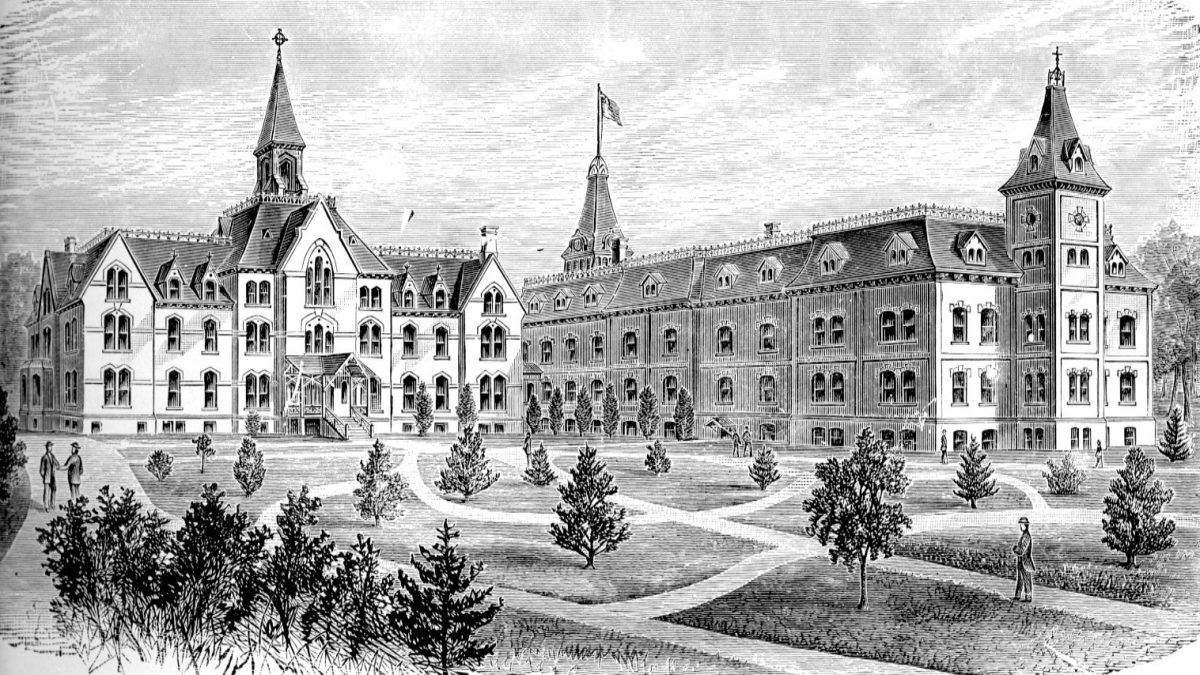 When looking back at the nation and world 150 years ago there were many memorable milestones that have since shaped society in various ways.  These included the start of construction on the Brooklyn Bridge, enactment of the 15th amendment to the United States Constitution allowing African American males the right to vote, and Pius IX declared papal infallibility in matters of faith and morals among others.  On the local front, Seton Hall College was in the process of celebrating its 14th anniversary of operations and tenth on the South Orange campus with its eye to future development as a modest, but growing institution of higher education.

The student catalog(ue) for that year noted that the campus proper: “ . . . is situated near the village of South Orange, distant, by railroad, sixteen and a half miles from New York, and six and a half from Newark: accessible from New York in about an hour.  The College buildings are of great architectural beauty, large and commodious, thoroughly ventilated, well heated by steam, and lighted by gas.  In addition to the buildings represented in the frontispiece, a large stone home has been erected for the Sisters and servants the Wardrobes and Infirmaries . . . The location is upon high ground, overlooking a beautiful country.  The Orange Mountains have long been recommended by physicians as a most favorable residence for their patients.  For years past, the advantages of the surrounding country, for breath, extensive view, and proximity to New York, have been fully appreciated; hence the villas and mansions on every eligible site for miles around.”  This presented the incoming student with a helpful overview of their surroundings and vista if they stayed to experience the entire seven year curriculum in vogue at that time.

Counted among the administrative highlights during this year included the bishopric of James Roosevelt Bayley, first leader of the Diocese of Newark and founder of Seton Hall along with the fourth president of the college, Rev. Michael A. Corrigan, who would later become Archbishop of New York.  Invaluable support was provided by clergy, lay teachers, and representatives from the Sisters of Charity who tended the infirmary.  They were ever cognizant that: “. . . the object of the Institution is to impart a good education, in the highest sense of the word – to train the moral, intellectual and physical being.  The health, manners, and morals of the pupils are an object of constant attention.  The system of government is mild and paternal, yet firm in enforcing the observance of established discipline . . . The better to carry our the design of the Institution . . . For this reason, it is expedient that parents who wish to accrue, places for their sons in SETON HALL should make early application.”  These spiritual and academic mentors managed a diverse student body that not only featured learners from New Jersey and throughout the Mid-Atlantic region, but also from such locales as Alabama, Louisiana, and abroad from Cuba, Colombia, New Grenada, and the Yucatan.

When it came to preparation for college life, each budding student had to arrive in South Orange with the following required articles if they were to be boarding on campus:  “ . . . four summer and three winter suits.  He should also have twelve shirts, twelve pairs of stockings, twelve pocket handkerchiefs, six towels, six napkins, three pairs of shoes or boots, a pair of slippers a cloak or overcoat, and two silver spoons, two forks, and a napkin-ring, all marked with his name.”  In terms of expenses, the board and tuition, use of bed and bedding, $400 per annum, payable half-yearly, in advance.  Washing and mending of clothes and linen, $20.  Physician’s fees medicines, etc., $10, Music, $60, and drawing, $50 per annum, for those who wish to learn them.  For use of Piano, $10 per annum.  The German, Italian, and Spanish Languages, each $25 per annum.  Each of these costs represented a substantial investment by parents and students alike prior to the greater inflation associated with expenditures found in the present day.

Once the student were on campus they encountered an academic year that consisted of two sessions of five months each, commences on the first Wednesday of September, and ends on the last Wednesday of June at which time there was a public Exhibition and Distribution of Premiums.  At Christmas there was a vacation of ten days; and in the spring, absence for a day or two will be allowed, when necessary, for the summer equipment of the students.  At no other time were they permitted to leave the College, except for reasons of great importance.  The regular visiting day for parents was on Thursdays.  In addition, weekly reports of all the classes are read before the Professors, Tutors, and Students.  Monthly reports are sent to the parents or guardians.  Below you will find a copy of the academic year calendar that each student followed per term . . . 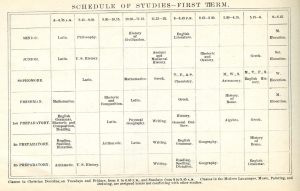 When it came to the “Fundamental Rules of Discipline” which guided student conduct, this showed the correct ways from staying out of trouble and maintaining decorum among the student body.  These guidelines included the following examples: “The Rules of the College require of all Students a manly bearing and kind, courteous deportment towards each other at all times; application to study during the hours of study, and the through preparation and recitation of the lessons assigned . . . No Student ever leaves the College grounds without permission . . . Leaving the College grounds after nightfall subjects the Student to expulsion . . . The use of tobacco is forbidden . . . No other books other than text-books and works of reference recommended by the Professors can be held by the Students, unless by permission of the President . . . Students are not allowed to receive newspapers, except for their Reading-room, which is under the direction of the President . . . Correspondence is permitted only with parents, guardians, and relatives . . . “  These limitations and other items were part of the student experience along with making sure they paid close attention to their physical health through visits to the college gymnasium and the required classrooms to attend to their proscribed study schedules.  This summary provides but a capsule look at the life encountered by the Setonian of 1870.

For more details about Seton Hall during the 1870s digitized Student Catalog(ue)s and Bulletins can be consulted via our eRepository site at – https://scholarship.shu.edu/undergraduate_catalogues/  and for other queries concerning University History you can e-mail us at – Archives@shu.edu for more information.  Thank you for your interest.