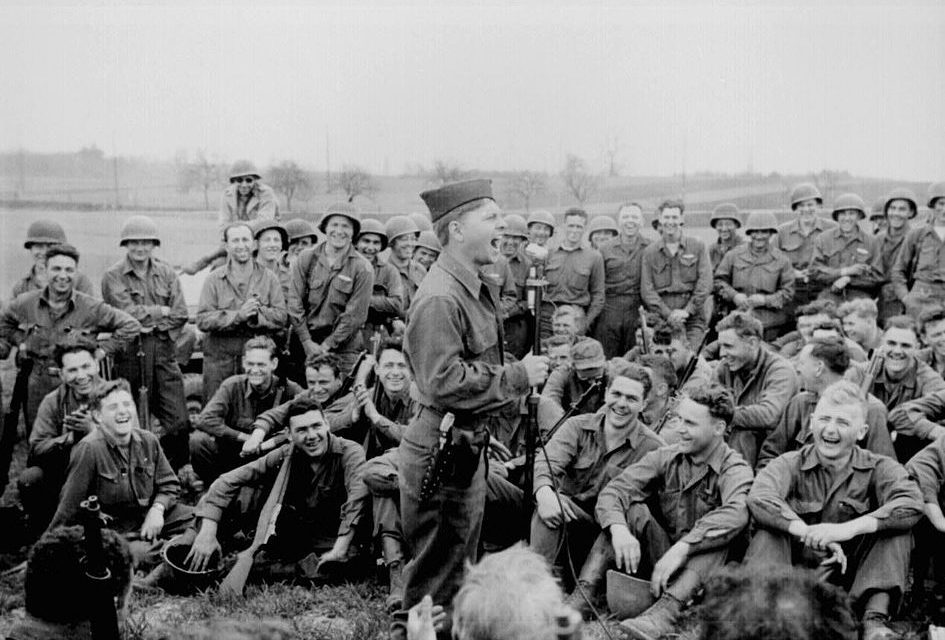 By Macarena Solis and Benjamin K.

Whether it’s music, sports or cinema, the entertainment industry ignites passion in Americans’ hearts and has a profound influence on the public. This influence is now being directed to help in the war effort.

Perhaps there are none better than those in the movie industry for bringing entertainment to the population. Frank Capra has stood out in particular, with his multi-part film series entitled “Why We Fight,” a collection of captivating and emotional films explaining how the war began and giving his view as to why America must continue in the face of the Axis adversary. It is rumored that Capra will be releasing as many as five more parts to the series.

And what better example to show the patriotic message behind the film industry than last year’s Sergeant York? The film starred Gary Cooper as Alvin C. York, the real-life military hero of the Great War. Director Howard Hawks attempted to portray York’s story in a way that evoked the patriotism and hope needed during these times of struggle. “It was based on a man who was actually was very religious,” said Hawks. “And so they told him to do everything his religion said not to do, and he became a great war hero doing it.” The film was not necessarily about religion. The takeaway was intended to enlighten Americans on the necessity of war, to protect liberty and defend the greater good.

Another film that, though it came out several years ago, has continued to tickle the funny bones of many in regard to the situation in Europe is The Great Dictator, by Charlie Chaplin. The tramp acts as a reimagined Adolf Hitler and makes a mockery of the German leader and the political climate that preceded this Second World War. The film industry as a whole has provided the U.S. with more than just entertainment—it has given Americans something to come together for, sitting down maybe once a week educating themselves, enthralling themselves, or enjoying themselves.

Much support for the war is coming from the music world as well. Inspiration is a necessary source of fuel for quality music to be produced, and while this war may not be the most pleasant of muses, it is definitely one of the most potent. Irving Berlin, the master lyricist of our generation, has covered a variety of topics related to the war, from the importance of paying one’s income tax to simply singing about the American way of life. The most recent music from the composer radiates patriotism and American pride. Prime examples include “Any Bonds Today?,” “I Paid My Income Tax Today,” and “Arms for the Love of America,” dedicated to the Red Cross.

Arguably the most notable of Berlin’s compositions is “God Bless America.” Although Berlin wrote it during the First World War, the rousing rendition by contralto Kate Smith has made the patriotic hymn more popular than ever. Her booming voice is enough to compel anyone to stop whatever they’re doing and listen in awe at the range of her vocals and the passion in her tone. Smith has also been a strong supporter of buying bonds since the start of the war. She has hosted several War Bond Drives on popular radio stations such as WJSV of Washington, D.C.—during some of Smith’s bond-promoting efforts, she has stayed on-air for nearly nine hours. This year, the Treasury Department officially declared Oct. 28 “Kate Smith Bond Day.”

Singers and musicians are not the only ones bringing enthusiasm to the war effort; athletes are also making positive contributions. Many players in America’s favorite pastime have had to trade their spikes and stirrups for Army uniforms. One of the first to be drafted was Hugh “Losing Pitcher” Mulcahy, a Philadelphia Phillies right-hander known for losing 76 games over the course of his career. He recently commented to Sporting News that his “losing streak is over for the duration.” Mulcahy claimed that now he is on a “winning team.”

Much of this would not be possible without the help of the United Servicemen’s Organization (USO), whose contributions to the industry have been irreplaceable. Since its founding last year, the USO has quickly become the “home away from home” for soldiers overseas by providing entertainment for the troops, primarily through live music performances and celebrity visits. Actor and comedian Bob Hope has already performed with the organization twice, providing his support for the war effort through comedic relief in his stand-up performances. Singer Bing Crosby has also performed for the USO alongside Hope. 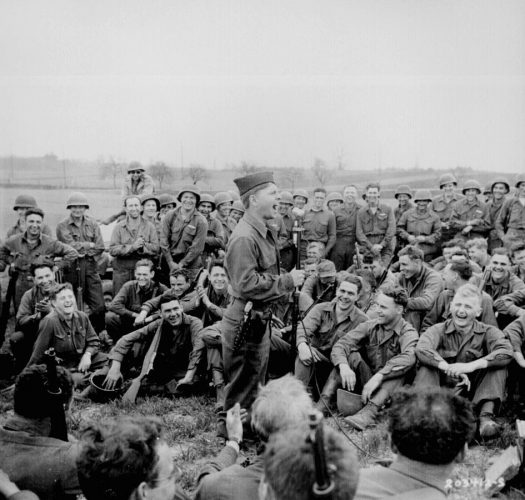 Actor Mickey Rooney entertaining the infantrymen of the 44th Division with imitations of other Hollywood actors. From Wikimedia Commons.

There can’t be a discussion of the entertainment industry and the war effort without mention of the Hollywood Victory Committee, founded last December. More than 20 Hollywood stars were invited to the White House in late April by First Lady Eleanor Roosevelt to be part of this committee, among them actress Joan Bennett and actor Cary Grant. The committee’s latest production, led by Bob Hope and Cary Grant, is the “Hollywood Victory Caravan,” which recently finished traveling cross country performing songs, dances, skits, short plays, opera pieces, and jaw-dropping ensemble numbers. These Hollywood stars are expected to continue traveling millions of miles to entertain soldiers over the next years.

Servicemen are never short of a reminder that people at home are rooting for them. The support coming from the entertainment industry—from the movie directors, to the singers, to the sports players—proves that the real heroes are the men overseas, while the folks back home are their biggest fans.

Wallace, Bosley Crowther. “THE SCREEN IN REVIEW; ‘The Great Dictator,’ by and With Charlie Chaplin.” Nytimes.com. New York TImes, 16 Oct. 1940.