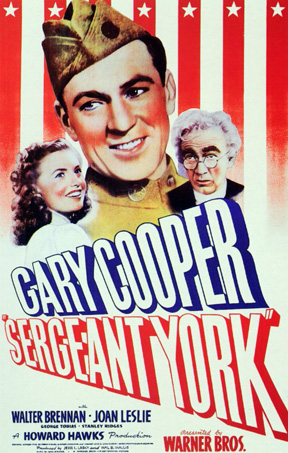 The American people are still coping with the idea of the war and potential atrocities ahead. “Sergeant York,”in which Gary Cooper plays Alvin C. York, a real-life hero of the Great War, brings light to these hesitations. Though a heartfelt and inspiring film, it is difficult to watch without getting the sense of propaganda for war involvement. The film takes us inside the mind of a soldier before and after deciding to fight in a war and shows the inner conflicts that may torment him. In “Sergeant York,” we see the most extreme of cases, a man torn between his religious beliefs of non-violence and protecting his nation’s freedom.

York, one of the most decorated soldiers of the Great War, was a pacifist whose Christian beliefs strongly disapproved of killing and engaging in war. York was determined not to enlist, but despite his efforts, was drafted as a private in the U.S. Army. He remained torn between his beliefs and his urge to fight for freedom. York is eventually swayed by patriotic ideals and an American history book, and concludes that he must fight for the sake of his country, freedom and mankind. The film suggests that his beliefs didn’t need to be compromised when the fight is this great of a cause. Despite his initial apprehension, York turns out to be an exemplary war hero, who leads the capture of 132 German soldiers and gets awarded the Congressional Medal of Honor.

Though strategic propaganda may not be the first things that comes to mind, it is hard to shake the fact that the film comes at quite the opportune time. It wasn’t long ago, that many Americans, like York, were going through the same mental conflict in deciding whether engaging in this dangerous war was the right decision. The film illustrates the division that the nation endured during the time, through a mentally torn York.

The movie does a fine job at capturing American life in countryside Tennessee, emphasizing York’s life at home with his mother and siblings. It portrays the honest living of rural America, taking the audience from small town church services to turkey shooting contests. The town pastor, Rosier Pile (Water Brennan), mostly serves as a representation of York’s desire to abide by his religion. Later on, Captain Danforth (Harvey Stephens), Major Buxton (Stanley Ridges) and other military officials represent York’s patriotic duty.

Though the film had a heart-felt tone, it fell flat in its approach to be patriotically inspiring, resulting in rather cheesy scenes. In one of the most memorable sequences, Major Buxton hands York a book on American History. Buxton gives a captivating speech about the history of the American struggle for freedom, explaining that the freedom the nation has today, and still struggles for, comes at a great cost, and sometimes “it takes all we have to preserve it, even our lives.” He tells York that “all men were pledged to defend the rights of each man and each man to defend the rights of all men.” It was a very inspiring passage indeed, though too many scenes throughout the movie follow this forceful technique at tugging on people’s emotions.

After York reaches the status of war hero, he says he is still “as much against killing as ever”—everything he did during war was to protect his comrades. York managed to shoot down roughly 20 enemy soldiers on his own; he later explains that when he saw his men dropping dead from machine guns, he had no choice but to stop the enemy and save the lives of his soldiers.

Although transparent display of messages like this can come off as a bit vigorous, the film does a great job at digging into what really drives a man to enlist and fight for freedom despite it all. Like York, he contemplates before the fight, whether it is religion, fear, or doubt through his mind, he puts it aside for the greater good. One might say it’s a true example of bravery and heroism. The freedom of the nation has always relied heavily on those who exemplify this bravery. Although the film may seem a bit straightforward with its pro-war message, it excels at exposing a true issue that the nation has faced, the contemplation of whether to fight or remain neutral. It is easy to think of York’s inner conflict as a representation of that division. 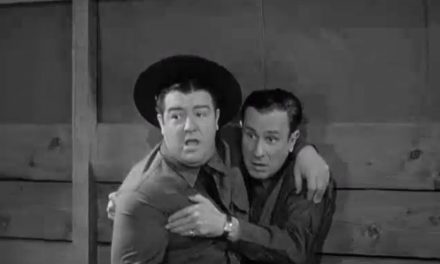