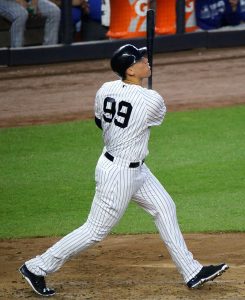 The Seton Hall Sports Poll and its Chief Methodologist, Marketing Professor Daniel Ladik, were featured by ESPN, USA Today, Yahoo, 1010 WINS News and TV News 12 in New Jersey, the Bronx, Westchester, Long Island, the Hudson Valley and Connecticut as part of the regular news rotation over a two day period. The results were also featured in a tweet by former ESPN sports business analyst Darren Rovell, who has more than 2 million followers.

The poll, which is sponsored by the Sharkey Institute within the Stillman School of Business, asked respondents whether they thought that Yankee slugger Aaron Rodgers should be considered the MLB record holder for most home runs in a single season after surpassing the mark set by Roger Maris of 61.

Barry Bonds, Mark McGuire and Sammy Sosa have all hit more than 62 home runs in a single season, but all three have faced fairly widespread allegations of steroid use. Aaron Judge is not suspected of using steroids or any other performance enhancing drugs.

Conducted by YouGov, the poll queried a national representative sample of 1579 adults across the country weighted on U.S. Census Bureau figures for gender, age, ethnicity, education, income and geography and had a margin of error of +/- 2.5 percent.

As noted by ESPN,

According to a new Seton Hall Sports Poll, 56% of sports fans consider Aaron Judge the “rightful single season HR record holder” for MLB, after he hit 62 this yr to break Roger Maris’s A.L. mark of 61. Respondents were told of steroids allegations connected with Barry Bonds’s MLB record of 73 & the top totals of Mark McGwire (70) & Sammy Sosa (66) — & that Judge is not suspected of PEDs use. 21% said they don’t consider Judge the MLB record holder and 23% said they don’t know/have no opinion.

In USA Today, MSN. Yahoo, The Record and a host of other regional papers within the USA Today network, Professor Daniel Ladik, the poll’s chief methodologist, was featured in an article about Judge and his impact on the public perception of baseball and, given the polling data, the public perception of baseball itself. The article, “Yankees superstar Aaron Judge attracts new audience MLB needs, whether he’s struggling or not,” noted

Perhaps there’s been no bigger sports story in 2022 than Judge and his pursuit of history….. in this division series, each time Judge walks up to the plate, the stadium roars with excitement. In many ways, Judge, whether he’s struggling or not, has made baseball relevant again.

Professor Ladik noted “To have Aaron Judge be one of those central conversations [in sports] is really going to push baseball – because baseball needs big stories in order to captivate the American public,” said Daniel Ladik, a marketing professor at Seton Hall University and a baseball fan.

The article further discusses the polling on baseball and fan sentiment toward the sport long known as “America’s pastime.”

Having baseball be part of the everyday sports conversation shows how the sport is becoming exciting again for fans, said Ladik, who was the methodologist behind university polls that took a deeper look at fan sentiment this season.

According to Ladik, data collected by the university shows that football is the most popular sport in America. Baseball remains the second-most popular sport, but basketball is quickly catching up. For that reason, he said, it’s important for America’s pastime to have players such as Judge continue to become household names.

“Without compelling stories, you’re not going to keep the faithful, and you’re not going to attract the new,” Ladik said. “Baseball does have a younger demographic problem at the moment. They are having a harder time attracting a younger, Gen Z population – and we see the rule changes that are coming in 2023 … [will] make the game more exciting.”

Only 21% of sports fans say they do not consider Judge the rightful single season home run record holder.

TV News 12 (New Jersey, the Bronx, Westchester, Long Island, the Hudson Valley and Connecticut all featured the poll, the link is to the Bronx website story but no longer includes the accompanying video which appeared throughout the tri-state area) “Poll: Majority of fans consider Aaron Judge to be ‘rightful’ home run champion”