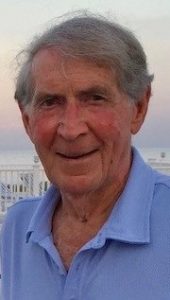 “They are to do good, to be rich in good deeds, generous, ready to share, thus accumulating for themselves as treasure a good foundation for the future, so that they may take hold of the life which is life indeed” (1 Tim 6:18-19).

It is with sadness that I announce the death on Sunday, June 7, of Thomas J. Sharkey Sr. ’54, former student-athlete, regent emeritus of the Board of Regents and friend to the University for more than 60 years.

After graduating from Seton Hall, Tom played professional baseball with the Detroit Tigers for several years and served in the United States Army — before starting a career in the insurance industry.

Tom founded Meeker Sharkey, an insurance brokerage firm in Cranford in 1962. He was a Certified Life Underwriter and had his Chartered Financial Consultant designation. He possessed a sharp business acumen and displayed a longstanding commitment to excellence.

He and his wife, Ruth, have been staunch supporters of Seton Hall and the Immaculate Conception Seminary for many years, making contributions to the Pirate Blue Athletic Fund and to schools across the University. Their generosity made possible the Ruth Sharkey Academic Resource Center, the Seton Hall Sports Poll Conducted by the Sharkey Institute and the Distinguished Visiting Scholars program at our School of Diplomacy and International Relations, among many other initiatives.

Tom Sharkey made service to his alma mater an integral part of his life; he served as a member of the Board of Regents nearly continuously from 1986 to 2015, when he was elected as a regent emeritus. During his time on the board, he served as chair of the successful Ever Forward capital campaign.

Please keep Tom, Ruth and the entire Sharkey family in your prayers.

← By Wide Margin, Public Thinks Medical Experts Should Decide Start of NFL Season, Not Trump
67 Percent of Americans Say No To Indoor Sporting Events Without Vaccine →