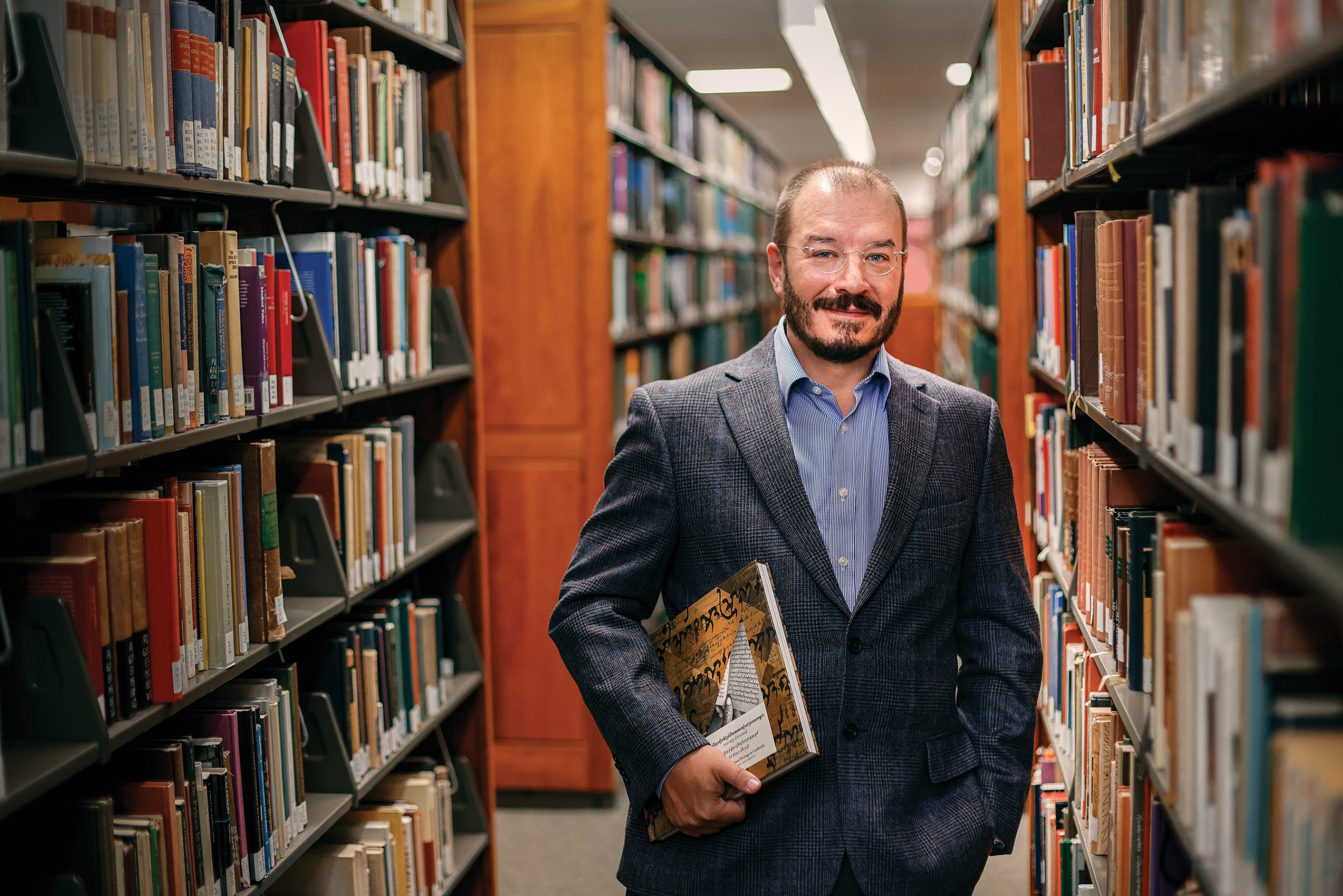 Published November 8, 2021
Jorge López Cortina immersed himself in a program teaching how to write the Cham language using its traditional script.

Growing up on the northern coast of Spain, Jorge López Cortina was forced to confront what he describes as “a complex linguistic situation.” Although Spanish was the dominant tongue, many people spoke Asturian, a language that fellow Spaniards often derided.

“In the time of my parents,” López Cortina recalls, “if you spoke that language in class you would be punished. In my time, you were mocked if you spoke Asturian. I learned very young not to talk about it unless you really want to take sides.”

For López Cortina, an associate professor in the Department of Languages, Literatures and Cultures, coming of age in such a fraught linguistic environment inspired his own curiosity about language. Years later, he found himself immersed in a program to teach how to write the Cham language using its traditional script. Cham is spoken, but rarely written, by Muslims in the overwhelmingly Buddhist country of Cambodia, and he could recall the very similar tensions over language that he had encountered as a boy in Spain.

The story of the Cham language owes much to the diasporic history of the Cham people. Champa was an Indochinese kingdom that reigned for 15 centuries. Spread across what is today central and southern Vietnam, Champa was annexed by Vietnam in 1832. Some of the Cham population migrated to Cambodia, invited there, according to López Cortina, by the Cambodian king.

By the time López Cortina arrived in Cambodia in 2013 while on sabbatical from Seton Hall, several hundred thousand people still spoke Cham, but there was little formal education in it because the official Cambodian language is Khmer. “Most people who can speak Cham cannot read and write Cham,” he says.

López Cortina got involved with the Cham Heritage Expansion Program when a former doctoral classmate at Georgetown University invited him to Cambodia. Alberto Pérez Pereiro, a lecturer at the National University of Singapore, had founded the program in 2011 using a U.S. State Department grant designed to promote the teaching of the written Cham language, and he asked López Cortina to develop a training curriculum for teachers.

“He cares a lot about issues of language maintenance, language preservation, language revitalization,” Pérez Pereiro says, speaking from his home in Cambodia. “I knew this was the kind of thing he was going to dedicate himself to.”

López Cortina had extensive experience in the field, including cowriting a Khmer textbook and writing or editing a dozen Spanish language textbooks for Berlitz International. “At the very beginning, I said let’s take what they’re teaching and put it in a textbook format. We wanted the written version of the language to gain visibility.”

Over the next four years, until the program concluded in 2017, López Cortina developed textbooks that were used to train 36 Cham language teachers, who in turn trained thousands of students. “This is what changed things in the community,” López Cortina recalls.

He credits the Cham Heritage Expansion Program with helping to broaden the acceptance of the language — to normalize, in effect, its teaching and its study. “Before,” he says, “there were people who insisted Cham had to be handwritten. Now they are discussing which fonts should be created for the next generation of textbooks. The discussion is very different from what it used to be.”

López Cortina also edited “Rediscovering Cham Heritage in Cambodia,” which contains text, side by side on each page, in Khmer, Cham and English. It’s the first such book to be published in Cambodia, Pérez Pereiro explains. That these books can be found today in the National Library of Cambodia, López Cortina says, might be the single biggest accomplishment of the Cham heritage program.

But López Cortina is careful — insistent, in fact — not to present himself as the savior of the Cham language. “It’s not about me,” he says. “It’s about helping people to put their culture in a prominent place in a national setting. We plant a seed to start a conversation, and then people will use the language in whatever way they want.”